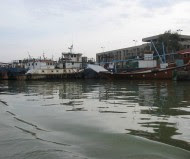 Following the outbreak of the first Arab-Israeli war (in which Iraq took part) the trickle of Jews fleeing harassment and state-sanctioned persecution became a flood. Joe Samuels, now living in Canada, tells the dramatic story of his escape - engineered with help from the Jewish Agency - by boat over the Shatt-al Arab waterway to safety in Iran. (With thanks: Michelle)

In Basra, cold weather in December was unusual, but in 1949 the temperature was in the 40’s, and it was bitterly cold at 11 at night. I had put my life in the hands of two Muslim smugglers, and I wasn’t alone. There were 15 other teenagers, including my younger brother, Nory. The underground movement to help Jews escape out of Iraq had arranged for a boat to take us to Iran. We boarded, one at a time, at varying intervals, in order to avoid raising suspicion in the neighborhood. We had no luggage, money, food, or water.

The boat, if it could be called that, was about 30 feet long by 10 feet wide. It had no seats, beds, toilets or motors. It moved by punting, a method of propelling the boat forward with long sticks. It was designed to carry light cargo such as manure or hay to the farmers in the delta. In their hay cargo, the two smugglers had devised a false space that measured about 10 feet by 10 feet and about 2.5 feet high. We crouched in complete darkness in this dungeon. I was appointed the person in charge for the journey. The first thing I did was make holes in the hay so that we could breathe. Our escape depended on luck, the tide, and the bribed border police.

So that our crossing would coincide with the tide, at about midnight, the two smugglers pushed the boat out of the tributary river. Our beacon of hope, Iran, was downstream and across the river, two to three hours away. The sound of water splashing broke the stillness of the night and was sweet music in our ears. As we moved down the main river Shat el Arab, “the river of the Arab,” our hearts lit with hope for freedom.

However, after about an hour that sweet sound of splashing water stopped. All was quiet except for the sound of the wind. I went out through the hole. The two smugglers looked worried. “We can’t move,” one of the men said, “the tide is with us, but the wind is against us.”

I went back through the hole and told everyone to close their eyes and sleep a bit, while we waited for the wind to subside.

We docked inside a tributary of the river. The hours passed quickly, and I began to worry. My heart was beating faster than the wind, as dawn started to break. We would not be able to move during the day, and were going to miss our rendezvous. What about food, drinks or toilets? What if some villagers were to spot us and tell the Mukhabarat, the secret police? After all, we were leaving Iraq illegally and this was a major or a capital crime.

I couldn’t share my fears with the boys and girls. One boy was only thirteen. Instead, I put on a stoic face and assured them that everything was going to be alright. We had to wait until darkness to move again. Some started to cry. I felt the same way, but I held back my tears.

One of the boatmen went to get some food. I warned him not to buy food in bulk, since that might create suspicion. It was toilet time, in the early morning. One by one we got out of our hole. One boy, a good friend of mine whose brother had been arrested on Zionism charges just few weeks ago, shook so much he couldn’t stand. The boatman returned after an hour with some bread, cheese and dates. Like rats, two or three of us came out of the hole, ate something and went back in, until all the pack was fed.

I was in Arab garb, and wore a long white gown and a Keffiyeh on my head just like the boatmen’s. I wandered away from the boat and sat under a tree in the shade. I closed my eyes and yearned to sleep. I couldn’t. My life passed before me as if on a movie screen.

I remembered the Farhood of June 2, 1941 in Baghdad, when the mobs murdered over 200 Jews and thousands of Jewish homes were looted. I was 11, I survived. At 14 two Muslims boys ran after me with a knife, I overran them, I survived. In May of 1948, after Iraq and four Arab countries failed war against Israel, many Jewish youths were arrested, tortured, or simply disappeared. Once more, I survived.

Just few days ago, the secret police stopped me at the train station when I had arrived from Baghdad. I was with my brother and two other boys traveling to Basra. One of the policemen asked me my purpose in coming to Basra. I told him that I was visiting my cousin. When I mentioned his name, Agababa, the policeman’s eyes lit up and his tone of voice changed. He became sweet and gentle, and said he knew my cousin well. He got his Arrow shirts from him. I knew what he meant. Like what all the secret police did. I survived again. The other two boys were returned to Baghdad. We never heard from them, or saw them again.

Back on the boat, the hours passed slowly. This was the longest day of my life. A river patrol passed by unaware of the human cargo hidden in the stack of hay. I was frightened and frustrated. I began to pray, “God, please let it be night so that we can make our final escape.” I went back into the hole. I assured everyone that by the next morning we would be in Iran and that in a few days we would be in Israel.

Finally, night came. My angels worked overtime. We had the tide and a favorable wind. At the precise time we moved, and before dawn we crossed the river. Three worried men were going crazy looking for us on the other side. They had been there from the night before.

“We are safe, we are in Iran,” I shouted happily. One by one, my fellow rats came out of the hole, drained and haggard; some with tears, others with a smile as wide as the river we had just crossed.

But for me, the needs of so many other people outweighed the needs of family and others who were already free, young as they may have been. Instead of accompanying my brother to Israel, I remained in Iran for two grueling months to assist others escaping Iraq. Unfortunately, not all succeeded as readily as we had in our escape.

After that difficult boat trip, each one of us, sixteen children really, went our separate ways—driven by history and its forces. But in the midst of the sadness and loss of leaving home and family grew the seeds of our future and of the Jewish people.

Afterword: After a public viewing of the movie, The Last Jews of Baghdad, while discussing my escape, a member of our synagogue whom I had known for many years came forward and said, “I was with you on that boat, when we got stuck.” His name is Haskel Abrahami. He had been the thirteen-year-old boy on that day long ago.

Crossposted at Harry's Place
Posted by bataween at Sunday, August 05, 2012