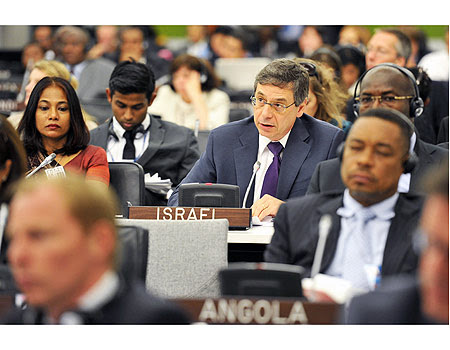 In its piece 'Israel making threats over compensation for Jews', Ynet News has more proof of Arab alarm at reports that the Israeli deputy foreign minister, Danny Ayalon, intends to raise the question of Jewish refugees at a UN General Assembly summit in September. The Arab 'experts' interviewed portray the campaign for recognition and redress for Jewish refugees as a cynical ploy to counter Palestinian rights. They claim that compensation for Jewish refugees' seized property is a matter for Arab states, not Palestinians, to resolve. At the same time they deny that Jews were refugees at all, blaming their exodus on ' the Zionists'. (With thanks: Michelle)

Sky News' Arabia channel aired a feature on the issue under the headline: "Israel's campaign for property compensation for Jews from Arab countries." A senior official at the Foreign Ministry was interviewed in the feature and claimed that UN Security Council Resolution 242 which was made after the Six Day War focused on justice for refugees in general, and nor specifically Palestinian or Arab refugees. The Arab media was up in arms this week over a plan spearheaded by Deputy Foreign Minister Danny Ayalon to hold a summit on the issue of Jewish refugees from Arab countries at the UN in September.

The summit's main purpose is to push forward the matter of property rights of Jewish refugees who were forced to flee Arab countries after the establishment of the state of Israel and to turn the Jewish refugee issue into a bargaining chip which would make it clear that if the Palestinians voice demands for refugee compensation – demands would also be made from the Israeli side.

Hanna Issa, a Palestinian expert on International Law shared his thoughts on the Israeli campaign: "The minute Israel felt there was a decision pressuring it to recognize Palestinian rights, it raised the Jewish problem at an international level so that the matter of Palestinian refugees would be put at the same level as the matter of Jewish refugees, but the issue is baseless.

The story also caught the attention of Algerian newspapers who claimed that Israel was seeking compensation for Jews who fled Algeria. The opening paragraph claims that Israeli threats demanding that Algeria and the Arab nations compensate Jews have begun to sound serious.

The reporter behind the Sky News story said that the "Israeli campaign comes at a time when Palestinians are trying to achieve observer status in the UN."Russia al-Youm, Russia's Arabic website dedicated an article to the issue and interviewed Palestinian officials including researcher Hamad al-Muad who has written dozens of articles and books on Israel and the right of return.

He believes that "Palestinian refugees are not responsible for the property of Jews from Arab countries. They didn't take control of it and the issues of Palestinian property and Jewish property cannot be exchanged."

He further explained that "Israel is trying to claim that Arab countries expelled Jews so they are responsible for compensating them for their lost property. The reality shows that Israel was the one encouraging them to emigrate and created gangs and movements in Syria, Iraq, Lebanon, Egypt and Morocco to ease Jewish immigration."

Deputy Foreign Minister Danny Ayalon refuted the allegations, he told Ynet: "There is no basis to this fallacious claim that Jewish organizations pressured refugees into leaving, and even if they did do so, it does not mean they (the Jews) should have been forced to leave everything behind while having their citizenship revoked and being murdered in pogroms."

According to Ayalon, the State of Israel and other Jewish organizations called on the Jews to make aliyah after their citizenship was revoked. "One of the purposes (of the current initiative) is that there be no permanent agreement without refugee compensation – both Palestinian and Jewish."

Egypt's press has recently shown a great deal of interest in the matter. Several papers have written that following the July 1971 revolution in the country, Jewish property devolved to state ownership under law. The press estimated the property to be worth 1 billion Egyptian Lira.

The local Egyptian press also noted that at the beginning of the 1950s there were some 100,000 Jews in Egypt of which only 25 remain in Egypt today. They are claiming that Israel is demanding the rights to some $21 billion worth of property in the old Jewish quarter of Cairo, including the large Adly Street Synagogue.

Arabs fear the Jews want their property back

slightly o/t
Here is what seems to be a fairly objective summary of the views of a Palestinian Arab Muslim intellectual on Israel and the place of Jews in the Islamic state. Ismail al-Faruqi was a professor of comparative religion at Temple University in Philadelphia, USA.

"al-Faruqi viewed the existence of Israel as an affront towards the religion of Judaism due to its state ideology of Zionism. He said that the injustice caused by Zionism is such as to necessitate war. He proposed a resolution in which Israel is dismantled and its institutions de-Zionised; and that former Israeli Jews who have renounced Zionism would live as an “ummatic community” and move freely throughout the Muslim world: '[Islam] requires the Jews to set up their own rabbinic courts and put its whole executive power at its disposal. The shari'ah, the law of Islam, demands of all Jews to submit themselves to the precepts of Jewish law as interpreted by the rabbinic courts, and treats defiance or contempt of the rabbinic court as rebellion against the Islamic state itself, on a par with like action on the part of a Muslim vis-à-vis the Islamic court.'" [1]

I should add that the summary of al-Faruqi's views on Jews and Israel comes from wikipedia [in the article on him], but nevertheless it seems reliable to me.

What astounds me is how these clowns, both the Arabs and their Western and Jewish apologists, can deny that the Jews were refugees with a straight face.

BTW, Prof. Michael Laskier, now of Bar Ilan Univ, I think, wrote an article: 88. Michael M. Laskier, “Jewish Refugees from Arab Lands” in the Encyclopedia of the Modern Middle East, ed. by Richard Bulliet.
I did not read that article but have read some of his articles specifically on how the Jews were driven out of Egypt, step by step. So the claim that these people were not refugees is totally absurd, as far as I'm concerned.

"The shari'ah, the law of Islam, demands of all Jews to submit themselves to the precepts of Jewish law as interpreted by the rabbinic courts, and treats defiance or contempt of the rabbinic court as rebellion against the Islamic state itself, on a par with like action on the part of a Muslim vis-à-vis the Islamic court.'""

This was the case in Christendom as well. In Medieval (Christian Spain) State law was permitted to put to death Jewish renegades (those who reject their Rabbinic law, not those who converted). In the days of Spinoza he was a pariah both in Judaism and Christianity.
In Islam, according to some contemporary Islamist scholars, Jewish renegades must be killed.

The issue of "combating secularism" as common Muslim-Christian concern that Muslims wanted to introduce into the dialogue with the Vatican just a few years ago, which is part of that same worldview, has passed unnoticed, but they brought it up precisely because they identified that same feature in (Medieval) Christianity. They dropped it because of the Catholic Church's opposition (that would mean alienating the nominal Christians), but it was not dropped from Islamic theology.

This is what the person you're quoting is probably referring to, but the problem is that he is pitting Judaism against Zionism, when in fact Zionism (as we - Sephardim understand the concept and not as the Muslim scholar or many Israelis understand it) is one of the 613 Mitzvot and therefore part of Judaism.

This was in a nutshell but I could develop this topic to include quotes if someone is interested.

Sylvia, this was not just anybody who wrote those words. It was Ismail Faruqi who had a particularly favored career. When he was still in his 20s, the British appointed him to a job in their administration in the Land of Israel. Then in 1945 or 1946, still in his 20s, they made the district governor of the Galilee. This is a good demonstration of British favoritism for the Arabs in Israel under the mandate. He left the country in 1948 and became at various times a lecturer and professor at various Western universities, such as at Temple U in Philadelphia where he was teaching when murdered. That murder is still a mystery but there may have been some involvement by fellow Muslims, even students at the University.

Anyhow, if anybody questions whether the British really were pro-Arab in Israel during the mandate, the favor enjoyed by Faruqi is one good argument among many.

I understood the point you were making.

I guess I should have warned "slight OT on slight OT" but that scholar was not just a comparative religion professor and not just a Palestinian in the employ of the British: he was also an islamization theoricist and implementer for the Muslim Brotherhood. More importantly, he was one of the first organizers of Muslim-Christian dialogue as we know it today.

His statements come from islamic theology according to the brotherhood no matter how pleasantly they are wrapped.
What I am saying is that in the statement you quoted there is a contradiction.

PS: There was a conviction and the murderer, a "new Muslim" American, died while awaiting execution on death row.

Thanx, Sylvia. I always wondered why Faruqi was murdered in a comfortable suburb of Philadelphia. This info is important because the wiki article on Faruqi and other Internet accounts of his death mention possible "political" motives for the murder, which naturally leads people to blame Jews and/or Israel.

He did hate Jews.