Clueless in Cleveland about Jewish refugees

As the campaign for justice for Jewish refugees gathers steam, dissenting voices within the Jewish community question whether Jews are refugees at all. Lyn Julius lambasts Cliff Savren in the Cleveland Jewish News for arguing that the Arab and Jewish refugee cases are not symmetrical. Read her post in the Times of Israel:

They are only asymmetrical in the following way: One group of refugees has been resettled and is now made up of full-fledged citizens of Israel and the West. The other group is, uniquely among the world’s refugees, still festering 60 years later in camps (although these are now more like small towns). Its members depend on the UN agency UNWRA for support and, except in Jordan, are deprived of civil rights and the right to own property and to do certain jobs.

That is exactly why Jewish and Arab refugees should be compared: In the former case, Jews were absorbed, resettled and built new lives, making a vital contribution to Israeli culture and society.

In the second case the Palestinian refugees were allowed by the UN to pass on their refugee status in perpetuity, to the extent that the number of “refugees” has ballooned from about 700,000 to five million, very few of whom were born in Palestine. Not only does the existence of these Palestinians in a perpetual refugee limbo create an obstacle to peace, but to leave them in that state seems both supremely unnatural and an obscene abuse of their human rights for political purposes. In that sense, the resettlement of the Jewish refugees is an object lesson to the Arab side.

We come to Savren’s second argument:

Even calling the Jews from Arab countries “refugees” is somewhat at variance with the core of Israel’s national ethos. Though Jews in Arab countries did flee pogroms and riots to resettle in Israel, from a Jewish perspective they were coming home. The Forward quoted former Knesset member Ran Cohen, who was born in Iraq, as saying: “No one is going to define me as a refugee.” He explained: “I came at the behest of Zionism, due to the pull that (Israel) exerts.”

It’s true that for years Israel treated Jews coming to Israel as Zionist immigrants, not refugees. But there is no denying that the majority of Jews would never have come in such numbers to Israel — where initially they faced harsh conditions in desert tent camps called “maabarot,” insufficient food and inadequate sanitation — unless they felt they had no choice but to leave their countries of birth. It is somewhat cheeky of Ran Cohen to say that he came at the behest of Zionism, when he arrived as a 13-year-old refugee with his family on the Ezra and Nehemiah airlift from Iraq.

Of course, one can be both a refugee and a Zionist, but virtually the entire Jewish community of Iraq was expelled from a homeland they had lived in for 2,600 years. Their assets were frozen and they were allowed to take a handful of cash, only three summer and three winter suits, one pair of shoes, a blanket, six pairs of underwear, socks and sheets, one wedding ring, a wristwatch and a thin bracelet. As the victims of a brutal uprooting and dispossession, Jewish refugees are entitled to justice under human rights law, no matter how much time has elapsed since the injustice was committed. 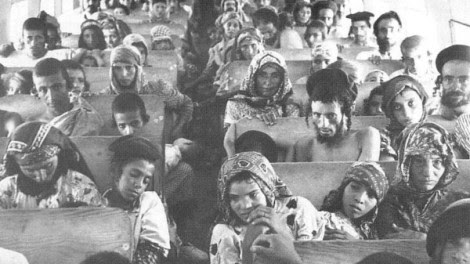 But Savren turns the Israeli government’s longstanding argument against itself: the Jews can’t be refugees because they were “coming home.” There are many flaws with this argument. First of all, 200,000 Jews from Arab countries did not go to Israel. Do Jews who are now French or Brazilian citizens feel any less “at home” in their new countries than Jews in Israel? Savren’s assumption is that Palestinian aspirations to “come home” remain unfulfilled.

The Palestinians could make Arab states “home” if there was a will. At the very least, a future Palestinian state in the West Bank and Gaza would be expected to welcome Palestinian refugees home and give them full civil rights, although pronouncements by the Palestinian ambassador to Lebanon do not bode well on this score. Objectively, Palestinian Arabs ought to be easily integrated in host countries where people speak the same language, share the same culture and religion, and where their children were born.

And now comes the kicker: Savren states that Jewish and Arab refugees are not alike because “Palestinian Arab society was ripped asunder” during Israel’s War of Independence.

So the Jewish communities of the Arab world — with their traditions, culture, cemeteries, and shrines; their synagogues, schools, and communal structure — were not ripped asunder, with families scattered to the four corners of the earth?

If anything, the current campaign demanding equivalence between the two sets of refugees does a disservice to the uprooted Jews.

We are talking about the massive ethnic cleansing of age-old communities. Apart from enduring dispossession, humiliation, arrest, torture and murder, the Jews lost their entire civilization, their Judeo-Arabic language and much of their culture. Their displacement was on a larger scale than the Palestinian one, and their material losses greater. Whereas Arab refugees fled a war situation of their own making, the Jews were victims of unpredictable violence and a deliberate policy scapegoating them for being Jews. The proof is in the pudding: A million Arabs live in Israel today, whereas only 4,000 Jews from a 1948 population of one million live in Arab countries.

So why is the US bill demanding equivalence for the two sets of refugees if it’s not fair to the Jews? The answer is that the Palestinian issue has held unchallenged sway on the agenda for so long that the Jews are forced to “play catch-up.”

But this is no reason for well-meaning but fundamentally ill-informed commentators to privilege Palestinian rights, while despising the rights of Jewish refugees and their Sephardi and Mizrahi descendants, who make up 50 percent of Israel’s population. There’s a word for that: racism.

I left some comments at the Times of Israel site. But I must say that these quibbles about Who Is Really a Refugee are stupid and indicate shallowness. As I see it, the main motive for refusing to see the Jewish refugees from Arab lands as refugees is a desire or compulsion to protect the Leftist narrative about Arabs and particularly those Arabs called "palestinians."

Bear in mind that the world Left, the reference group for the Jewish "leftists" too, has been whining over the Palstinian Arab refugees since about 1950 when the Soviets abandoned their previous support for Israel. Non-Soviet-oriented "leftists" were probably taking that position earlier. Think of all those people in Israel, like Shuli Aloni, Yossi Sarid, and a small army of autistim or artistim who wanted to feel themselves an integral part of the world "Left." Recall that Shenhav too takes that position. I remember a TV show about ten or 15 years ago here in Israel on which a Commie historian, apparently a son of Tamar Gozhansky [CP MK], was trying to tell people who had been on the famous Exodus refugee boat that they had been kidnapped by the Zionists and forced to stay on the British boat that took them first back to France and then to Hamburg. The old timers on the show said No, we weren't kidnapped or forced to stay on. But this Commie historian could not accept it.

Ironically or not so ironically, British spokesmen were saying back in 1947 that the Zionists were forcing the refugees to stay on the Brit prison boat instead of getting off in France [the French were saying that they would not accept anybody who had been forced to debark]. This means that communists recently have been parroting the line of the British imperialists in 1947.

I had addressed this question of camps on that other site but for some reason I can't see my post.

First, we should ask the question of why the Arab states were so eager to send massive Jewish populations to Israel, Iraq in particular.
It certainly wasn't in order to strengthen the Jewish State which would be too overwhelmed to defend itself, but rather to cause it to crash.
The new Israeli government realized the danger of uncontrolled immigration and it established quotas. The quotas for Jews from Arab countries were particularly stringent - no doubt for other reasons too. 2500 a month for the Jews of Iraq by 1950, 600 for the Moroccan and Tunisian Jews at the time of the riots of 1953 and 1955.
But after the riots, Jews wanted out and registered en masse, and so transit camps were established: in Iran for Iraqi Jews, and the camp d'Arrenas in Marseille for North African Jews, where in many cases the refugees spent years waiting for accommodation in Israel, while others were taken to Israel where there too, they spent years in Maabarot, while new towns were being built in the periphery along the southern borders:
Dimona 1953-1955, Sderot for Kurdish Jews in 1954, Netivot for Moroccan and Tunisian Jews in 1956, Ofakim for Indian and North Africans in 1955, etc.
So yes, Jewish refugees were also relegated from camp to camp.

Bataween a wealth of photographs in that site.

"I must say that these quibbles about Who Is Really a Refugee are stupid and indicate shallowness."

I thought at first that perhaps it wasn't a good idea to go to those other writers who clearly either didn't do their homework or were purposely provocative in order to generate more traffic.

But on second thought, it serves spread awareness of a history that the state's first historians sought to suppress, in their naive (leftist) view that building resentment could only hinder "peace", not to mention that they sought to build a unifying narrative, at the expense of others' history.

Let's hope some clueless New Yorker writes an article in the New York Times or the Washington Post that will require another rebuttal in those very newspapers ;)