Tunis cemetery is in desperate need of restoration 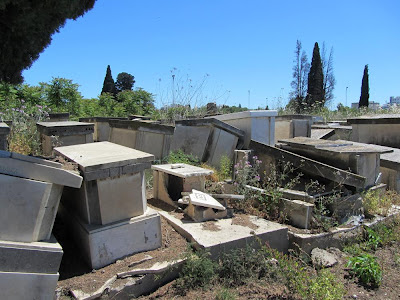 The president of the association for the preservation of the Borgel cemetery in Tunis has launched a last-ditch appeal through the Tunisian-Jewish website Harissa to save the cemetery, North Africa's largest: (With thanks: Michelle)

In June Point of No Return featured The Forward's video report on the deteriorating state of the Borgel Jewish cemetery, the largest in North Africa, which contains 30,000 Jewish graves. A small number were transferred from another Jewish cemetery in the centre of Tunis, including the tomb of the famous Rabbi Hai Taieb (Lo Met). This central cemetery was turned into a park shortly after Tunisia gained its independence in 1956, and the vast majority of tombs bulldozed into the ground.

Unless something is done urgently, fears lone campaigner Joseph Krief, the same fate awaits the Borgel. Once on the outskirts of Tunis, the cemetery is threatened by the encroaching city, and soaring land values make it ripe for redevelopment if it is declared 'abandoned'. Krief has been leading a drive to raise funds to clean up and restore the cemetery, so far without success. If nothing is done soon, another slice of Tunisian-Jewish history will be lost for ever.

If you would like to help the cemetery restoration drive please contact Marc Fellous (marc.fellous@inserm.fr)
Read post in full (French)
Posted by bataween at Tuesday, July 31, 2012