Something light for Tisha b'Ab 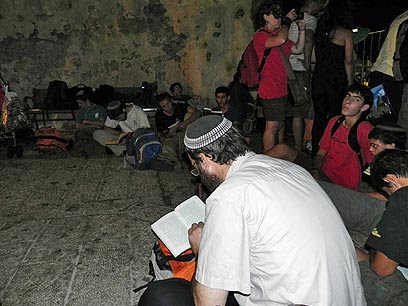 The fast of Tisha b'Ab (9th Av), which technically falls tomorrow but actually is marked on Sunday because mourning is forbidden on the Sabbath, is the darkest day of the Jewish calendar. It is a day of mourning commemorating the destruction of the First and Second Temples in Jerusalem, and other misfortunes that have befallen the Jewish people.

It is customary for mourners to read the Book of Lamentations. Among Jews of Aleppo the portion of the law read on Shabbat Ekha, just before the Fast, is sung to Maqam Hijaz. "There is consensus among ALL sources to apply Hijaz; this maqam (octave scale) is reserved to express sadness", says the blog Pizmonim Project.

On a lighter note, here is what our regular commenter Suzy Vidal, in her memoirs The Jasmine Necklace, has to say about 9th Av, and its significance for the Jews of Egypt:

" My mother was born on July 23, which happened to be 9 Av, the destruction of Solomon's Temple and also the date of the Expulsion of Jews from Spain. Everyone called it Yom Ekha. Anyone who knows his Jewish calendar could easily guess which year Yom Ekha happened to be on July 23. But people were not te-ill el dam, heavy-blooded, and were not going to complicate their lives or waste time with such futilities.

"Yom Ekha is a very bad day in our calendar. It is not the day to sign an important contract, getting engaged or married. Sexual relations are forbidden. You cannot go the swimming pool or have a swim in the sea; you just sit around, pray and wait for Yom Ekha to pass away.

"Several expressions are attached to that day. It is an expression of disbelief. If someone says," I'll do this or that," you can answer "Oh yes, Yom Ekha". It is the same as saying we'll never see that. Of someone who is not resourceful you could say Ekha aleh or Ekha aleha. Aleh means on him and aleha on her.

"My mother was convinced that being born on Yom Ekha she was bound to be unlucky: fall off her beloved ladder, burn her hand with boiling oil or have money stolen from her bag when shopping. All the misfortunes that happened to her were because she was born on July 23, which in the year of her birth happened to be Yom Ekha."