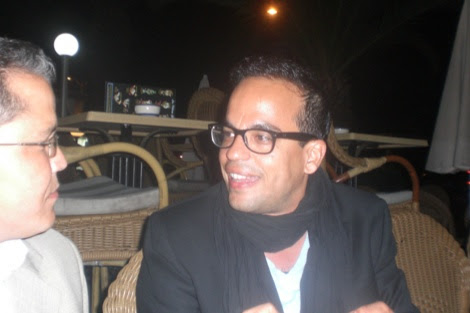 What is the attitude of the ruling Moroccan Islamists to Jews? On the one hand they have berated a Berber Muslim film-maker for his sympathetic portrait of Berber Jews now in Israel. On the other hand, they invited an anti-Zionist Israeli to their convention - although his mere presence there sparked local rage.

A Moroccan Berber film-maker has been accused by the ruling Islamist party of treason, Zionism and wishing to 'normalise' relations with Israel.

The Catholic newspaper La Croix reports that the minister of communications asked for an explanation after a TV screening of Kamal Hachkar's film Tinghir-Jerusalem. His is the first film to deal with the exodus of Berber Jews from his home town of Tinghir to Israel, which he visited.(Reviewed here - unfortunately the video and trailer are no longer available).

"It's pure antisemitism," retorted Hachkar." There is nothing in this film making it an apologia for the state of Israel. It tells historical facts which most Moroccan youth are not aware of...With the 'Arab Spring', we are seeing an obscurantist political Islamism emerge. This intolerant Islam is not mine, it is not our grandparents' either, who lived in Tinghir. Today, an ideological battle is being waged."

Meanwhile, back at the Islamist ranch:

An Israeli peace activist and former assistant to Israeli Prime Minister Yitzhak Rabin was a guest at an Islamist party convention in Morocco, where he met Hamas leader Khaled Mashaal, according to Noam Nir, an Israeli who lives in Essaouira, Morocco.

Nir reports on his blog, The King and I, that Ofer Bronstein was rejected by Jewish organizations in France but was invited as a guest by the ruling Islamist party in Morocco, where he met with Hamas political leader Khaled Mishaal. Bronstein's presence sparked local rage and officials threaten to resign their posts. The organisers explained: Bronstein is French and "a good friend of the Palestinian people."

In addition to his French passport Bronstein carries a Palestinian passport.

Blogpost on Hachkar by Noam Nir
Posted by bataween at Monday, July 23, 2012