With thanks: Michelle and Sylvia 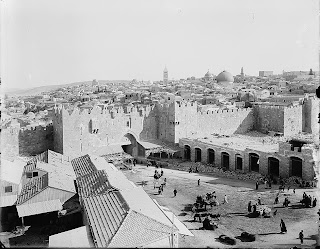 Shops owned by the Jewish Valero family outside Damascus Gate in Jerusalem, until they were demolished by the British in the 1930s. Arab propaganda seeks to erase the memory of a Jewish presence in 'Arab' East Jerusalem.


So 'Jewish refugees from Arab countries ' have got the Jordanians rattled. How else can this article from Addastour, unearthed by Elder of Ziyon, be construed ? The raising of the issue of Jewish refugees and a US bill to force the government to narrow the definition of Palestinian refugees are almost too much to bear - an onslaught on two sacred cows: the 'right of return' and UNWRA's bloated budget. Note the words 'so-called' and 'fabrication' in the same sentence.
The article quotes Jordan's Director General of the Department of Palestinian Affairs, Eng. Mahmoud Aqrabawi.

"He noted that the Jordanian delegation to the meetings, raising the issue of Israeli attempts continued to harm the Palestinian refugee issue in international forums and fabrication of the so-called Jewish refugees in Arab countries (my emphasis) and to impose on the agendas of international as well as pressure from Israel to some members of the U.S. Congress to reconsider the financial support provided to UNRWA so that aid is limited to the first generation of refugees, thus reducing the annual U.S. aid to UNRWA to a minimum; what makes the continuation of the Agency in its tasks and work extremely hard."

Coincidentally, I had that conversation with a BDS activist yesterday. She/he was furious when I said that the "solution to the Jewish refugees must be linked and conditional to the solution for the Palestinian refugees."

Keep up the good work.

PS: The Jordanians have known about it. In fact the Iraqis's initial plan was to transfer the Jews through Jordan. It would be useful to repost that. I think it was in a conversation with our friend "iraqi anonymous" where I had posted some information to that effect from Martin Gilbert's book.

The Jewish Valero Family Owned the Land outside of Damascus Gate. Antique Photos Show What Happened to It