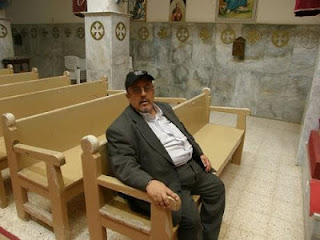 Update: Raphael Luzon has issued the following message to his Facebook friends:

I WOULD LIKE TO THANK A LOT OF LIBYAN FRIENDS THAT IN LIBYA SUPPORTED ME DURING MY ARREST AND CAME TO VISIT ME EVERY NIGHT AND PHONE ME EVERY HOUR AND BROUGHT ME FOOD, MEDICINES AND CLEAN CLOTHES. SHUKRAN JAZILAN UA BARAK ALLAH FIKUM.

ALSO THANKS TO ALL LIBYANS (JEWS, MUSLIMS AND CHRISTIANS) THAT SYMPATHIZE AND SUPPORT ME FROM ABROAD.

TO ALL OTHER LIBYANS THAT INSULT, CURSE AND THREATEN ME...CARRY ON DRINKING THE SEA OF BENGHAZI !!!


Raphael Luzon, a former Libyan Jew, returned to the UK safely on Sunday after security forces in Benghazi imprisoned and interrogated him for several days. "I don't advise any Jew to go to Libya, he told the Jerusalem Post. (With thanks: Jeremy)
Luzon said his ordeal began in Benghazi on July 22 when “suddenly a friend sent me a text warning me to be careful that security forces are looking for me,” he recalled. “I immediately called the Italian consul who came to my hotel, but when I went to the lobby to meet him he was surrounded by 12 to 15 armed men.

They didn’t let the consul speak, they put me in the car and took me outside Benghazi.”

Luzon, who said he was in the country for business, was kept behind bars at a military camp outside the Mediterranean city without being told why.

“I felt my life was in danger for the first 24 hours because no one knew where I was or what had happened to me,” Luzon said. “In the morning high officials came. One of them, a general shouted at my captors saying they should have brought me food and water.”

The Libyan Jew said men he identified as belonging to the muchabarat, or the preventive security, interrogated him daily.

Meanwhile, news that a “Jewish leader was abducted” appeared in the Libyan press.

After four days in prison, Luzon was freed and kept under house arrest at a friend’s residence in Benghazi.

Still, he was not allowed to leave the country. A citizen of Britain and Italy, Luzon said both countries intervened on his behalf. He credited British MP Robert Halfon, whose father was a Libyan Jew, and Italian consul Guido Bessanti, for securing his release.

Asked why he had been arrested, Luzon said he was still not sure.

“I don’t know why, but privately I’ve been told that there is a big fight between the groups and everybody wanted to be the one that arrested and released me,” he said.

Luzon and other members of the former Jewish community of Libya, who were forced to leave the country in the 1960s and 1970s, have for years been lobbying for the return of considerable private and communal Jewish assets that were confiscated by the regime of slain dictator Muammar Gaddafi. After Gaddafi’s fall in 2011, there was hope the country might open up and address the grievances of its exiled Jews, but so far little progress has been made.

Last year David Gerbi, another Libyan-born Jew, received death threats after he tried to reconsecrate a synagogue in Tripoli, forcing him to flee the country.

Luzon, who makes a point of distancing himself from Gerbi, has been negotiating with Libyan officials over the rights of Jews to little avail.

Elio Raccah, a member of the Jewish Libyan community in exile based in Italy, the country’s former colonial ruler, said he had few expectations that he would be welcome back to Libya in the near future.

“What really counts is popular sentiment, I am convinced nothing has really changed over there as far as the Jews are concerned,” he wrote in an email to the Post. “[The Libyans believe Jews are] undesired greedy ogres to be ridden of in Palestine and, of course, in Libya.”

The question of Jewish rights remains mute in Libya, where a multitude of rival groups and clans are fighting for power in the power vacuum created by Gaddafi’s ousting. Last month, when elections were held for the first time, the National Forces Alliance, a non-Islamist, liberal party, emerged triumphant, bucking the Islamist trend in Arab Spring countries like Tunisia and Egypt. It remains to be seen, however, whether Western-educated Mahmoud Jibril who leads the party will be able to reestablish the rule of law in the oil-rich nation.

Despite his recent experience, Luzon said he had not given up fighting for the rights of Libyan Jews.

“It will take a long, long time if they will allow some Jewish assets to be returned,” he said, “but I think the country would allow Jews to return for holiday or business in a few years.”

“They were under a regime for decades and they do not distinguish between a Jew and a Jewish Zionist, religious or secular,” Luzon added.

Meanwhile, he added, “at the moment I do not advise any Jew to go to Libya.”

My harrowing Yom Kippur and escape from Libya, by David Gerbi
Posted by bataween at Tuesday, July 31, 2012

The so-called "liberal" party in Libya is really not so liberal. It won against the outright Islamists --and that is a good thing-- because its leaders appealed to the tribal loyalties of Libyans, not so much because of any secular-liberal platform.

But the last time I read Bernard-Henri Levy in the French press, he was still taking pride in helping to bring liberty to Libya.