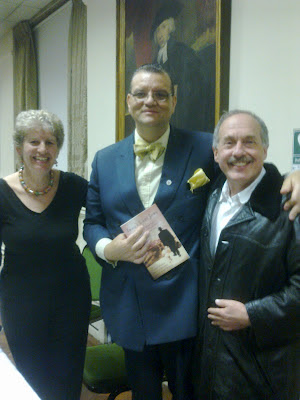 Left to right: Lyn Julius of Harif, Canon Andrew White and Dori Schmetterling, a member of the Board of Deputies of British Jews (Photo: Edwin Shuker)

The shrine of Ezekiel at al-Kifl in Iraq and its adjoining synagogue are safe and its Hebrew inscriptions untouched, says Canon Andrew White, dismissing fears that the shrine is to be turned into a mosque. He told a packed house at the Sephardi Centre in London on 6 June that the imam responsible for the shrine of Ezekiel in Iraq would like to preserve it as a place of worship for all three faiths - Jewish, Christian and Muslim. Lyn Julius of Harif has written this report of a remarkable evening:

Renovation works have begun. Canon White, who visited the shrine in 2010 accompanied by 30 bodyguards, was satisfied that the works will not alter its character, although he had reservations about plans to build offices in the courtyard, which he called 'naff.'

Canon White and the local imam have agreed to bring in a Torah scroll for use in the synagogue.

There is no shortage of Torah scrolls in Iraq: the basement of the national museum in Baghdad has 365 scrolls. On his visit there, the Canon, who looks after the interests of the seven Jews left in Iraq, was shocked to find rats gnawing at the scrolls. He managed to get the scrolls raised off the ground, but then ran into resistance from the museum to releasing one of the scrolls: they were needed for study, came the reply. Canon White retorted that the museum only needed one scroll for study since they all shared the same content.

Canon White had also visited the tomb of the prophet Nahum at al-Qush near Nineveh. He came across a charming synagogue with a geniza (store of documents bearing the name of God). Both were in the care of the local Assyrian Christian population.

"Don't take care, take risks," is the watchword of the Canon, who has lost 273 members of his own Christian community to bombings and assassinations and had many narrow escapes himself. Targeting of the Christians stopped when White negotiated for the imams to declare a fatwa, funded by the Danish government.

Living for five-week stints in Baghdad away from his wife and two sons in the most 'dangerous place in the world', this larger-than-life Christian cleric, dubbed the 'vicar of Baghdad' and sporting kippa, bowtie and worry beads, has to contend with Multiple Sclerosis, for which he receives state-of-the-art stem-cell treatment at his own clinic in Baghdad. It may have affected his speech and his gait, but he is more determined than ever to carry on serving the only Anglican community in Iraq, which dates back to the time of the British mandate. The writer Gertrude Bell is buried in the church cemetery, although she was not a believer.

The Canon treats the seven Jews as an extension of his own 4,000-strong congregation at the Anglican church of St George. All but two Jews, a dentist and an orthopaedic surgeon, are elderly ladies. The mezuzot on the doorposts of Baghdad's houses attest to the once prosperous community of 150, 000 Jews - civil servants, doctors, lawyers - the backbone of the Iraqi economy.

Some of the older generation have positive memories of the Jewish community but the younger people are ignorant and prejudiced. Canon White was dismayed at the drip-drip effect of Arab propaganda branding Jews as killers of Arabs. He has set himself the task of correcting misconceptions among the pupils in his church school by teaching them about Judaism and the Holocaust. The few Jews could immigrate to Israel, but have been conditioned against doing so. Last year, a US soldier exposed the Jews to further risk when he passed stolen information from the US embassy to Wikileaks, including the names and addresses of the remaining Jews.

White's sympathy for Jews goes back to his childhood, when he used to confront hoodlums wrecking the Jewish cemetery backing on to his London home.

The Canon's judeophilia is shared by ex-Archbishop of Canterbury Lord Carey, who initiated the Alexandria Process to further Middle East peace, but apparently not by a sizeable segment of the established church in the West. The latter's leaders are often pusillanimous in their condemnation of the persecution of Middle Eastern Christians and even sympathetic to their persecutors. Meanwhile, the Assyrian Christian population in Iraq has declined from a million-and-a-half to 200,000.

Studying to be ordained as a priest at Cambridge, White was taught Jewish studies by Professor Nicholas de Lange, but found De Lange's reform brand of Judaism insufficiently rigorous. It was only as the 'only goy' at a yeshiva in Mea Shearim, Jerusalem, that Andrew White saw how religious Jews lived Judaism. He knows more about their religion than many Jews and has been known to chide the current (Jewish) US ambassador to Baghdad for his ignorance.

Asked how he reconciled being a Christian with his affinity for Judaism, he admitted: "I suppose I'm hedging my bets. When the Messiah comes, I can ask him if he's coming for the first or second time!"

Jews are lucky to have such a remarkable and brave man to safeguard their interests.

Vicar's plea to save Torah scrolls of Iraq's last Jews (Jewish Chronicle)
NB contrary to what is stated in the article, the vicar did not actually plead for international assistance to save the Torah scrolls. He just wanted one scroll, not for one of Baghdad's non-functioning synagogues, but for the synagogue attached to Ezekiel's tomb. The scrolls are in the national museum, not a 'church' museum.

I'll link to this tomorrow.