What future for the Jews of Tunisia? (updated)

The pilgrims sing the Tunisian national anthem. Most were local Jews living on Djerba, joined by 500 Jewish tourists from Europe. There were none from Israel. (With thanks: Ahoovah) 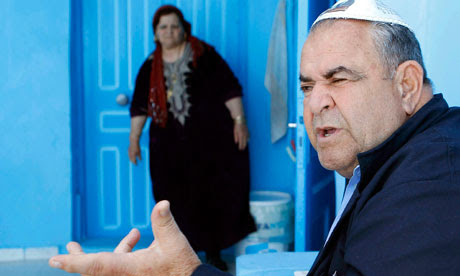 The annual Lag La'Omer pilgrimage or Hiloula to the Al-Ghriba synagogue passed off without incident today, with some 500 Jews from Europe joining 1,000 local Jews on the island of Djerba. Kouichi Shirayanagi has this refreshingly balanced analysis in the Guardian's Comment is Free website. The main threat is not just coming from the extremists Salafist Islamists, but from the 'mainstream' militants of the Ennahda party, whose hollow condemnation of anti-Jewish incitement does not make Tunisia a more tolerant society. (With thanks: David; Adam)

Since the Tunisian revolution, a question on the minds of many outside observers has been: what impact will the changes in the country have on religious minority communities? The question is especially important because Tunisia is now widely perceived as a model for other countries undergoing transformations as a result of the Arab spring.

Tunisia is home to one of the oldest diaspora Jewish communities, whose history dates back more than 2,000 years. Tunisian Jews have a wealth of customs and traditions developed over the long period of time they have lived in the country – some that have been lost or never practised by other Jewish communities around the world.

Before independence from France in 1956, Tunisia's Jewish community numbered more than 100,000. Today it is less than 2% of that, though the island of Djerba has a young Jewish population which has grown in recent years.

This week, on Wednesday and Thursday, Tunisian Jews will make their annual pilgrimage to El Ghriba synagogue on Djerba, commemorating the death of Shimon Bar Yohai, a second-century kabbalistic rabbi who authored a famous religious text known as The Zohar. Before the revolution, this event – known as the Hiloula – attracted almost 10,000 foreign visitors each year and became a barometer of expectations for the coming tourist season. The pilgrimage was cancelled last year in the immediate aftermath of the revolution.

The current Tunisian government, elected last October, has made promotion of the event a critical priority for reviving tourism in the southern part of the country. At the recent International Congress of World Tourism, the Ennahda party leader and prime minister, Hamadi Jebali, declared: "Tunisia is an open and tolerant society, we will be proud to have Jewish pilgrims visit El Ghriba as they have in the past."

President Moncef Marzouki visited El Ghriba synagogue at Passover – which this year also marked the tenth anniversary of an al-Qaida-related attack that killed 21 European tourists. Wearing a traditional Tunisian hat known as a kabbus, often used by Jewish men in Tunisia as a religious head covering, Marzouki emphasised that Tunisian Jews are an integral part of Tunisian society and "any vandalism or violence against the Tunisian Jewish people, their property or their holy sites is totally unacceptable".

While the symbolism of his visit was exceptional, missing from the president's appearance was any significant representative from the Islamist Ennahda party, which won the largest share of seats in last year's election and is often regarded as the real power in Tunisia.

Ennahda has given mixed signals to Tunisian Jews. While some in the party leadership, such as its intellectual leader Rached Ghannouchi, have repeatedly pledged to protect the Jewish community, others among the party's supporters are hostile – as are the troublesome salafists.

In January, Ennahda organised the visit of Gaza-based Hamas leader Ismail Haniyeh. When he arrived at Tunis-Carthage airport, a group of salafists within the crowd shouted: "Kill the Jews! It's our religious duty!" as an official party waited to greet him. A statement issued later said: "Ennahda condemns these slogans, which contradict the spirit of Islam, and considers that they were uttered by a fringe group aiming to undermine Ennahda's activities and tarnish its image."

Last week, Basma Jebali, an Ennahda member representing a constituency that includes the island of Djerba stated in parliamentary discussions that "massive purchases of land by Jews in Djerba could turn the island into a second Palestine". She appeared to have forgotten that adherents of the Jewish faith were living in Djerba long before the arrival of Islam.

According to Tunisian Jews I spoke to who regularly attend the Hiloula, many have already cancelled plans for this year. Others who are attending say they will avoid travelling in large groups.

Roger Bismuth, the president of the Tunisian Jewish community, has recently been campaigning against what he says is becoming almost a regular occurrence – of radical Islamist groups publicly calling for the killing of Jews. "I will be attending the Hiloula this year, mainly because President Marzouki and many ministers in the Tunisian government are scheduled to attend," he told me. "However, it is so difficult to organise a large event given the circumstances."

While the number of pilgrims who will attend is still unclear, if the event succeeds in bringing more than a few thousand, the Ennahda-led Tunisian government will surely hail it as evidence that Tunisia is a tolerant country for its minorities and is fully open once again for foreign tourists.

However, the situation is not quite so simple. No doubt the Hiloula will be well-protected by the Tunisian government's ardent security measures. But providing strong security for the one event does not make the new Tunisia of today a tolerant society.

Jews stay away from Tunisia festuival (Reuters)
Posted by bataween at Wednesday, May 09, 2012