At Shavuot, which Jews celebrate beginning Saturday night, it was customary for Jews in Iraq to go on a pilgrimage to the tomb of Ezekiel. But now that almost no Jews live in Iraq, it is feared that the shrine, which is holy to Muslims as well, will be turned into a mosque. Not so, says Sheila Raviv: she has received assurances from Sheikh Gahalivi, via Canon Andrew White, the so-called 'vicar of Baghdad'. In 2010, Canon White went personally to investigate the state of the shrine. This post in the Times of Israel is from 5 March, but hopefully, nothing much has changed since.

I met Canon White when he was the emissary of the former Archbishop of Canterbury Lord Carey, here in Jerusalem. I was drawn to this larger-than-life, deeply religious man who also had great respect and understanding of Judaism, having spent a year in yeshiva during his theological studies in Cambridge University. Canon White’s current posting in Iraq is conceivably the toughest in the world, having seen the beginning and end of the Allied invasion of that country and also having lived through the reign and fall of Saddam Hussein. Having no fear of his delicate medical situation or the fact that he has a $30 million Fatwah on his head, Canon White walks with his head held high and cares for all who need him.

On Jerusalem Day 2010 Canon White visited Ezekiels Tomb, making the perilous three-hour journey with 30 bodyguards and numerous vehicles because I had asked him to do so, as a friend and as a Christian, to see if the rumors that local sheikhs had destroyed all reference to Judaism in the Tomb were actual. His call came as I sat in a huge traffic jam outside Mount Herzl. The Canon excitedly described the Tomb, telling me it was incredibly beautiful although in desperate need of renovation. The ancient Hebrew segments were in poor condition, but intact. He also told me that he had meetings with the local El Kifl sheikhs who wanted to retain all aspects of the Tomb and refurbish it. 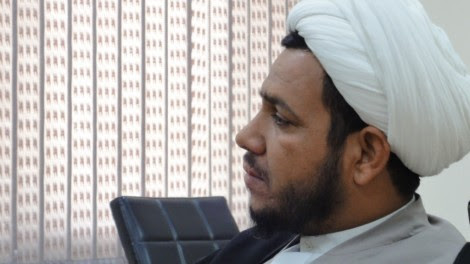 Over the next period of time Canon White requested that I send him photographs of the original texts of the Tomb in Hebrew so that the artisans could copy them anew.

Last week Canon White called me from Iraq to tell me that Sheikh Al Gahalivi wanted to speak to me through an interpreter to thank me for setting the renovations in motion and for introducing him to Canon White.

Here’s what the Sheikh said:

I was praying for many years that someone would care about the Tomb. I wanted to preserve the Tomb for us all and prayed that I would find someone to communicate with out there in the world, and you sent Canon White to me and the work began in earnest. I want you to know that the Jewish shrine is safe with us, Ezekiel is important to us too. I want to build a visitors center around the Tomb to protect it and to make it ready for when Jews, Christians and Muslims can all visit the Tomb together. I just wanted to thank you for caring and being prepared to act. Shukran and Salaam

Through the interpreter, and Canon White, I thanked the Sheikh for his care and determination to retain the Jewish identity of this important shrine in a world that might cause him harm.

One should never assume that rumours of our “enemies” working to deny Jewish sites are automatically correct. One should always be open to the possibility that sometimes there are good folk of all religions who are trying to make this world a better place.

Canon Andrew White will talk about Iraq's last Jews at the Sephardi Centre in London on 6 June. Details: Harif

Why? so he can charge admission to tourists or will he simply declare it a mosque 'rescued from the infidels'?

Sometimes I look at these mozlems and wonder, in this case, is he descended from Jews who were forcibly converted to islam?? He has an unusually thoughtful mien.