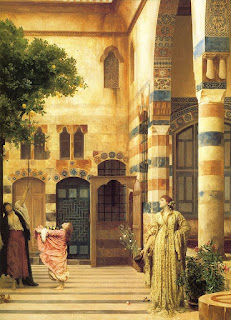 I hope it's not wishful thinking, but do I get the feeling that talk of the Jewish 'nakba' is beginning to enter the mainstream media? Established and influential journalists like Jeffrey Goldberg are beginning to challenge the Palestinian 'narrative' by referring to the 850,000 Jews made refugees from the Arab world.

Jeffrey Goldberg blogs in The Atlantic:

Speaking of nakbas, here is a report about another, more silent nabka, one that caused the movement of 850,000 people across the Middle East, but one that doesn't get that much attention, in part because these refugees were cared for by their brethren. Matti Friedman writes about a different nakba, a Jewish nakba.

On November 30, 1947, a day after the United Nations voted to partition Palestine into two states, one for Arabs and one for Jews, Aleppo erupted. Mobs stalked Jewish neighborhoods, looting houses and burning synagogues; one man I interviewed remembered fleeing his home, a barefoot nine-year-old, moments before it was set on fire. Abetted by the government, the rioters burned 50 Jewish shops, five schools, 18 synagogues and an unknown number of homes. The next day the Jewish community's wealthiest families fled, and in the following months the rest began sneaking out in small groups, most of them headed to the new state of Israel. They forfeited their property, and faced imprisonment or torture if they were caught. Some disappeared en route. But the risk seemed worthwhile: in Damascus, the capital, rioters killed 13 Jews, including eight children, in August 1948, and there were similar events in other Arab cities.

Here is Leo Rennert's critique in the American Thinker of Isabel Kershner's piece on the Palestinian Nakba in the New York Times:

Kershner's rewrite of actual history fails to take note that there were two "naqbas" in 1948 -- not just a Palestinian one.

Starting with the 1947 UN partition plan and then Israel's birth in May, 1948, about 850,000 Jews who had roots in Arab lands dating back a couple of thousand years were summarily persecuted, deprived of all legal rights, stripped of their property and forced to flee from Iraq, Syria, Egypt, Algeria, Tunisia, Morocco and other parts of the Arab world. Their synagogues were torched and many were lynched by bloodthirsty Arab neighbors. The number of Jewish refugees from Arab lands was greater than the number of Palestinian refugees.


A fair reading of history demands that equal attention be paid to this Jewish "naqba." But fairness is in short supply in the New York Times. There's also no indication in Kershner's piece about the different outcomes of these two "naqbas." The Arab world kept displaced Arab residents from Israel as refugees to use them as pawns in their pursuit of Israel's demise to this very day. In contrast, most of the hundreds of thousands of Jews who managed to flee from Arab lands ended up in Israel where they were integrated into the state's economic, political and social life. Such integration remains out of the question on the Arab side of the ledger.

But all this real history is censored by the Times' uncritical acceptance of an invented Palestinian narrative designed to block any realistic chance of a peace agreement. Kershner's article is a double affront to actual history. And in a most fundamental way, it disserves Palestinians by keeping them locked in a phony, mythical history that thwarts their national aspirations.
Read article in full

The meaning of Nakba Day (Commentary blog)
Posted by bataween at Wednesday, May 16, 2012

Rennert & Friedman accept the term "palestinian" for these Arabs, thus accepting what one of them calls an "invented" Arab narrative. Further, neither points to the country's legal status as the Jewish National Home by international law.

One assumes then, that the precise purpose of this so-called Jewish 'nakba' is to challenge the Arab 'nakba' narrative. There was no Jewish 'nakba' in my opinion and I think its immoral and offensive to make the equivalence simply because gathering up so many Jews from Arab lands was a great page in the history of Zionism, indeed of the Jewish people, and it should not be fittered away on cheap pointscoring.

We have already had an exhaustive discussion about the use of the term Nakba on the blog:

"Some object to borrowing from the language of our enemies, especially since the Palestinian Nakba really refers not so much to the catastrophic flight of Palestinian Arabs, but to their catastrophic failure to commit genocide on the Jews.

"But the expression seems to have caught on. On Youtube there are several publicity videos using the term Jewish Nakba. The ex-Justice minister of Canada and human rights lawyer Irwin Cotler and Israel's deputy foreign minister Danny Ayalon have used it. Leading Israeli columnist Ben Dror Yemini employed the term. So did Lela Gilbert in The Jerusalem Post, Charlie Wolf in Jewish News and Lyn Julius, writing on The Guardian website. And Ada Aharoni used the expression quite liberally herself, until she encountered fierce resistance from some quarters in Israel.

"The expression Jewish Nakba does seem to make people sit up and listen simply because it has provocative associations with the Arab Nakba. One pro-Israel activist of Muslim background gave Naqba (or Nakba) his seal of approval:

"From a non Jewish point of view, the name ‘Jewish Naqba’ instantly sparked my interest. I know that a lot of people just don’t know what happened to the Jewish communities all over the Middle East, this would be a great idea, in using the name it will raise eyebrows and cause people to look in to it, it’s something quite specific and not just some sort of generic name. That’s just my opinion."

One man's opinion, but worth taking seriously. "