Iraq's Jewish treasures could be lost for ever 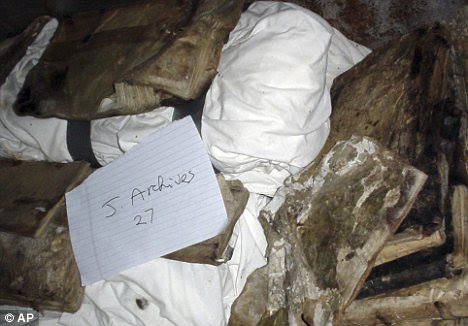 Iraq wants the Jewish archive returned: it is being restored in Washington after being found soaking in the Secret Police basement in Baghdad


With thanks: Qumran Qumran; Janet

Shavuot (Pentecost) was traditionally the festival when the Jews of Iraq performed 'ziyara' - the pilgrimage to the tomb of Ezekiel at al-Kifl. Writing in the Hebrew medium G-Planet Guy Bechor has performed his own 'ziyara', revisiting the parlous state of Iraq's Jewish heritage. He is not hopeful: Iraq's Jewish treasures could be lost for ever. Here is a rough summary in English of Bechor's important piece.

Saddam Hussein, the dictator of Baghdad built himself a private museum of Jewish books and artefacts. The lost Jewish community continued to haunt him like a ghost.

The first news of the Jewish archive came from the head of the Israel-Palestine department of the secret police. After the US invasion of 2003, he told US officials - among them Harold Rhode - a scholar fluent in both Hebrew and Arabic - that he knew where a very rare Talmud from the 7th c. was kept. The screams of the tortured could be heard all around from the adjoining room in the Mukhabarat dungeons. The Americans dropped a half-ton bomb on the building. It did not explode, but water and sewage filled the basement, soaking a vast collection of Jewish holy books published in Leghorn, Jerusalem, Smyrna, Vilna, Warsaw, Baghdad, Torah scrolls and parchment, the oldest from 1568 - books used by the great rabbis of Babylon.

The most interesting archives, however, were from the 20th century, up to to 1953, and include a list of Jewish-owned properties, academic registers, school reports to the Ministry of Education, the chronicles of an ethnically-cleansed community which had shaped Judaism itself. The collection was looted from synagogues in 1950 and especially the attic of the Meir Shemtob synagogue in central Baghdad.

Jewish organisations had hope that the discovery of the Jewish archives would had led to the restoration of cemeteries and heritage, but everything is dissolving in Iraq today. The window for foreigners to visit has closed, and the shrines of Ezekiel at al-Kifl and Ezra the Scribe near Basra have been turned into mosques. Nobody cares.

As most Jewish archives would have been buried, Guy Bechor felt there was an opportunity to discover the very roots of Judaism, but when he broached the subject with (Prime Minister) Ariel Sharon, Sharon was not interested. The Israeli government was always fire-fighting and lost Jewish treasures in the Arab world were the very lowest of its priorities.

What an impertinence when the collection was looted from its rightful owners. Guy Bechor suggests that the collection should go to the heirs of the Iraqi-Jewish community in Israel, or at least be accessible to them.

Tug-of-war over the Jewish archives
Posted by bataween at Monday, May 28, 2012