How her Egyptian uprooting liberated my mother

The uprooting of Jewish women from Egypt, for some, was a liberation. In her new book The Arrogant Years and in this piece for the Wall St Journal, Lucette Lagnado describes how her mother only fulfilled her true potential on arrival in the US - and not from choice. But the other side of the coin, as Lucette shows in her brilliant book, The man in the white sharkskin suit, is that the experience of displacement broke the fathers, and often sentenced them to a premature death. (With thanks: Lily)

Small, shy, seemingly passive, she was for decades a "stay-at-home Mom," that now-searing term used to describe what women have done for generations: look after a husband and children and a household. Unlike most American women, though—including those who figured in the recent contretemps between Democrats and Republicans over the choices Ann Romney made—my immigrant mother never had a choice.

Not a hint of one.

For a young girl coming of age in Cairo of the 1930s and '40s, whether you were Muslim, Jewish or Christian, rich or poor, society didn't allow any options. Marriage was the only possible goal. It was what a friend of mine, an elderly Egyptian woman, calls the "yallah phenomenon." Yallah is an Arabic expression used to mean, "hurry up, come on, what are you waiting for?" A young single woman in Egypt could expect to be constantly harangued by her parents saying, "Yallah, get married already."

In my mother's case, she escaped for a time the tyranny of yallah. Her own mother, my grandmother, allowed her to stay in school till she was 15—a feat in those days and in that culture—and there she earned a diploma issued from Paris. That brownish piece of paper, known as a brevet, enabled her to be a career woman. She was licensed to work as a schoolteacher and got a job almost immediately at a prestigious Jewish private school.

It was a heady period. Friends from that time still recall how proudly my mother walked to her job every day, dressed in a fitted skirt and blouse and carrying a briefcase. She was such a standout that she became the protégé of the wife of a pasha, one of the loftiest titles in the land.

Madame Alice Cattaui Pasha, one of the most powerful women in Egypt, chief lady-in-waiting to the queen, was also the school's benefactress. An elegant, distinguished woman, she devoted herself to various do-good causes, including volunteering at Jewish communal institutions. A substantial number of Cairo's Jews were poor and lived in decrepit conditions in the old Jewish ghetto. Wealthy Jewish individuals led by Youssef Cattaui Pasha and his wife Alice took the place of a welfare system. 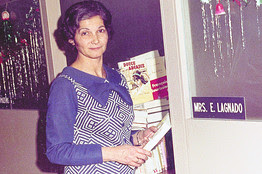 Edith Lagnado at the Brooklyn Public Library, circa 1970 (Courtesy of Ed and Maureen Kozdrajski)

My pretty, diligent mother caught the eye of the pasha's wife and an unforgettable friendship began—unforgettable at least from my mother's standpoint. Under the aegis of Madame Cattaui Pasha, as Mom always called her, my mother broadened her responsibilities to include acquiring books so the school would have a library and then added the role of school librarian alongside her teaching duties. It was a blissful time, as my mother told it, when her whole life was lived among books.

Then it was over. In 1943, Mom became engaged to my father, a man some 22 years her senior, and was expected to stop working. Immediately. It wasn't possible for a married woman to have a job. That would mean that her husband couldn't support her. Edith threw herself into her new role. She had her first child, my older sister Suzette, barely a year after the wedding, then four more children. One baby, a girl, died in infancy, then I came along.

In those intervening years a king fell and a group of military officers led by Gamal Abdel Nasser rose to power. Suddenly life in Egypt was over for the country's 80,000 Jews. They left for anywhere that would take them—Israel, England, France, Italy, Spain, Brazil, Australia, Canada and, in our case, Brooklyn, N.Y.

Yet the American dream seemed elusive for my family. Back in Cairo, at least my Mom had a maid. Here she was forced to do all the housework herself, and tend to me, my siblings and my now-debilitated father, who was in his 60s. Dad, who had been a businessman, went to work selling ties on the subways, struggling with a heavy limp. At 18, my brother took a job to support the family. It was barely enough, and one month we missed paying the rent.

Mom began to voice a very American desire. Like other women in our New World, she wanted to get a job. It seemed so preposterous. She didn't know the language and didn't have any skills—though she proudly unrolled the aging brown diploma, the brevet, that she had carefully carted from Egypt to New York.

Dad didn't take her seriously; none of us did. But it was the '60s, and even women from my small, sheltered community were breaking out, emulating other American women. Mom's dearest friend, an immigrant from Morocco, got a job in one of the small factories that lined 20th Avenue in Bensonhurst, sewing children's clothes. Mom had never learned to sew, so that wasn't an option.

Then she had an idea. She sent a letter to Grolier, a famous educational publisher, asking for employment in her impeccable schoolteacher's handwriting. She was offered a meeting, but when the day came she had a quandary: What to do with me? She had never left me with a babysitter—not once. And so, off we went, hand-in-hand, to Mom's first American job interview.

I can still remember the look of the Grolier staffer when she spotted me. She told Mom she hoped I would behave. I sat there in my chair as they talked, too frightened to breathe.

Some days later, to all our amazement, an offer was made. I don't remember the exact salary amount, only that it seemed munificent. My father still balked—whoever thought of a woman working? After much agonizing, my mother turned down the job.

It took a few more years for Mom's personal liberation. In 1969, when I started high school, revolution was in the air. I had a scholarship to a private girl's school in the Prospect Park area. Without breathing a word to any of us, Mom went out one morning and applied for a job at Grand Army Plaza, the Brooklyn Public Library's flagship branch. Her only credential was her brevet from 1930s Egypt.