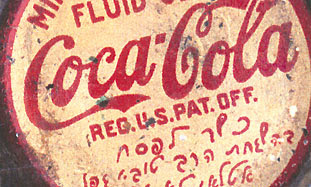 In the latest round of a protracted struggle, Raphael Bigio, an Egyptian Jewish businessman who alleges Coca-Cola Egypt is refusing to compensate him for use of his family’s expropriated property in Cairo, filed a petition in a US appeals court last week, asking judges to restore his family’s lawsuit against the Coca-Cola company. The Jerusalem Post reports (with thanks: Ari, Lily):

In his petition to the US Second Circuit Court of Appeals, lawyers for Bigio charged that Coca-Cola Egypt is making use of property belonging to his family in Cairo’s Heliopolis suburb that was expropriated during the early 1960s in an anti- Jewish purge by then-president Gamel Abdel Nasser’s regime.

Bigio’s lawyers said that for 15 years, the Coca-Cola Company has refused to negotiate with the family for fair compensation for the property, although the global soft drinks giant has made hundreds of millions of dollars in profit from Coca-Cola Egypt.

In the 1930s, decades before to the property’s expropriation, the Bigio family had leased it to Coca-Cola, which was “fully aware that the property had been stolen from the family without compensation,” the family’s lawyers said. Wednesday’s appeal filing comes after the US Court of Appeals for the Second Circuit in New York dismissed Bigio’s case against Coca-Cola in March on the grounds that the Bigios had “not sufficiently alleged that the Coca-Cola Company headquarters in the US controlled Coca- Cola Egypt.”

Despite that ruling, however, judges did acknowledge that the Bigios’ lawyers had established that the el-Nasr Bottling Company (ENBC), the Egyptian government-owned firm that Coca-Cola purchased in 1994 and renamed Coca-Cola Egypt, had in fact trespassed on the Bigio family’s property.

In their petition, the Bigio family’s legal team argue that the judges dismissed the claim before Coca-Cola even answered the complaint, and before the plaintiffs were given opportunity for discovery, the pre-trial phase where parties can obtain evidence from each other including by requests for production of documents.

The Bigios’ lawyers added that Coca-Cola has “stonewalled” the family since 1994, when the family first expressed its objections to the company’s purchase of ENBC.

“Since 1997 [Coca-Cola] have also successfully blocked the family’s litigation from advancing beyond its initial stage,” the Bigios’ lawyers added.

The Bigio family is among the many Egyptian Jews from whom the Egyptian authorities under Nasser’s “Arab socialist” regime expropriated and nationalized land and property.

In November 1961, the Beirut newspaper al-Hayat printed the text of a Nasser decree, which stated that “all Jews included in the list of sequestrations are deprived of their civic rights and cannot serve as guardians, caretakers or proxies in any business association or club.”

Profile of Bigio lawyer Nat Lewin in the Washington Times (with thanks: Michelle-Malca)

here is another report on the Bigio vs Coke story:

"In a news statement distributed by his attorney, the Washington firm of Lewin & Lewin, Bigio said ..."

This father-daugther dynamic duo is the go-to point for legal issues destined for the US Supreme Court. http://www.lewinlewin.com/files/Lewin_Washington_Jewish_Week.pdf Nov 3, 2011 article about the attorney, who has argued 28 cases before the Court. There is also a 2009 press release related to the then-12 year old Bigio court case on the Lewins' website.

11/2/2011 11:50 AM
'Supreme' advocate No. 28 for Nat Lewin
There are more than 1 million practicing attorneys in the U.S., according to the American Bar Association, and the vast majority of them have at least one professional footnote in common: They have never argued a case before the U.S. Supreme Court...

The html version behind the WJW pdf has moved behind a paywall http://washingtonjewishweek.com/main.asp?Search=1&ArticleID=16006&SectionID=133&SubSectionID=273&S=1

More this week from Edwin Black in the Jewish Press:
http://www.jewishpress.com/indepth/front-page/the-egyptian-jew-whos-battling-coca-cola/2012/06/06/0/?print


Ironically, as Bigio squares off against Kent over Nazi and Egyptian anti-Jewish persecution, the greatest insult may not be to average sensibilities but to the legacy of Kent’s own father, Necdet Kent.

Muhtar Kent is a Turkish Muslim. His father earned distinction as the Turkish Muslim diplomat who courageously placed his own life on the line to save Jews during World War II. The elder Kent was Turkey’s vice consul-general in Nazi-dominated Marseilles, France, between 1941 and 1944. He distributed Turkish citizenship papers to dozens of Turkish Jews living in France to save them from round-ups and deportation that would deliver them to Nazi gas chambers.

...One singular act of valor by the elder Kent occurred in Marseilles one night in 1943. Nazis and French police were herding local Turkish Jews into cattle cars.... The Gestapo officer pleaded with Kent to jump off. He would not, ....

As for Coke’s legal argument that “Seizure of Jewish citizens’ property in Nazi Germany did not violate international law,” which it asserted as a basis to excuse a similar theft in Egypt, a Coke spokesman stated, “Mischaracterizing a legal citation from a 1997 court filing to suggest that it represents our Company’s broader, well-established views on universal human rights is inappropriate. To even remotely suggest that the Company somehow condones the Nazi seizure of property is ridiculous and offensive.” But attorneys Alyza and Nathan Lewin maintain that Coca-Cola’s pleadings speak for themselves. Coke claims its use of the Bigios’ property is legal because Nasser’s seizure of Jewish property was lawful. In making that argument, Coke adopted the position that “Nazi seizure of Jewish property was not an illegal act.”

As to whether Coke chairman Muhtar Kent had dishonored his father’s legacy by advocating that “seizure of Jewish citizen’s property in Nazi Germany did not violate international law,” a Coke spokesman stated, “This is not relevant to this case.” When Kent’s office was called directly, the switchboard operator said Kent “does not wish to talk about it.”

But Bigio does want to talk about it. He says the case is now between him and Muhtar Kent. “Only Kent,” Bigio insists, “can do the right thing.”

Edwin Black is the award-winning and New York Times bestselling author of “IBM and the Holocaust” as well as “The Farhud: Roots of the Arab-Nazi Alliance in the Holocaust.”