If you listened only to leftwing and human rights groups, you would conclude that Jews had no rights in 'Arab' East Jerusalem, argues Lyn Julius in the Times of Israel.

This Lag BaOmer, Jewish pilgrims will be flocking to the tomb of a Second Temple-era high priest, Simeon the Just (Shimon Hatzaddik), in East Jerusalem. But the celebrations will be subdued compared to times gone by: in the 19th century, witnesses report that the entire city, in which Jews were a majority, took part in a massive festival, watched by Christians and Muslims. There was candle lighting, dancing, prayers, haircuts for children. The pilgrims made donations according to the weight of the trimmed hair.

In 1876 Ashkenazi and Sephardi communities in Jerusalem jointly purchased the site next to Shimon Hatzaddik’s tomb. They built dwellings for the pilgrims on part of the site. The Jewish residents of some 100 homes were among the first to be expelled when hostilities broke out at the end of 1947. Arab families moved into the empty Jewish homes. From 1949 to 1967 Jews could not visit the holy sites under Jordanian rule — a violation of the 1949 armistice agreement.

This year’s celebrations will take place against a backdrop of legal wrangling over the ownership of Shimon Hatzaddik, Nahalat Shimon and Jewish neighborhoods adjoining the Arab neighborhood of Sheikh Jarrah. Over the last few years, human rights and left-wing groups have held weekly demonstrations protesting Jewish settlement in “Arab East Jerusalem.” 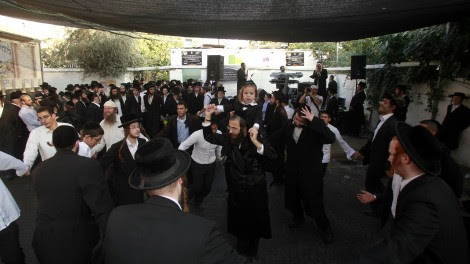 Jewish revelers at the Tomb of Simeon the Just in Jerusalem (photo credit: Uri Lenz/Flash90)

Some Jewish former owners have been resorting to the Israeli courts to have their properties returned to them in areas conquered by Israel in 1967.

” I demand to get my property back,” 76-year-old Elisha Ben-Tzur told Ynet News a couple of years ago. “My grandfather built this house and the synagogue that was burned down by Arabs in 1948. Before Sheikh Jarrah, we lived in Silwan, but were expelled out of there as well.”

The courts have not always ruled in the Jewish petitioners’ favor, recognizing that the current inhabitants’ rights must also be protected under the law. The only those Arab tenant families to be evicted from Sheikh Jarrah where those that had failed to pay rent. But groups such as Sheikh Jarrah Solidarity have insisted on portraying these cases as “Israeli settlers evicting the rightful Palestinian owners.”

More recently groups such as Yachad — known as the British J-Street — have taken up the cause of the Arab Sumarin family in Silwan, charging that they are victims of an Israeli policy to “Judaize” Jerusalem. The Sumarins had protested that settlers, backed by the JNF, wished to take over their house, but an Israeli court ruled they had no title. Even the Independent newspaper conceded that technically, Israel was “acting within the bounds of its own law” in the Sumarin case. The current occupier is not the legal owner, although he initially won his case in the Israeli courts, before it was proved that he had forged ownership documents. The media fumed with indignation that settlers linked to the very heart of the Israeli establishment were taking over “Arab” property. An international outcry has forced a delay in the implementation of the verdict.

Again, Silwan is being misrepresented as a Palestinian village in East Jerusalem, despite the fact that poor Yemenite Jews lived in stone houses at the southern end of the village for about 50 years. Only in 1938, after attacks on the Jewish residents, did Silwan become Judenrein on the advice of the British.

Human rights groups eager to defend Arab property rights are curiously indifferent when it comes to Jews reclaiming their property. Many of these claimants are Sephardim or Mizrahim, but a veil of silence is drawn over their rights.

Why Yachad alienates Jews from the Middle East
Posted by bataween at Friday, May 04, 2012