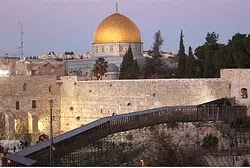 "It's a political issue more than an Arab or Jewish property issue," says the lawyer representing the defendants in the case, as the Israeli Supreme Court orders two Arab squatters in Jerusalem’s Old City to vacate the homes they are occupying. Report in Israel National News:

Lawyer Mohammed Dahleh said the court had rejected his clients’ appeal on the basis that the properties had been legally acquired by Jewish prior to the establishment of Israel in 1948.

“It went through the Magistrates Court, the District Court and now the Supreme Court,” Dahleh said.

The Supreme Court also ordered the plaintiff's – Ghazi Zalum’s house and Ismail Wazwaz – to pay all the legal costs.

Both properties – one a residence, the other a shop – are in the Al-Qarameh neighborhood between the Church of the Holy Sepulchre and the Temple Mount.

Zalum complained to the AFP that there had been a systematic takeover by settlers of properties in the area.

“With my evacuation, Israel has evacuated half of the Al-Qarameh neighborhood and Aqbat al-Khaldiyya as part of an organized policy of clearing the Old City,” he charged.

“It is more of a political issue than an Arab or Jewish property issue. This move comes with the announcement of the elections and is a message to Israelis saying: we are liberating Jerusalem from the Arabs,” he said, referring to a decision by Israeli Prime Minister Benjamin Netanyahu to call early elections this September.

The identities of the Jewish owners who won the court battle were not immediately available.

Jews were forced to abandon their properties and flee when Judea, Samaria, and eastern Jerusalem when Jordan invaded and occupied the territory during Israel's War of Independence.

Israel liberated the Old City along with the territories occupied by Jordan, originally slated for the Jewish state under the British Mandate, in the 1967 Six Day War.

Jewish organizations dedicated to re-establishing the Jewish presence in the the Old City and eastern Jerusalem frequently scour archives for documents proving Jewish ownership of properties in the area.

Jews were forced to abandon their properties and flee when Judea, Samaria, and eastern Jerusalem when Jordan invaded and occupied the territory during Israel's War of Independence.

In fact, Jews were being driven out of parts of the Old City outside of the old Jewish Quarter starting 28 years before Israeli independence. The Nebi Musa pogrom killed Jews in the Old City in April 1920. Pogroms were repeated in 1929, and 1936-38, resulting in driving Jews out of the Muslim and Christian quarters where many Jews had lived in the 19th century. Further, it was not the Transjordanian [now Jordanian] Arab Legion that drove Jews of their homes in the War of Independence. Attacks on Jews in the Old City began in December 1947, if not already on 30 November 1947. These attacks were encouraged and sometimes organized by the Arab Higher Committee, not by Jordan.