The BBC has a report about the dilemmas facing Iranian Jews in Israel. There is more about RadisIN, the Farsi radio station beamed into Iran from Israel. But try as she might to depict Israeli-Iranians as 'caught in the middle', the reporter Beth Ryder finds that the unfinished Koresh cultural and social centre in Holon testifies to the younger generation's lack of interest in their Persian heritage.

Across town on the lower ground floor of a suburban shopping centre, Parviz Barhourder helps to run a full-time radio operation in his native Farsi language.

Every day of the week, Iranian poetry, music, and politics can be heard blasting over the air waves of Radio RadisIN, but the station has one overall aim - peace.

"Throughout history, until the current regime came to power, there had been constant good relations between Iran and Israel. The aim of our station is to re-establish that relationship," Parviz explains.

Since the station's establishment three years ago, a team of 38 Iranian-Israeli volunteers keep RadisIN streaming over the internet, cable and satellite to a large national and international audience of Farsi speakers.

The station takes calls, SMS messages and emails from listeners in Iran, and one of the most commonly talked about subjects, Parviz says, is the impact that Western economic sanctions are having on the country.

"People talk about their weariness with the current situation and tell us how they're having to store food and other life necessities at home."

Parviz is concerned about the impact military action could have on his Jewish friends who remain in Iran.

"I'm worried about them. If anything happens, the regime will take them as hostages," he says. 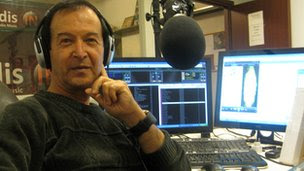 Parviz Barhourder estimates his station has around 6,000 listeners in Iran

Iran is home to the largest population of Jews in the Middle East outside of Israel. Numbers have declined since the establishment of Israel in 1948, and the revolution which saw the overthrow of the Shah in 1979, but an estimated 25,000 still live there.

"We need to convince the current regime in Tehran to leave their atomic project and become another normal country," says Parviz.

"As soon as they have access to an atomic bomb, a third world war will be created."

He does not want to see war with his homeland, but - like many in the community - he would ultimately support military action as a last option.

"If it comes between the hammer and the rock, what are we going to do? The window of opportunity is getting narrower and narrower everyday."

Not far from studio, the Beit Koresh community centre for Holon's Iranian population is closed and unfinished. There is a Persian library, but this can only be accessed when the building is open - and that is very rarely.

Standing outside, Kamal Penhasi - editor of Israel's only Farsi-language magazine Shahyad - remembers the role the centre played for him, arriving in Holon as a 16-year-old in 1979.

"The centre seemed so beautiful, we would come here every week - it was really important," he says.

But as Iranians have become more integrated in Israel, many of the younger generation have lost interest - the community has just not pulled behind the centre, says Kamal.

"Every Iranian in Holon knows about Beit Koresh - if we were united we could finish the project.

"But we are a wealthy people and everyone wants to be a manager."

These days, Iranian-Israelis are an integrated and economically successful group. Shaul Mofaz, the newly elected leader of the country's opposition Kadima party is Iranian-born for example.

Construction began on Beit Koresh over 30 years ago with the financial aid of Iran's Shah - that was a time when relations between pro-Western Iran and Israel were broadly warm. These days, it is illegal for anyone with an Israeli passport to visit Iran.

Kamal longs to see the removal of the current regime but thinks the most likely way for that to happen is for change to come from within.

"The Iranian people, especially the youth, are capable of bringing about political change, as we saw after the 2009 presidential elections. We in the West should be willing to step in and help them with financing, logistics, information and media support."

At the magazine's headquarters, a small shop just off the main stretch in Holon, Kamal's 22-year-old niece Rose Penhasi says she is worried for Iranian civilians.

"I'm afraid for students like myself in Iran. Here in Israel, we are free to say what we feel, but I know in Tehran they are scared." 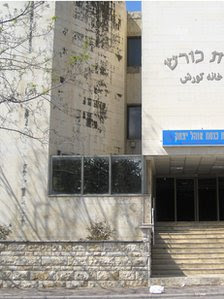 Beit Koresh community centre was once a hub for Iranian-Israelis

Despite being born in Israel, Rose learnt Farsi at home before speaking Hebrew, and still tries to maintain links with the country of her parents.

"I used to be able to talk to people my age in Tehran via internet chat rooms and social media, but these days government blocks are making it increasingly difficult."

Her interest in Iran is unusual amongst her peers. "When I'm at home with my parents and grandparents, I feel 100% Iranian, but when I'm out with my friends, I'm Israeli."

"Most second generation Iranians have forgotten their roots," she says.

It is important, she says, for people to acknowledge the distinction between the Iranian people and the regime.

"The civilians in Iran are not like the government and we need make sure they know that Israelis love and support them."

Rose hopes to visit Tehran one day, to see the family home in Amir Abad she has heard so many stories about, but in the current climate this option is out of the question.

Article by Ben Lynfield in the Times of Israel