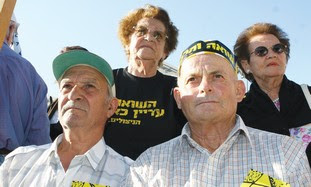 If they arrived in Israel after 1953, North African Jews who suffered at the hands of the Nazis and their wartime allies are ineligible for compensation. The Jerusalem Post has the story:

They suffered a similar fate to European Jews during World War II, yet 67 years after the war, thousands of North African Holocaust victims remain unrecognized by the State of Israel and are ineligible for compensation.

According to Dr. Miriam Gez-Avigal, chairwoman of the Public Committee for the Integration of Eastern Jews, immigrants who moved to Israel after 1953 fail to receive Holocaust-era restitution – despite efforts made over the past decade to recognize and compensate Holocaust survivors from Morocco, Tunisia, Libya and Algeria.

“On this Remembrance Day, we are calling on the government to address a historical injustice and immediately provide compensation to survivors who immigrated from North Africa after 1953,” Gez-Avigal said. She estimates there are 2,000 survivors from Tunisia and a few thousand more from other North African countries.

“There is no reason that people who were persecuted by the Nazis and who suffered during the war should live out the last years of their lives destitute and without dignity because of unjust and unreasonable legislation,” Gez-Avigal added.

During the war, much of North Africa was either under direct Nazi occupation or under the control of its allies.

Jews there were singled out for harsh treatment, with many sent to forced labor or death camps in Europe while others had their property repossessed or were forced to wear a yellow star.

Following the war and the creation of the Jewish state, North African Jews sought aliya – similar to communities from Europe – but, according to Gez-Avigal, their arrival was delayed due to logistical constraints.

Decisions made by the Jewish Agency meant that many Tunisian Jews did not emigrate until the mid-1950s.

Despite the fact that North African Jews could not schedule an aliya date, a 1957 law dealing with compensation for victims of Nazi persecution states that only those who arrived in Israel before 1953 are officially eligible to receive financial reparations.

Today this pay comes – via the government-run Holocaust survivors Rights Authority located in the Finance Ministry – from German and other European governments under various agreements reached with the Conference for Material Claims Against Germany.

“We have been recognized by the German government and the French government, the money is there but the Treasury has refused to release it because the law does not recognize those that came after 1953,” Gez-Avigal said, adding that the dwindling Holocaust survivors’ living situations deteriorate daily.

The Finance Ministry says that survivors who arrived after 1953 miss the compensation threshold but emphasize that additional amendments expanded eligibility for a few thousand Libyan Jews who came before 1953. Survivors of death camps, labor camps and ghettos – regardless of when they arrived here – collect Holocaust restitution funds.

Nachum Itzkovitz, director-general of the Welfare and Social Services Ministry, told The Jerusalem Post that he was among the first to publicize the loophole excluding thousands of North African survivors from additional financial aid.

“There is no doubt that we have already taken many steps to address this problem, even though there is a lot more that needs to be done,” Itzkovitz said, as the law excluding those who made aliya after 1953 also neglects other countries’ survivors.

Itzkovitz said that a law passed in 2008 expanded the definition of who is a Holocaust survivor and increased the number of people eligible for financial assistance. The ministry hears requests from many individuals who believe that they now qualify for aid.

Read article in full
Posted by bataween at Thursday, April 19, 2012

Email ThisBlogThis!Share to TwitterShare to FacebookShare to Pinterest
Labels: Holocaust in Arab and Muslim lands, Jews of North Africa, Jews of Tunisia