My barmy Barmitzvah - in Abu Dhabi

No country is off-limits to the intrepid Chabad - least of all Abu Dhabi, where rabbis Bob and Khaled (sic) cast off their baseball caps to perform an unusual mitzvah. Charming coming-of-age story in Ingulfed blog: (with thanks: Andrew)

They both took off their baseball caps, and under them — yarmulkes. Dressed and bearded to the nines of Hasidic custom, these two Chabad rabbis had come via Dubai from Brooklyn to light candles with relocated Jews on a legally nonspecific floor of our Abu Dhabi apartment building (lets call it twenty-three). It was the fifth night of Hanukkah, a night that for its inability to ever fall on the Sabbath — the week’s most holy day — is distinctly holy. The rabbis resolved the apparent paradox: clearly, this day must need no help to get holier.

The rabbis, henceforth Rabbi Bob and Rabbi Khaled (for puzzling social, possibly legal reasons), led the Hanukkah blessings, touching the shamas to all five candles, now burning brightly with the green light from the minarets below. Everyone felt that all around us, there was Islam and spirited expatriatism — not as marks of oppression, but as marks of distinction: what made us run-of-the-mill deli patrons in New York now made us bakers of homemade bagels and fasters at unpredictable seasons. And with shared distinction comes a kind of solidarity, a kind of fort-like refuge. Still, we mustn’t build a moat — the hardest part is joining together without snubbing those who aren’t gathered. But with blessed juices flowing, chocolate coins clinking against the tile floor, and kids screaming encouragement at their dreidels — that didn’t really seem like a problem. 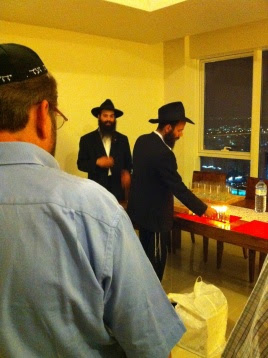 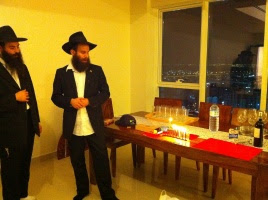 And of course, as with any Jewish gathering — there was a bit of bargaining.

“Have you ever put on tefillin before?” Rabbi Bob asked.
I waffled — I couldn’t remember what that was exactly. He explained: tefillin are boxes containing bits of scripture that very observant Jews may wear on the arm and head during morning prayers. Known also as “phylacteries”. Sounded like some kind of nosy dinosaur you’d meet at the pharmacy. I wasn’t sold.

“Uhh, I don’t think so. I was never Bar Mitzvahed.” I told him the quick story of how my parents had offered me the choice when I was seven or eight to go to Hebrew School and prepare for a Bar Mitzvah. It wasn’t a big deal to them and — seeing my Jewish friends complaining and missing hours of video game and playtime on Wednesdays and Sundays — it wasn’t a big deal to me either.

“Come join us tomorrow morning — it will be your Bar Mitzvah.”
It all seemed so fast. These were the guys I’d always given a birth wider than earshot on the Columbia campus or on Subway platforms for fear of joining a Jewish cult or missing “30 Rock”.

“I… I have to be at work tomorrow,” I explained, rueful.
“We’ll do it beforehand — plus, isn’t that your boss?”
Could I really change my identity as an unbarmitzvahed Jew that quickly? so efficient and convenient to my work schedule? Isn’t religion supposed to be difficult?

But Bob then, perhaps unknowingly, made the perfect appeal to my love of the absurd and illogical. “Where else,” said Bob, “if not in Abu Dhabi?”
Touche, rabbi.

Already late for work at 9:30 AM, I ascended to the apartment they’d been given for the night. Rabbi Khaled answered the door, welcoming me in to an apartment strewn with what my limited vocabulary might describe collectively as “Jewy things”.

Bob handed me a kippah. He wrapped the leather strap of the shel rosh around my forehead, the shel yad round and round my left arm, down to my palm and several times around my middle finger. Each held a box filled with unknown words — one pressed against the head, the other wedged against the heart. 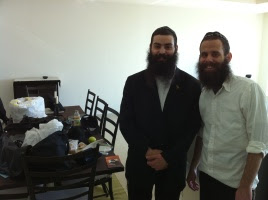 I held a page-long prayer, written in English.
“God understands all languages,” said Bob.
I never mentioned that I wasn’t completely sure about that guy — that even though he’s surely the character in the Torah everyone least identifies with, I’m not all too convinced there’s anyone even there to do the understanding. I started reading.

Looking out at decades of Islamic architecture and a cityscape adorned with mosque domes and pictures of Sheikhs, I performed the Jewish liturgical version of a Las Vegas Wedding. For those who put on tefillin every day, it is a continuous affirmation of their beliefs, of their devotion. For me — “one time only” — I rode this mitzvah on the express train to manhood, eight years late by traditional custom, and only an hour late for work.

I exited on to the street, unwrapping celebratory chocolate the Rabbis had brought from Israel. (A bad job at UAE customs, maybe?) Another man (I recognized them now in solidarity) asked me for directions. I pointed him in precisely the right direction, with instructions exact to the meter. So this is what it is to be an adult.

Read blogpost in full
Posted by bataween at Tuesday, April 24, 2012

I take it there are no synagogues in UAE? Are there many jews there?

No, there are no synagogues and no Jews. But as the article tells you there are individual Jewish expatriates working there and a clandestine Chabad presence