How did Morocco get from massacres to tolerance?

While Andrew Rosemarine's attempt in The Times of Israel to recall the terrible massacre of Fez - whose 100th anniversary is this week - is praiseworthy, there is a dissonance with the rest of his article, which tries to portray Morocco as a beacon of tolerance and even judeophilia. When and how did the Morocco of the Fez pogrom become the friendly place he knows and loves? My comments in italics.

During Holocaust Remembrance Day week, it is important to remember that Sephardim too have suffered terribly at the hands of our enemies. Indeed, exactly 100 years ago this week, mutinous Moroccan troops looted the mellah (ghetto) in Fes, Morocco’s then capital, murdering 45 Jews and wounding many more. Nobody remembers it now, but the 1912 Tritl (as it is known in Morocco, “sacking” ) has powerful resonances today.

To mention the Holocaust in the same breath as the Fez pogrom is awkward and distasteful. There is no real connection between the two events. Yes, Sephardim have suffered at the hands of our enemies, but the rest of Rosemarine's article tries to prove the opposite - that Morocco is an exception - a beacon of tolerance.

The link between Fes and Jewish persecution is a close one. Jews were murdered here every time an anti-Jewish sultan gave the green light.

This is rather misleading. In the case of the Fez pogrom (Fes is the French name) the sultan Moulay Hafid actually saved Jews from being murdered by opening up his palace to them.

Prior to the Tritl, the sultan Yazid hung over a dozen Jews who refused to convert to Islam around 1790, and the rest converted for fear of the gallows. You can find Muslims in the city to this day called El Kohen, and you know their origins! (The current Mayor, Mr. Shabbat, who has accused Jews of wanting to take over the world, is presumably also a descendant.) Maimonides, the philosopher who studied and perhaps taught at the local university, the Qarawiyyin, saw his own teacher put to death here, so the head of the Fes community has told me.

True - Fez has an ugly history of forced conversion. Around a quarter of Muslims are descended from Jewish converts.

The echoes of the persecution are still live. One of those murdered in Fes in 1912 was a Madame Serrero. Benjamin Serrero, a friendly fellow, with whom I dined on a recent visit, helped organize synagogue services here. He was bludgeoned to death with a hammer last month. One of the children murdered recently in Toulouse was Myriam Monsonego, a direct descendant of the Chief Rabbis Monsonego of Fes.

I visited the head of Fes’s Jewish community, Dr. Guigui. He’s a physician, much loved by the local population as a whole. One of my local contacts, unaware of my interest in this community, told me he’s the best doctor in town. We discussed centuries of persecution, and then moved on to the positive, as Dr Guigui told me with great pride of the recent refurbishment of an old synagogue here, and showed me photos of him together with England’s Prince Charles, when they visited it together last year. In his surgery, I met two Muslim students, who organized a symposium on the Holocaust near to here, unique in Arab lands. While Ahmedinajad adds to Jewish suffering by denying the Holocaust, young Muslim students spread awareness of it, as humanitarians, in Morocco.

Two sympathetic Muslims are not representative. In fact, they encountered antisemitism for being too Judeophilic. 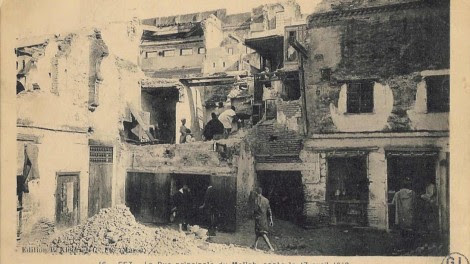 The aftermath of the Fez pogrom (photo credit: Ben-Zvi Institute)

Fortunately, most Jews in today’s Morocco feel safe, even with an avowedly Muslim-headed government. King Mohamed VI, as his father before him, has been highly appreciative and protective of them, and the kings are much loved in return. Indeed, the king’s grandfather, Mohamed V, has a status equivalent to that of a saint, having refused to hand the Jews over to the pro-Nazi Vichy occupying forces, during the Second World War.

This is the stuff of legend: King Mohammed V never handed over the Jews to the pro-Nazi Vichy forces because they never asked him to do so. On the contrary, there is plenty of evidence that he rubber-stamped many discriminatory anti-Jewish Vichy decrees.

As far as Moroccan Jews worldwide are concerned, he is more popular than any gentile sovereign since Cyrus the Great helped build the Second Temple. (Current Persian heads of state are a little less popular today.)

Attitudes toward Jews are often positive in this country. A schoolteacher of my acquaintance, K, a committed and fervent Muslim, even tells me that most of the prophets in the Koran are Jewish. He is correct, but don’t repeat his words elsewhere in the Arab world, or you’ll find yourself in the local stocks.

Why are Moroccan Muslims’ attitudes to Jews so often different from those held by their coreligionists elsewhere in North Africa and the Middle East?

Not so, according to this newspaper article.

First, they are far away from the Arab-Israel conflict. (...) As far as protecting their Jewish minority is concerned, what the kings say and do matters. They appointed Jews as ministers and royal advisers, showing the royal seal of approval. But where there were at least 200,000 Jews 70 years ago, today under 5,000 remain.

Ah, there's the rub. No matter what the king says and does, the Jews continue to desert Morocco.

Serge Berdugo, the ebullient secretary-general of Moroccan Jewry and a former minister of tourism, is optimistic about the current state of his community. He tells me of his good relations with the new Islamic Premier, Abdelilah Benkirane. Newspapers photographed them embracing warmly the night Mr Benkirane won parliamentary elections. The joint message of the two leaders – Jews and Muslims get on well together in today’s Morocco.

Berdugo is a court Jew whose job is to project Morocco's 'tolerant' image.

May this be a beacon of tolerance for all of North Africa and the Middle East.

A curious disconnect here. This is the country where Benjamin Serrero was just bludgeoned to death with a hammer.

Email ThisBlogThis!Share to TwitterShare to FacebookShare to Pinterest
Labels: Antisemitism, Holocaust in Arab and Muslim lands, Jews of Morocco

"Maimonides, the philosopher who studied and perhaps taught at the local university, the Qarawiyyin, saw his own teacher put to death here, so the head of the Fes community has told me."

This is something that we should never let pass unchallenged.

There isn't a shred of evidence that Maimonides ever studied at the Qarawyyn, and that for many reasons. There is, however, plenty of evidence that he didn't, based on his own writings and on his own life.
In fact, it would have been suicidal for a fugitive from Andalusia to go to the area of the Qarawyyn. he would have stuck lout like a sore thumb. The Qarawyyn, as it name indicates, was a mosque founded by Kairouanese who came to that spot in previous centuries, with a school that prepared Muslim theologians and offered them elements of general knowledge, but only in as much as it had to do with Islamic jurispruence.

Beside, scholars of that time of Maimonides' magnitude, whether Jewish or Muslims, didn't study in schools but with teachers in their own homes and studied books.


Enough with this lie.

Addendum: the Qarawyyn became a degree-granting University in 1947.

Sylvia, you point out just one more discrepancy in an article already based far too much on hearsay and wishful thinking.