Celebrating the coming out from Egypt - in Egypt

A motley collection of some 50 people turned up to this year's Passover Seder, held at the Adly synagogue in Cairo - half the attendance of previous years. The customary Israeli embassy Seder was cancelled for security reasons, with the diplomats flown back to Israel to be with their families. The redoubtable head of the Cairo Jewish community, Carmen Weinstein, describes the Cairo celebrations in her Bassatine newsletter. A guest from Texas, Maurice Shammah, whose father hailed from Aleppo in Syria, blogged about the evening, but in her own account Ms Weinstein is at pains to correct some of Shammah's false impressions.

"This year we held Seder in Shaar Hashamayim and as is our custom we invited Jewish students, expats and foreign diplomats as well as Jewish tourists and visitors passing through Cairo. In view of circumstances we estimated an attendance of 30 tops including the Jewish Community members and their families and friends. But as more and more attendees appeared at the last minute, we ended about 50. True this is still far less than half the number of previous years but then Egypt had its revolution in January 2011 and things are still volatile to say the least. 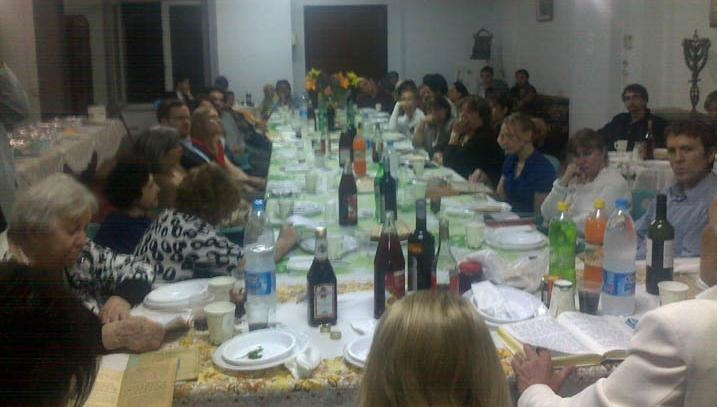 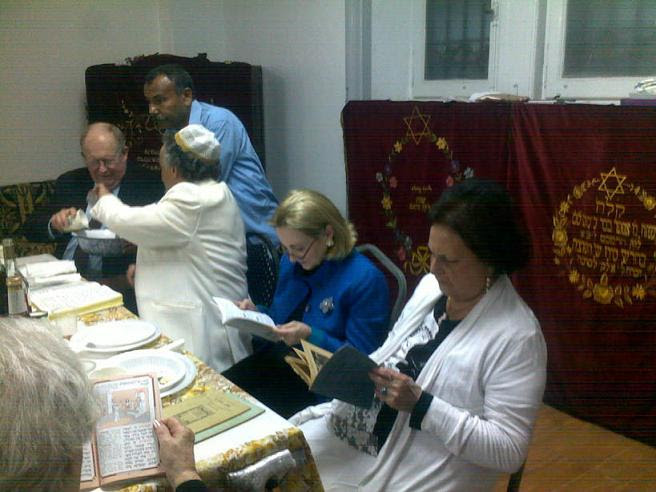 "This year's Passover was presided by Rabbi Marc El Fassy. Our fearless white knight arrived from France "envers et malgre tous" who begged him not to come as it might be too dangerous. As though Toulouse was not dangerous, or Jerusalem and Los Angeles for that matter!

"Also as is customary in Egypt there was lots of food, drink and fruit provided by the Community. In addition, there were the beautiful flowers brought by some of the guests adding to the festive atmosphere.

"This year we also had the pleasure of hosting Maurice Chammah and his young American wife. The 2011- 2012 Fulbright Fellow and sometime violonist in Texas thoughtfully posted an essay on his blog (see below), which made me realize how people see us from the exterior and how mistaken this vision can sometimes be. I am therefore commenting on Chammah's informative blog with regards the JCC in an attempt to give readers a more factual perspective of our tiny community.

"1. A Cornell University graduate in Near Eastern studies, Mr. Chammah misguidedly states on his blog that US-AID restored the Synagogue and its adjoining reception halls (where the Seder was held). The Synagogue was indeed restored in 1980 following the Peace Treaty between Egypt and Israel but as already mentioned in Issue No. 12 of Bassatine News, which Chammah did not read, the funds for that landmark enterprise came from the World Sephardic Federation headed at the time by Mr Nessim Gaon of Geneva, Switzerland.

"At my request as president of the JCC, the Synagogue was once again restored in 2007 but this time under the supervision of the Egyptian Ministry of Culture's Antiquities Department headed then by Mr Zahi Hawas. It was the year in which we celebrated Shaar Hashamayim's centennial. The Department took it upon itself to paint the entire Synagogue and refurbish the marble Bima which had collapsed. Additionally, the said Department repaved the alley leading to the courtyard. The JCC meanwhile restored the reception rooms and renovated some of the facilities adding a marble fountain in the courtyard at its own expense. US-AID was never involved in ANY of the above. 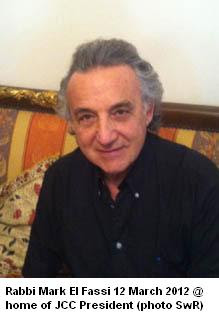 "2. Until about ten years ago, the ambassador of Israel would hold Seder in a Cairo Hotel or in the embassy residence garden in Maadi. Over and above the embassy staff he generously invited the members of the Cairo Jewish Community as well as Jewish expats, tourists and students. When this practice stopped due to a change in ambassadors, the JCC reversed the process so that now it was for the members of the Israeli embassy (not traveling for the High Holiday) to celebrate with the JCC at Shaar Hashamayim Synagogue.

"As for the special menu and dishes, these are supplied courtesy of the JOINTand NOT as erroneously mentioned the Israeli Embassy. Likewise, the Joint also subsidizes the JCC with imported medicine and some of the hospital bills.

"3. If the rituals are read out and explained in Hebrew, French, Arabic and English, this is to help attendees understand some of our liturgy. This multi-babble is customary with Egyptian Jews who were always adept in many languages. Somehow, any conversation would start with one language and then shift to another and so on.

"To our young American blogger the above may sound strange but the same thing can be said about the medley of people who through the decades attended our celebrations. In my own family, in the days when Egypt numbered 70,000 Jews, we always invited Moslem and Christian friends to partake in our celebrations. In return, we were invited to attend Xmas or Easter services in Cairo's many churches. And, as always, the first day of Ramadan, we were breaking the fast with our Moslem friends. Their Bayram (religious holiday) was shared by us. There was never any problem in having a mix of Jews, Christians and Moslems at various religious holidays. So why should it be different now?! Perhaps it was also the same for the late Professor Albert Moise Chammah who hailed from Aleppo, Syria (Maurice's father passed away in Austin, Texas in 2008)."

I think all the points of view converge together to give the true picture for who knpows to read between the lines - and between the texts.

Thanks Bataween for bringing this.

It is interesting that for 50 persons to be able to gather for a festival, you need thirty policemen to protect them.

nice posting.. thanks for sharing..

I'm finding it difficult to get information about visiting the synagogue, as it was closed when I went past last. Is it possible to attend on Saturdays? and what time is the service? thanks