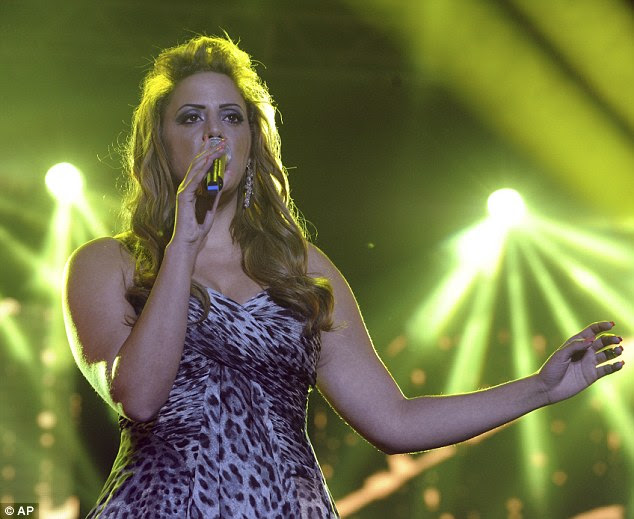 Nessrin Kader, an Arab singer from Haifa, is proud to have won an Israeli Mizrahi music talent show. The story has even made it to the British mainstream popular press (The Daily Mail), providing a rare opportunity to explain the existence of Jews of Middle Eastern and North African culture in Israel. What would really be newsworthy, however, would be a Jewish singer winning a contest in the Arab world (With thanks: Michelle).

Kader, for her part, has stirred up mixed feelings among Israelis. They marvel at the power of her voice, but are uncertain about how to deal with her Arab ethnicity.

'My friends criticised the host, Eyal Golan: "Why did you pick an Arab? You chose an enemy and let her win the show,"' said Moshe Alfassi, an Israeli of Moroccan descent who works with troubled youth.

Alfassi, 27, said he found it strange to see an Arab woman singing Mizrahi music, but like many other Israelis, was quickly won over by her voice. Eliyahu Haviv, a 70-year-old Iranian-born Israeli, said Kader deserved her victory, and shouldn't be viewed through the prism of the Israeli-Palestinian conflict. He noted, as many Israelis did, that Kader sang in Hebrew to God to protect the people of Israel in a song that was originally written to commemorate slain Israeli soldiers.

'She sang our prayers, and I think it was very good because she sang them with emotion,' Haviv said.

'I say yes, there are Arab terrorists, but this is something else. We need to be as one heart.'

'We are taught that in the house of Israel, there will be a prayer for all people,' said Eliyahu Dahan, 50, a Jerusalem bar owner. 'That was her song.'


When Middle Eastern Jews fled en masse to Israel in the years following the Jewish state's establishment in 1948, they encountered a European Jewish establishment that regarded them, and their cultures, as inferior and threatening because they resembled their Arab enemies.

"Israeli entertainer Golan said he faced criticism for his choice, but said Kader's talent couldn't be ignored. He is currently producing an album for he.r"

Israeli entertainer Golan said he faced criticism for his choice, but said Kader's talent couldn't be ignored. He is currently producing an album for her.

That included Mizrahi music, which was seen as lowbrow - a stigma that still lingers. The music ranges from soaring liturgical chants to cheesy pop that is indistinguishable from top-40 tunes in the Arab world. In an echo of that Arabic heritage, many Mizrahi Jews enjoy classic Arabic songs - tunes that Kader belted out to the delight of the audience in the studio for the show's final.

Her victory is part of a small but growing trend of Arab artists and entertainers rising to prominence.Read article in full
Posted by bataween at Saturday, April 07, 2012

Arab Jewish culture is indeed seen as inferior in Israeli society. Israeli culture is overwhelmingly Euro-centric despite having a Mizrahi majority. Although it's worth noting that most of Israel's well-known pop stars were all Mizrahi (Ofra Haza and Shoshanna Damari, for example).

I don't think it's true to say that Israel's popular culture is overwhelmingly Eurocentric. You say yourself that most Israeli pop stars are Mizrahi. This talent show is proof of how popular Israel's Mizrahi pop culture really is.
Where Israel is Eurocentric is in its political and intellectual mindset and ignorance of the history of Jews from the MENA.

I don't know why all the fuss about her identity. Talent is all that should matter.

Bataween indeed most Israeli pop stars are Mizrahi and they're practically the only ones making a living out of their music - and very much resented for that.

They are constantly assaulted debased and degraded. The fashion now when you say "Mizrahi music" you have to mention in the same breath that it is decadent, mediocre, badly written. They even have conferences to discuss just how bad "Mizrahi music" is. They want to change it. They still think they can dictate.


The point is that the good old days when you could dictate who can or cannot make it in the music industry are now over. It's all a matter of supply and demand.