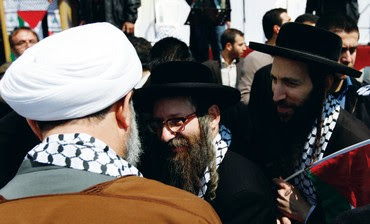 Undaunted by their beating in Jordan, Neturei Karta 'rabbis' have moved to Sidon where their media circus is again lending credibility to the artificial distinction between 'Jew' and 'Zionist'. This article in the Jerusalem Post also lends credence to the myth that most Lebanese Jews left during the Lebanese civil war and the Israeli invasion. Most left before and immediately after the Six-Day war as a result of antisemitism.
Prayers were held for the first time in decades Monday at a synagogue in Sidon, Lebanon, as American anti-Zionist rabbis visited the site 30 years after the city’s last Jews left.

Two rabbis from the Natorei Karta movement toured the building – once Sidon’s main synagogue – in the area still known as the southern coastal city’s “Jewish quarter.” The building, which still bears Star of David motifs and Hebrew inscriptions, now houses Palestinian refugees from the 1967 Six Day War and their descendants.

The rabbis wore Arab keffiyehs around their necks, and badges on their chest reading in English and Arabic, “A Jew, not a Zionist.”

Beirut’s Daily Star newspaper reported the rabbis expressed hoped the current tenants would “soon return home,” and their pain at the “crimes and sufferings inflicted by the Zionist movement and Israel on Palestinians in and outside Palestine.”

Judaism is one of 18 religious sects officially recognized in Lebanon. The country’s Jewish population peaked at around 20,000 at the turn of the last century, but today numbers only a few dozen – almost all in Beirut.

Sidon’s small Jewish population began to shrink in 1948 when some left for the newborn State of Israel. The city’s Jewish community began dwindling after the 1975 outbreak of Lebanon’s Civil War, and its last members left after the Israeli military invasion seven years later.

Inside the Sidon 'synagogue'

“For 40 years we have not seen a rabbi in Sidon. And the last Jewish families left after the Israeli invasion of Lebanon in 1982, fearing reprisals,” a resident told the AFP news agency, adding that Jews still owned land and property in the city.

Photos of the Sidon (Saida) Jewish cemetery and synagogue
Posted by bataween at Thursday, April 05, 2012