Jews of the Arab world are already home 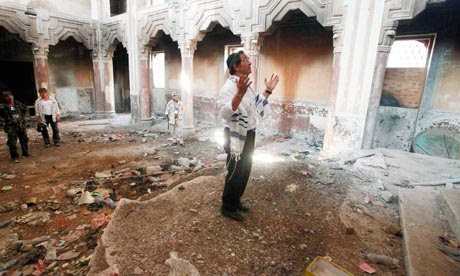 David Gerbi praying in a Tripoli synagogue. Foreign Policy magazine did not mention he had left Libya after receiving threats to his life

Jonathan Tobin in his Commentary blog is right to call out Foreign Policy magazine on their bizarre and misleading statement that the 'Arab Spring' is the best chance for exiled Jewish communities 'to return home'. Aside from the fact that Iran is not an Arab country, the word 'dwindling' in the title is better replaced by 'extinct'. And photos of Arabs restoring Jewish buildings or reading Hebrew cannot mask the ethnic cleansing of Jewish people from the region. (With thanks: Eliyahu)

Do the descendants of Jews who fled the Arab and Muslim world in 1948 want to “go home?” That’s the odd question asked today by Foreign Policy magazine in introducing a photo essay featuring images of the remnants of Jewish life in places like Libya, Iraq and Iran. But while the photos are interesting, the idea that “the uncertain revolutions of the past year may present the best chance for long-exiled Jewish communities across the Middle East to return home” is probably the most bizarre as well as misleading statements published on the topic in some time. Not only are Jews not longing to return to the Arab world, the so-called Arab Spring has unleashed forces of Islamism that makes such an unlikely occurrence even less inviting for anyone foolish enough to believe that Jews are welcome there.

For decades one of the most appalling gaps in knowledge of the modern history of the Middle East is the way even supposedly educated people ignore the fact that what happened in 1948 was an exchange of populations. (My emphasis -ed). While hundreds of thousands of Arabs fled the area that would become the State of Israel, hundreds of thousands of Jews were fled, usually for fear of the lives, from Arab countries where Jews had lived for more than a millennium. The difference between the two sets of refugees is that while the Jews were resettled in Israel and the West, the Arabs were left refused homes elsewhere in the Middle East and kept in camps where they were told to wait until the Jewish state was destroyed.

The descendants of those Arab refugees, whose numbers we are amount to several millions, are still waiting and their demands for a “return” continues to serve as a standing impediment to the otherwise dim hopes for peace. Meanwhile the descendants of the Jews of the Arab and Muslim world have been successfully integrated into Israeli life. They rightly insist that any compensation to the descendants of the original Arab refugees should be matched by payments to the Jews for the property they left behind. These demands are routinely ignored, as is the entire narrative of Jewish dispossession.

Rather than the Arab Spring helping to create a situation where amends might be made for the Jews who were expelled from countries like Egypt, the rise of Islamist parties there has made the status of religious minorities even more uncertain. While Jews once thrived in the Muslim world, albeit under the intermittent threat of persecution and pogroms, the notion that Jews would be free to live there while expressing their identity is farcical.

In the first picture in the essay, the magazine notes the example of David Gerbi who returned to Libya after the fall of Qaddafi hoping to begin the reclaim a lost synagogue. But they fail to note that he was arrested and threaten with violence for doing so. In the next photo, they put forward the claim that Jews live freely in Iran and are not put out by the anti-Semitic invective that flows from its government. Here again, the caption fails to note that Iranian Jews are the subject of frequent persecution and are virtual hostages living under threat of punishment for speaking freely about their situation. The magazine’s portrayal is reminiscent of Roger Cohen’s infamous whitewash of Iran on this subject.

There are some bright spots Foreign Policy can actually point to. One is Iraq where Hebrew studies have been encouraged. But this is more the work of the long American presence in the country than any popular sentiment to welcome home those who were victimized by pogroms in the 1940s. In Iraqi Kurdistan, there is the chance for good relations with Israel and the Jews but that only demonstrates the Kurds’ determination** to reject the Islamism that dominates Iran and some parties in Iraq.

However, the magazine altogether misses the one example of a successful Jewish community in the Arab world that predates the Arab spring: Tunisia where the Jews of Djerba have never left*. Unfortunately, the rise of Islamist parties in post-authoritarian Tunisia makes their stay a bit more precarious.

*The Jews of Djerba were encouraged to stay because they were essential to tourism in Tunisia. Only 1,500 are left, and hardly any in the Hara Sghrira on Djerba, where the al-Ghriba synagogue stands.

**More likely it reflects some Kurds' determination to distance themselves from the Iraqi government. Kurdish rebels have in the past been allied with Israel. Nevertheless there are no Jews in Kurdistan.
Posted by bataween at Sunday, March 25, 2012

The bizarre statement in Foreign Policy that Tobin refers to really shows the depths of hatred of Israel and implicitly of Jews [since Israel is the collective Jew in everyone's mind]. The author of the statement in FP yearns to see the Jews leave Israel [in order to weaken Israel so that it can be destroyed], so he fantasizes that Yemen or Iraq or Libya, etc., were "home" for Jews who were "exiled" from those places, maybe by Zionist machinations. The real history and status of Jews in Arab/Muslim lands is of no concern since his Judeophobia operates at a deep level of his mind.

I am sorry but Mr. Tobin is a "mekhabel" (meaning his mind is confused).
Enough is enough: we shall not go back!!!
sultana vidal