The underlying assumption of this Associated Press article, picked up by Haaretz and Ynet News, is that the Iranian government can be expected to lash out against its own Jews in the event of an Israeli airstrike against Iran's nuclear facilities. But why should they retaliate, when the Islamic regime tries hard to prove how tolerant it is of non-Zionist Jews? (With thanks: Lily)

The level of worry among Jews in Iran themselves is harder to measure. At a tomb in southern Iran said to be the grave of the biblical prophet Daniel a popular pilgrimage site for Iranian Jews those visiting on a recent day were reluctant to talk about politics or the rising tensions between Iran and Israel, preferring to talk about their visit.

"I prayed for peace in the world. I asked for health and blessing for all people, I prayed for all," said Erieh Dina, after she recited prayers in Hebrew next to her husband in front of the grave.

The rising crisis illustrates the uneasy situation of Iran's Jews, the largest community in the Middle East outside of Israel and Turkey. They are believed to number around 25,000, after two major waves of emigration following Israel's founding in 1948 and the Islamic Revolution in 1979. Before the revolution they numbered around 100,000. 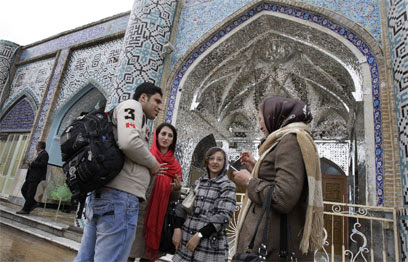 Many in the community, centered in Tehran and the southern city of Shiraz, are affluent merchants. Publicly, they are supportive of a system that offers them protected minority status though not equal access to certain government and military jobs and assures them a seat in the Iranian parliament.

"No matter who dares to attack our country, we will stand against the threats like other Iranian people," the current Jewish lawmaker in the Iranian parliament, Siamak Merehsedq, told The Associated Press in Tehran. "The Iranian Jewish community will stand by their compatriots under any circumstance, forever."

In general, the community tries to lie low. Tensions between Iran and Israel have been high for years, and the leadership of hard-line Muslim clerics has not tried to retaliate against Iranian Jews, in part because it likes to tout their presence as proof of the government's tolerance. The biggest exception to that was the trial in 2000 of 13 Iranian Jews on charges of spying for Israel, which raised heavy international criticism.

The ornate tomb of Daniel in Susa, 450 miles (750 kilometers) southwest of the capital Tehran, is cited by Iranians as an example of the historic bonds of Jews and Muslims in the country. The site is popular among both Muslims and Jews, and some of the pious credit their prayers at the site for healing sick relatives or bringing rain for crops. Hundreds visit ever day, including high school students on field trips from around the country.

The grave is in an underground crypt that is usually open only to Jews, while both they and Muslims can visit an above-ground shrine over it, dazzling with mirrored tiles. In a sign of respect to the Jewish community, Iran's supreme leader Ayatollah Ali Khamenei ordered an inscription put on the grave reading, "This is the shining tomb of the sagacious prophet Daniel, who directed believers while tolerating difficulties for the sake of God."

But an outright Israeli attack against Iran would be unprecedented and could put a heavy test on the government's policy toward the community. Like the West, Israel is convinced Iran's nuclear program is being developed to build bombs, and not to generate energy and medical isotopes as Tehran claims.

It sees a nuclear-armed Iran as threatening the Jewish state's survival, and sparking a nuclear arms race in a region hostile to Israel's existence. In the US last week, Prime Minister Benjamin Netanyahu vigorously asserted Israel's right to defend itself militarily against the Iranian nuclear threat.

Israeli officials say the presence of Jews in Iran won't influence Israel's decision on whether to strike.

Iran's Jewish community is one of the world's oldest centers of Judaism, its historical roots reaching back 2,700 years. One of Judaism's most revered figures is Esther, the Jewish queen of Persia and heroine of the Purim holiday who foiled a vizier's plan to annihilate the empire's Jews.

Empress Trudy said:
So the question you have to ask yourself is, if all the Iranian Jews are herded into rail cars for extermination, will any of our liberal pundits and media moral angels in the west even mention it? I think not. And since they won't can we ultimately expect any better treatment here? Again, no.

General western apathy might well be the reaction. But I am asking a different questions: what makes people like this AP journalist assume that the Regime will take revenge on Iran's own Jews? Is it the 'racism of low expectations'?

in my humble opinion, if ever Israel attacks Iran, it will be extremely difficult for Iranians not to lash out on the Jews in their country.
It has always been like this and even sometimes without any reason.
sultana latifa

I think the journalist is of course attempting to frame the argument in bigoted racist tones as if the evil Jews of Israel don't care or worse, even want to see their co religionists in Iran suffer and die for their war on the peaceful peace loving Persians of peace. The journalist is attempting to make Iranian Jews a kind of rhetorical human shield - - - as if Jew haters have ever once been seriously worried by ANY human shields let alone Jewish human shields. And in the wider scope of history, from the fall of the Shah where there were perhaps a quarter million Persian Jews, there's probably no more than 10,000 today. Clearly after all that's gone on, they're the revenant that's NEVER going to leave. Sorry but there's nothing to be done for them.

The scenario depicted by the Associated Press article and picked up by Haaretz and Ynet News simply shows ALL of these sources hatred to Israel, because, in so doing, they WARN Israel to rein in their offensive (as in best defense) intentions, and give Iran the idea they may not have thought of in the first place! These are leftists scheming - but NOT for the sake of pure reporting.