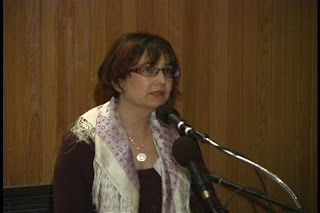 Susan Akram: Palestinian refugees should return to the dwelings they left. So should Jews from Arab countries

De-Judaised, Arab Jews. That's the future for Israeli Jews envisaged by Harvard's recent 'One-state solution' conference. Apparently the word sharia was not uttered once, but the expression 'Arab Jew' became ubiquitous. Read this hilarious description of the conference proceedings by Janet Tassel in American Thinker. Via It's Complicated blog.
One questioner, a rabbi without a congregation, asked a panel member whether "Jews, even Lefties like me, will be able to live in Palestine." After the desired approbatory chuckle, the participants were unanimous in emphasizing the absolute equality of Palestinians and Jews in the coming state. This sentiment was repeated in every panel, but the quid pro quo would of course be a "voluntary" dismantling of all the modalities of Israeli power and identity. Everyone agreed this won't be easy for the Jewish Israelis, which is why they also stated repeatedly that change must come from the bottom. The Occupy movement was suggested as a model. Incidentals such as Article 7 of the Hamas Charter ("The Day of Judgment will not come until Muslims fight Jews and kill them") were not considered, perhaps because of time constraints.

One possibility for the newly disempowered Israeli Jews, said Leila Farsakh, associate professor in political science at the University of Massachusetts at Boston, would be to "reconnect with their Arabism." Indeed, the term "Arab Jew" became ubiquitous toward the end of the conference. Or, as Marc Ellis, director of the Center for Jewish Studies at Baylor University, himself a Jew, said, "Becoming un-Jewish is the first step." After that would come, in his words, "revolutionary forgiveness."

Rabbi Rosen emphasized that the "hysteria" of people like Abe Foxman and Alan Dershowitz is a symptom of desperation, completely out of touch with this new vision, which, by the way, is understood primarily by academics and the young. Another sign of desperation is Birthright Israel, he said. "Look how much money is being spent to send rich kids to Israel." Evidently, a Jewish Israel is so yesterday.

So if the promised land is to be a haven for Palestinians and de-Judaized Arab Jews, who will be the elect and how will it work? According to Susan Akram, a professor at Boston University School of Law, there must be Palestinian self-determination. Then there must be a recognized Right of Return -- for all Palestinian refugees "to the same dwellings they left." She called this "mass property repossession," and emphasized that "a return to the West Bank for refugees from Jaffa is not a satisfactory recognition of their right." But to be fair to Akram, she did add that Jewish refugees from Arab countries should have the same right of return. This might be hard to picture.

Read article in full
Posted by bataween at Tuesday, March 13, 2012

The views about Jews expressed at this conference of bigots demonstrate a deep contempt for Jews as such, for self-respecting Jews in particular. It is curious that these Arabs overlook the Quran's dictum that the Holy Land was assigned by Allah to the Jews [sura 5:20-22]. Nevertheless, this is a profound religious bigotry on the part of the Arabs & Muslims, and likely on the part of Arabic-Speaking Christians who support their position, too.

Susan Akram, like Abu Ghazaleh & Mubaidhin in the previous post, seem to think that the Jews belong to the country where they originated --whether Poland or Germany, as Helen Thomas would have it, or Arab countries. But the Jews don't have or own any country [the country owns them] and they don't have a say as to where they want to live. Nor does the history of the Jews have any meaning or even exist, nor is it important what the traditional Jewish beliefs about themselves and their origins may have been. Moreover, Jewish traditions have no importance. Only Arab & Muslim traditions have importance.
But I don't call this racism. This is more Arab & Muslim religious and ethnic supremacism than a genetic-biological racism.

You put it very well, Eliyahu - the country owns them.

The country owns them, because in the traditional Islamic state the Jews and other dhimmis were a convenient source of income for the state --in the name of the Muslims as a whole. So the Jews [and other dhimmis] have a role to play in the Islamic state. They supply income to the Muslims [jizya] but have no say in affairs of state. They have no inherent human rights but --as Bat Yeor pointed out-- they have to buy a license to live every year [by paying jizya]. If they don't pay their jizya, they can be put to death according to Muslim law.

Dhimitude is indentured servitude, instead of being called semi-slavery, the laborers entered it voluntarily because for fear of their lives. It is extortion under the malignant cover of religious protection and interdependence.