'We can't link with countries who justify theft' 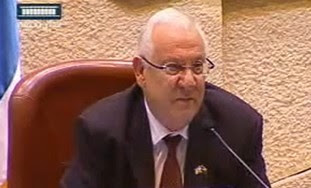 Peace with Arab countries will not be possible if they do not compensate the Jews who were expelled after the establishment of the State of Israel, Knesset Speaker Reuven Rivlin said on Monday, the Jerusalem Post reports. He was speaking at a conference to mark the second anniversary of the passing of the Knesset law calling for compensation to Jewish refugees from Arab countries and Iran. (With thanks: Simon)

MK Nissim Ze’ev (Shas), whose parents were banished from Iraq, called the conference two years after the passage of his bill to require any peace treaty to include reparations to Jewish refugees, in hopes of ensuring the law’s implementation. He also said that he would form a Knesset caucus to promote the cause.

“In negotiations, there are two sides,” Ze’ev pointed out. “The world – especially the US and Europe – must realize that [Jewish] refugees have rights.”

Speaking at the conference, Rivlin said that Jews from Arab countries were happy to immigrate to Israel, but that does not erase the humiliation of having their property confiscated as they left.

“We cannot have relations with a country that justifies stealing,” he explained. “If there is a treaty between Israel and Arab countries, reparations must be included.”

The Knesset Speaker said that the same demand is made of European countries, not only for victims of the Holocaust, but also for those who immigrated to Israel and lost property because of pogroms and anti-Semitism.

MK Einat Wilf (Independence) pointed out that the UN Relief and Works Agency, which deals only with Palestinian refugees, gives a baby born in Gaza refugee status, not just those who fled the 1948 War of Independence.

“There are 30,000 refugees, not five million. The world only knows half the story,” she said. “There are Jewish refugees and there are Arab refugees. Both sides must be compensated, because there were victims on both sides.”

Now is the time to fight for Jewish refugees

This conference at the Knesset was really good, and very much important.
Because, if previously the heads of Jews from Arab countries Associations, used to testify at the European Parliaments - under the roof of JJAC - this time it was Fiorella Provera, Vice Chairman of the European Parliament who came to hear us at the Knesset in Jerusalem. Came too, Kent Ekeroth from the Sweden Parliament, and Sharon Bonichi, Executive of the Pan European Freedom Alliance.
During the Conference at the Knesset, testified Meir Kahlon for the Lybian Jews, Zvi Gabbay for Iraki Jews, and Levana Zamir for Egyptian Jews.
Now, MK Nissim Zeev, expects the quartet to take over the subject of establishing the International Fund, even as a unilateral action, to compensate the Palestinian refugees and take them out of their refugees camps. To compensate the Jews from arab countries too, of course...
Levana