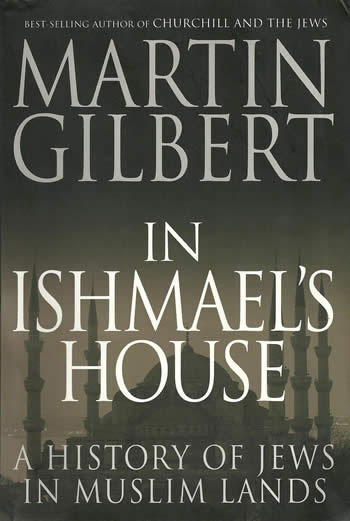 Martin Gilbert's groundbreaking book In Ishmael's House was published in 2010, but it is not too late for Jay Levinson's review in the Jewish Magazine (February 2012). (With thanks: Eliyahu)

What went wrong? It is common belief that Jews under Moslem rule experienced virtual "honeymoon" conditions until enmity and violence broke out only after the publication of the Balfour Declaration. The epitome of cooperation was the Middle Ages, a golden age of literature and culture. Why did sweet wine turn into sour vinegar? How did friendly relations deteriorate into open warfare? Sir Martin Gilbert, a renowned British historian of impeccable repute, tries to answer these questions in a thoroughly researched study.

Gilbert's research clearly belies commonly held misconceptions. More than once he stresses that historically Jews fared much better under Moslem rule than in Christendom, but he essentially contradicts the existence of a medieval golden age. There certainly were Jews who attained high achievements, but the community as a whole were kept in dhimmi status, a polite way of saying tolerated subjects restricted in residence and employment, and required to pay special taxes. Throughout the centuries there certainly were outbreaks of anti-Jewish rioting, however by-and-large life in the Moslem world offered more security and safety than the Christian-inspired Inquisition and waves of pogroms.

As modern ideas began to take hold in the 19th century, even the decadent Ottoman Empire recognized the new value system, Jews were granted increasing equality. A new nationalism spread as the world entered the 20th century, and Jews in Moslem countries such as Iraq and Egypt rose to high positions in business and government. The 1910s and 1920s were the heyday of success and prosperity. Then, the bubble burst. Tolerance degenerated into the invasion of five Arab armies determined to squash the newly declared State of Israel.

The author ascribes the decay of relations to three basic causes: (1) the rise of Zionism seen by many as a contradiction to Arab nationalism, (2) European political interests, and (3) Nazi agitation and propaganda.

The 1920s and 1930s were a period of national movements in the Arab world, culminating in the independence of the Trans-Jordan, Syria, and other countries, eventually including Morocco and Algeria. Yet, the direction of nationalism was unclear. Pan-Arabism worked against the concept of individual nation-states. Military and dictatorial governments were pitted against monarchial rule. There was unity at the governmental level on one point --- there was no room for a Jewish state in what was perceived to be the great Arab expanse (although there are some examples of Arab leaders who supported Zionist ambitions). Gilbert does give numerous cases of Moslem-Jewish interaction at the personal level; many friendships continued despite political strains.

Middle Eastern politics cannot be divorced from European interests. England and France were struggling to hold on to their crumbling empires and were reluctant to offer too much support to Jews at the expense of angering the Arabs. Russia's primary motivation was to spread communism.

Nazis viewed the Arabs as potential cohorts, particularly in light of the staunch support that Hitler personally received from the Mufti of Jerusalem. Even before the outbreak of war Nazi radio broadcasts and written propaganda were aimed at stirring up anti-Jewish sentiment along with agitating against the British and French. This helped gain support for the Germans as their army swept through North Africa with an evantual goal of wrestling Palestine from British control.

The results of the general situation were ugly. Jews were interned under Nazi rule in North Africa, and there were instances of anti-Jewish riots even without the presence of Germans. The May 1941 pogrom in Iraq was the ugly culmination of anti-Jewish legislation promulgated in the country that welcomed the Mufti of Jerusalem as a political refugee from the British.

Fervor swept the Arab world as their armies drove into Israel in what was promised to be a quick rout of the Jews. In the eyes of many, Judaism and Zionism had become synonymous, and as Zionists became the enemy, so did the Jew become the foe. It was time to leave. The centuries of productive lives for Jews in the Moslem world were coming to a bitter end. As the years went by, life became worse for those Jews who would not or could not leave. Gilbert gives all too many examples of Jews in places like Egypt, Syria and Iraq who were jailed without cause. Their property was often confiscated, and many were lucky if they were released alive from prison.

Gilbert is steadfast in his conclusion that Jews from "Ishmael's House" are no less refugees than Arabs who perpetuate their status through such mechanisms as UNWRA. He adds one point which all too many Arabs chose to ignore --- the Arab countries have lost all of the contributions that Jewish exiles have made to literature, science, and numerous other fields.

I have that book (In Ishamel's House")and it is a monument.
Sir martin is Jewish like most of us and writes beautifully in a flowing ENglish as should be!
I encourage you to get hold of it.
sultana latifa

I have still one question in my head : did progrom against Jews in Arab countries start after the turn of XIX/XX century ? Really ? If it is like that it seems reasonable to me to find a possible cause in western influence ( idea of race, of nation and National Socialism ). Otherwise maybe it is only question of missing of documented historical evidence that missed before XIX century.
i will buy this book anyway...

The answer to your question is no, the pogroms cannot all be blamed on the West. See
here
http://jewishrefugees.blogspot.com/2011/01/massacre-of-jews-by-muslims-before-1948.html
This is not exhaustive, by any means. Sporadic pogroms were accompanied by continuous pressure to convert - see Maimonides' writing in the 12th c.
Muhammad certainly had no help from the West when he massacred the Jews of Arabia in the 7th c, and that is the template for the jihadists of today.

Thank you Mr Bataween for your answer unforunately confirming gloomy view. Proselitism to convert is as old as monotheism but after Christian diffusion it became a powerful tool in the hands of the power. On my side I discovered forced conversion and "progroms" are easily traceable since third century BC when modern notion of West did not exist.
Intestine and cruent struggles between Christians favoured Islam exceptional expansion and what it is sure is that Western influence did not made Middle East a better place. Yet a vision of a more tolerant Islam cultivated by some Jews as well was only a desperate illusion .