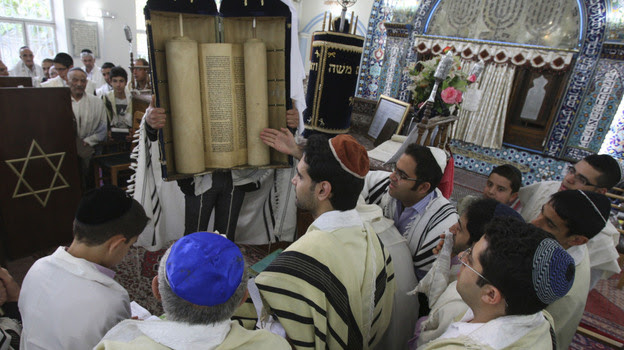 Iranian Jews celebrate a Shabbat service in a Tehran synagogue

Mixed feelings amongst Persian Jews are the order of the day in this NPR radio report, although no actual Jews in Iran are interviewed, only their relatives in Israel. Meanwhile Iran's Supreme Leader, Ayatollah Khamenei, has no mixed feelings whatsoever: in this widely-reported speech a few days ago he is unequivocal that the Jews should be annihilated.

Iranian Jews travel to Israel via Turkey, with special documents from the Israeli Embassy there that let them enter the country undetected by Iranian authorities.

Aaron says his cousin visited from Tehran just two months ago. Unfortunately, he says, he can't travel to Iran because he only has an Israeli passport.

Aaron says he is proud of his Persian ancestry, yet he's also loyal to the Jewish state. But lately, he says, because of the tension with Iran, he feels conflicted about what could happen next.

There are fears that Israel could strike at Iran's nuclear facilities. Israel says Tehran wants to develop nuclear weapons; Iran maintains that its nuclear program has only civilian uses. There have been four rounds of U.N. sanctions against Iran, as well as harsher measures taken by the U.S. and the European Union.

Aaron says it's all taking its toll. He says he feels terrible for people in Iran, where life is getting difficult.

On a recent day, he calls his cousins in Iran to see how they are. Speaking in Farsi, his relatives there tell him that they want to sell their house but can't, the currency is devaluing and it's a struggle to make ends meet.

Tears rolls down Aaron's face as he hears their news.

After he hangs up, Aaron says he doesn't think it's right to hurt the people in Iran. He says something should be done to hurt the Iranian government instead.

Those mixed feelings are pervasive among the Iranian Jewish community here.

may God take care of him and annihilate him!!!
sultana latifa