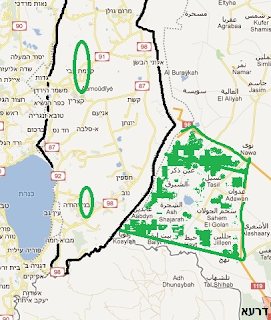 This blog has already drawn attention to the little-known fact that Jews own substantial property in what is now Syria. Now more evidence comes from Guy Bechor in this GPlanet article in Hebrew: (via Elder of Ziyon)

Bechor writes that some 100,000 hectares were Jewish-owned in the Houran region, (as Michael Fischbach explains in his book Jewish property claims against Arab countries) landholdings almost equivalent to the total area of the Golan Heights, annexed to Israel since 1967. In the late 19th century a member of Hovevei Zion, Adam Rosenberg, a US lawyer, encouraged the purchase of cheap land in the Houran. Another leading purchaser was Baron Edmond de Rothschild. In spite of an Ottoman ban on immigrants and initial refusal to register the purchases, Jewish settlements were established on the land.

But the settlements were attacked and in 1896 all settlers were expelled. The Golan and Houran became part of the French mandate of Syria 'for reasons unclear', according to Bechor. Between 1944 and 1948 Syria confiscated the land - registered in the name of PICA, the Palestine Jewish Colonisation Association - without compensation. Title to the land was transferred in the 1950s from PICA to the Jewish National Fund.

Bechor makes the point that the Syrian seizure of these lands, replicated all over the Arab world where property belonging to 850,000 Jews was appropriated, was peacetime theft. These lands were not conquered in war.

He questions Israel's timidity asserting its rights to Jewish lands in the Houran. These lands were purchased with the hard-earned cash of individual Jews. They should be traded for the Golan Heights, which constitutes a mere 1/2 percent of Syrian territory, Bechor argues.

Read article in full
Posted by bataween at Thursday, February 02, 2012

Email ThisBlogThis!Share to TwitterShare to FacebookShare to Pinterest
Labels: Jewish refugees in Palestine, Jews of Syria

and what do they call what they stole from us?

I wonder what the after El Assad will be!

it will take a lot of years before Syria can re-stabilise itself.

during that time they will not bother Israel!
sultana latifa

As Syria rebuild itself - IF ?
The only country in the middle east that can help Syria is Israel - funny