The Iraqi parliament is planning to pass a new bill banning Iraqis from travelling to Israel, Al Jazeera online reported this week. If passed the bill would be one more nail in the coffin of 'normalisation' between Israel and Arab countries. Ynet News takes up the story:
The bill was proposed following a number of incidents at Baghdad airport. A local security officer working there said the passport had caught a number of Iraqi officials carrying passports with Israeli entry visas. The officer, speaking on a condition of anonymity, reported that the passports of some nine high-profile Iraqi politicians were clearly marked with Ben-Gurion Airport stamps as well. According to the source, the politicians made their first trips to Israel after the Iraqi elections, held on January 2010, until around October that same year. The officer claimed that during questioning of the Iraqis, it was discovered that they were operating as envoys to Israel on behalf of Iraqi politicians. 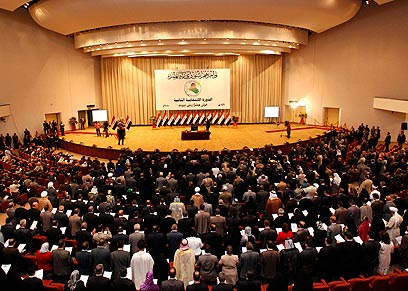 The Iraqi parliament may be targeting Israel (Photo: Reuters)

In response to the report, Iraqi Parliament Member from the National Iraqi Alliance Mohammad Redha al-Khafaji declared that some 50 parliament members have already put their John Hancock (signatures - ed) to a bill proposing to ban such trips to Israel. Khafaji emphasized that in the past, Iraqi senior officials had visited Israel secretly.

Meanwhile, a member of the parliament's judicial committee said these signatures do not necessarily mean that such a law should be passed.

Forbidding a citizen from traveling is against the Iraqis' right to freedom, as written in the constitution. However banning travel to Israel has nothing to do with politics, she told Al Jazeera, explaining that Iraq has never had any diplomatic or political relations with Israel, nor has it acknowledged the State of Israel.

Israel classifies Iraq, as well as most Arab countries, as an "enemy state." However, over the years senior Israeli officials have hinted on numerous occasions that despite having no official diplomatic relations with such countries, many times there are economical and security ties.

Read article in full
Posted by bataween at Thursday, February 02, 2012

these countries are gradually showing their real face!!!
while accepting the millions given by the US and other humanitarian organisation, they show how little they are "humane"
sul(tana latifa

The rabbi asked his disciples, "What causes theft?"

"Poverty" answered one.
"Hunger" answered another.

"No," said the rabbi. "People who buy stolen goods."

The one who gives money to the one who does something improper is encouraging an undesirable habit.