For this we left Baghdad? Inside the ma'abarot

The ma'abarot - transit camps - were home to hundreds of thousands of Jewish refugees flooding into the state of Israel in its infancy. Here are a few examples of around 150 photographs taken in the ma'abarot, from a wonderful national archive, launched to coincide with Israel's Jubilee in 1998, but just released for public use. 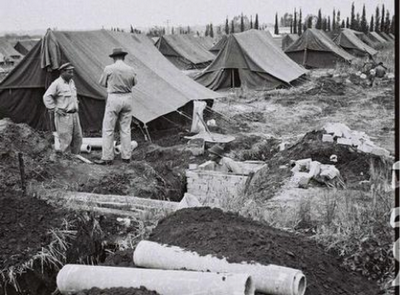 Canalisation pipes being laid at a Tel Aviv ma'abara 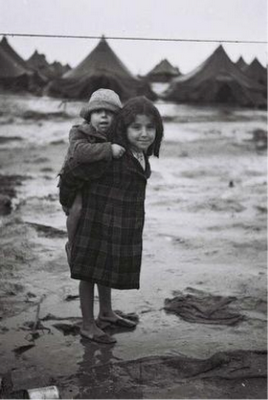 The conditions in these settlements were often terrible, with little amenities and very poor sanitation. Novelist Sami Michael, a refugee from Iraq, describes his first days in his new home.

“I woke from a deep sleep to a chill dawn. I rose, wrapped myself in my grey blanket as in a prayer shawl, and stood watching the turquoise strands of the first light. Pearly drops of dew had collected on top of the tent and dripped in a dark line on the sand. A gleam beyond the mountains heralded the sun striving to rise on a new day.

Children stepped out into the narrow passageways between the tents and went to defecate by the fence, covering their excrement with sand like a cat.

"The camp was waking up. Men fetched water from stand-pipes in buckets and pots and long lines began to form everywhere. My mother, uncombed and wrinkled looking, peered out from the tent flaps at a queue in front of the toilet and muttered:“For this we left our house in Baghdad?””

All my family the Souery family,(see picture at beginning of Point of no return)went to these tent camps. It was very hard and some never got back their life. Up to this day I cry for them.
sultana Latifa