"Death to the Jews! " heard again in Tunisia 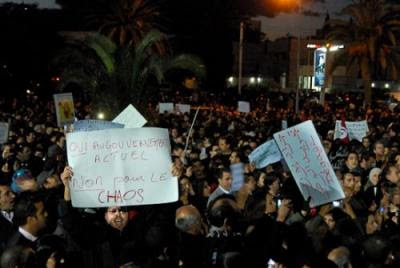 The seven-thousand strong crowd listening to Egyptian cleric Wajdi Ghonim yesterday morning in a sports stadium in Tunis was clearly heard to utter antisemitic slogans. It was the second time in a few weeks. More worryingly, the audience this time consisted of thousands, not hundreds (with thanks: Michelle):

According to a video report by Metula News Agency carried by the weblog Harissa, Islamist supporters were clearly heard to shout 'Slaughter the Jews!' and 'the Army of the Messiah is on the move!'

But opinion is clearly polarised in Tunisia. The video shows a Tunisian lawyer explaining that the event was interrupted by the authorities, fearing a confrontation between the Islamists inside the hall and 500 to 700 people outside.

A strong constituency remains in Tunisia for intellectual freedom and secular democracy. Some six thousand demonstrators turned out to protest religious extremism at the end of last month, according to this report on Tunisia Live.

Ever wonder why the antisemitic signs and shouts at these things are often in English? A language uncommon in that parrot the world. These messages are obviously directed at a majority-English speaking audience. Namely the West and primarily the USA. Agent provokauters? The Western intelligence network has been caught in the region, especially at these protests where they were trying to instill an idea. Usually sectarian voilence. Because for decades they have been so good at it. Nowadays they get exposed. Look what happened to Mossad in Egypt.

I think it is important to investigate these claims. Agent provacateur shills and plants are common even in the US occupy protests. They usually cover their faces and stir up trouble with the police. On purpose. Other useful idiots involve themselves and it winds up looking real.

Just remember this and don't kid yourselves with delusions. Why does the media make it appear that Muslims, primarily Arabs and Persians, hate Jews? They find some Koran verse, quote an extremist, mention pograms, etc. But there are Jews living in Iran. They are not persecuted. And Jews traditionally stuck together with Muslims due to zero tolerance Catholic policy. They traveled across North Africa to Spain before the inquistion expelled them both at the same time. Wealthy elitist Jews were treated like royalty in the Ottoman Empire. What changed? Zionism. Israel. Israel's treatment of Palestinians and warring with the entire region. Do not live in a delusion, this is a fact. The only reason those people hate Jews is because Jews, mainly the Zionists, hated them first. Don't drink the propaganda Kool aid. That's there for an agenda... The Zionist agenda to ethnically cleanse Palestinians from the land. Nothing more or less, you are foolish for taking their word.

Actually, these slogans were shouted in Arabic, and that's the point. The demonstrators are quoting Koranic verses.
I made the point that not all Tunisians agree, views are polarised on religion.
Your account of Jewish-Muslim cooperation is full of half-truths. The truth is that for much of 14 centuries the vast majority of Jews in North Africa were little more than slaves.

It is very clear that these frustrated people are looking for a scapegoat!
If they were not indoctrinated they would see that their woes do not come from the Jews!!!
But they are mostly not educated people and follow any old idea. And this is an old idea!
Sultana Latifa

I don't see any English. I see signs in FRENCH and in Arabic, the two languages widely spoken in Tunisia.

Regarding the comment: But there are Jews living in Iran. They are not persecuted.
In 2006, the BBC reported on
Iran's proud but discreet Jews with gems such as these, which undoubtedly support the commenter's assertion.


"It's not a problem coming and going; I went to Israel once through Turkey and once through Cyprus and it was not problem at all," she says.


"I am not going to leave - I will stay in Iran under any conditions," he declares.

Journalists will always find people to say on the record that everything in the garden is rosy. But for every Ciamak (who became Motamed's successor as the Jewish representative in the Majlis) there are several others who might disagree but would not dare say so.

there are 2 anonymous on point of no return. I always sigh by my name or pen name. could you, the other anonymous find a way of differentiating us?
sultana latifa

One of my numerous cousins,went anonymously to Israel (in 1949) but he was found out and directly expelled on his return leaving a pregnant wife behindµ.
That's how antisemitic they were!!! I've always known antisemitism on the part of Egyptians
sultana