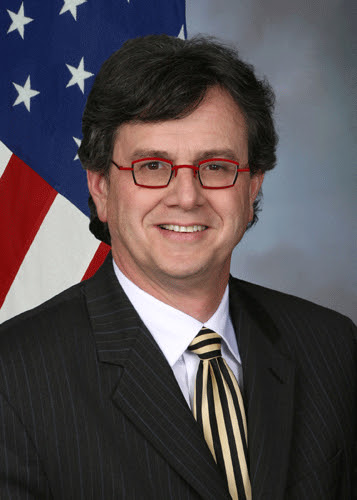 Following the shocking display of wishful thinking by US ambassador to Brussels Howard Gutman, Colin Rubenstein of the Australian Israel/Jewish Affairs Council asks why the West refuses to take seriously Arab and Muslim antisemitism, predating the creation of Israel. Those who see the rise of Islamism in Arab countries as 'moderate' are also indulging in wishful thinking:

The US Ambassador to Belgium, Howard Gutman, addressing a conference on antisemitism on November 30, controversially insisted that Muslim "hatred and indeed sometimes... violence directed at Jews generally [is] a result of the continuing tensions between Israel and the Palestinian territories" and should therefore not be seen as the same thing as "real" antisemitism. He went on to insist that a Mideast peace deal would see a "huge reduction of this form of labeled ‘antisemitism'."

Aside from the immorality of, effectively, rationalising a form of racism as due to the alleged behaviour of its targets, Gutman's comments were factually indefensible. There are clearly elements of strong, even eliminationist, antisemitism within the Muslim tradition predating Zionism by centuries.

A good example is the hadith [a saying attributed to the Prophet Muhammed] which was quoted by various figures associated with the Muslim Brotherhood at an election rally in Cairo on Nov. 26. It states: "The Hour [of judgement] will not come until the Muslims fight the Jews and kill them. When a Jew hides behind a rock or a tree, it will say, ‘O Muslim, O servant of Allah! There is a Jew behind me, come and kill him!'"

This hadith is among the most quoted passages about Jews in certain Islamic traditions. It is certainly part of the Hamas Charter and utilised by al-Qaeda as well as the Muslim Brotherhood.

It is true that, in medieval times, Jews in Muslim societies tended on the whole to be better off than in Christian Europe, but this is hardly to suggest that their human rights were fully respected. Further, Muslim antisemitism became more vicious and dangerous in the 19th and 20th centuries primarily due to the influence of modern European ideologies, including Nazism, which often came to be perceived through the lens of problematic anti-Jewish Islamic sources.

As a result, Jews across the Middle East began to suffer heightened violent hatred well before Israel and Zionism emerged on the agenda. In 1912, the Jewish quarter in Fez was almost destroyed in a mob attack. In the 1930s and 1940s pogroms and other attacks on the Jews were widespread in Iraq and Libya. Pro-Nazi Arabs slaughtered dozens of Jews in the "Farhoud" pogrom in Baghdad in 1941.

A good exhibit of the contemporary reality of this racist ideology was one of the speakers at the Nov. 26 Cairo Muslim Brotherhood rally - Sheikh Yusuf al-Qaradawi, probably the most popular Sunni cleric in the Arab world. He has previously described the Holocaust as "divine punishment" for the Jews and expressed the hope that "Allah willing, the next time will be at the hands of the [Muslim] believers." He also stated he wants to die a martyr in the process of killing "Allah's enemies, the Jews."

To imagine this ugly and pervasive amalgam of traditional regional and European antisemitism is all going to evaporate if Israel signs a peace deal with the Palestinians is fantasy. So why do people like Ambassador Gutman utter such fallacies?

Perhaps because it would make reality so much easier if it were true. The pervasiveness of Muslim and Arab antisemitism is a significant barrier to a lasting peace between Israel and its Arab neighbours. If we can fantasise that it will all disappear the minute a deal is signed, advocating a peace deal becomes so much more urgent, straightforward and uncomplicated compared to preparing a basis for peace by eradicating the inculcation of hatred and building an ethos of coexistence and compromise.

Does Israel cause Arab antisemitism? (Commentary blog by Michael Rubin)

Adam Levick at CifWatch points out that western media routinely ignore Arab antisemitism in favour of bad news from Israel.

I wouldn't say that the West neglects / misreads arab / islamic Jew-hatred, after all during the 1948 war I recall reading that a lot of the Western Elites actually funded and supplied weapons to Israel's enemies to finish what the nazis started (without of course getting their hands dirty) and can only conclude that they have been doing so ever since (essentially using the arabs / muslims as proxies to bring about their mutual wish regarding Jews while the West smugly condemns the Jews for defending themselves from the side-lines), it’s not like there is a dearth of evidence either.

If it is not the case at all, why is the West silent about arab / islamic surreal Jew-hatred and their glaringly obvious genocidal-intentions? Why the seemingly wilful ignorance of the West at things which are so clear that it almost makes you feel like you’re in a cynically predicable yet dangerously puerile version of the Punch and Judy show (…he’s behind you…)?

The West is silent because it is desperate to be 'fair' to both sides - by perpetuating the 'cycle of violence' myth.
The media therefore suppress anything with contradicts the 'narrative'.
I don't think that the West did fund Israel's enemies in 1948. the Soviet Union and Checkoslovakia supplied Israel.Later it was France, Britain and the US.

My theory is that it's because Arabs have oil!!!
sultana latifa

IMO, that’s being (very) kind on them, they lost any claim of being impartial or having the best of intentions before and since WWII, especially since their notion of “fair-play” entails having Israel’s hands tied behind their backs while arming the other side to the teeth, and trying to make sure that the Islamic-Israeli conflict is as foregone a conclusion as the Irish Euro Referendum where the Irish kept on voting NO almost in numerous reruns until they voted for the “correct” result, similar to Israel managing to “win” against their enemies aggression though being continually forbidden by world powers from totally destroying them.

The Western ruling elite actually did assist the 1948 British effort to destroy the new state of Israel, which involved (among other things) sending captured Nazi officers to lead the Arab armies and then there were Western Arabists such as Glubb Pasha and others, while I am unable to find the proper link it would not be a stretch to suggest that many of the elites / establishments in the West gave moral, financial and even military support to Israel’s enemies prior to and after Israel’s independence.

If that is the case than the West (or at least America and to lesser extent Canada) has had plenty of opportunities to tap into their own oil reserves under the banner of “ethical oil”, since the US or Canada is considered to have one of the world’s largest reserves.