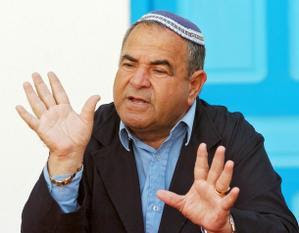 An Ennahda Islamist party spokeman has called the chants of 'Kill the Jews! It is our duty!" greeting the arrival of the Hamas leader in Tunisia an 'isolated incident', following complaints by Peres Trabelsi (pictured), a representative of the country's 1,500-member Jewish community. According to an AFP report in the Lebanon Daily Star, Mr Trabelsi protested: " There are no Zionists in Tunisia." (But Mr Trabelsi - when did Islamists ever make the distinction between Zionists and Jews?)

TUNIS: Jews in Tunisia asked the government Sunday to take steps to avoid a repeat of the anti-Semitic slogans chanted during a visit to the country by Gaza's Hamas leader last week.

"No Tunisian should be insulted, and the government must take measures to ensure this incident is never repeated," Peres Trabelsi, a representative of Tunisia's small Jewish population told AFP after the incident.

Ismail Haniya, prime minister in the Hamas-ruled Gaza Strip, visited Tunis on Thursday to meet the new moderate Islamist-led administration while he was on a tour of the region.

Islamist activists welcoming Haniya were heard chanting slogans like: "Kill the Jews, it is our duty", along with anti-Israeli and pro-Palestinian messages.

"There are no Zionists in Tunisia and we don't want to be mixed into the problems of the Middle East," said Trabelsi. "Tunisia is our country."

Tunisia has one of the Arab world's largest Jewish minorities, numbering about 1,500 individuals in a population of more than 10 million.

The population has shrunk drastically from the 100,000 Jews who lived in Tunisia after independence in 1956.

Ajmi Lourimi, a member of the moderate Islamist Ennahda party, said the slogans were an isolated incident that did not reflect the views of the government.