This tragic day, 43 years ago 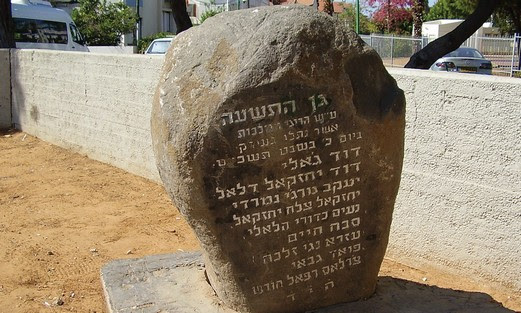 January 27, marks the anniversary of one of the darkest chapters in the annals of Iraqi Jewry. On that day in 1969, nine Jews were hanged in Baghdad’s central square. Few of the Jews who lived through that terrible period will ever forget it, writes Lyn Julius in the Jerusalem Post magazine.

Over 40 years later, the community and its representatives are still trying to grapple with the consequences of that fateful day.

Following the defeat of Arab armies on all fronts by Israel in the 1967 Six Day War and the 1968 ‘war of attrition’, the 3,000 Jews who remained in Iraq following the mass migration of the 1950s were being singled out for vengeance by the Iraqi regime. Dozens of Jews had been arrested and imprisoned. The remainder were placed under virtual house arrest. One Jewish girl remembers that secret service men installed themselves in armchairs opposite her house in order to keep her family under 24-hour surveillance. The tension was such that she and her mother made a suicide pact.

Jewish bank accounts were frozen. Jews lost their jobs. Jewish students were not allowed to pursue their university studies. Foreign trade agencies were taken away from Jews and handed over to Muslims. Telephones were cut off. There was no escape: Jews had to carry special identity cards and could not obtain the necessary passports in order to leave the country. They were virtual hostages to the regime.

Antisemitism intensified with the rise to power of the Ba’ath party in 1968. Saddam Hussein was its deputy leader. Before long the regime had concocted a story of ‘Zionist espionage’. The stage was set for a show trial of unspeakable cruelty and cynicism. Of nine Jews falsely accused of being Zionist spies, four were under the legal age to face execution. No matter – the regime falsified their ages.

The late Max Sawdayee describes the scene on 27 January 1969 in his book All waiting to be hanged:

“Masses of people, red, excited, smiling, laughing, walking fast, running, jostling – all with one and only one goal: to reach as quickly as possible the square where the ‘traitors’ are hanged. We take the same streets we came from, and return home. Wife tells us that she has heard from neighbours that the ‘spies’ now hanged in the Liberation Square were actually executed at the central prison at about eleven o’clock last night. They were brought to the Liberation Square at about two in the morning after improvised scaffolds had been erected by prisoners mobilised from the central prison, and by soldiers. She has heard also that many people were already there at two in the morning watching the scene of preparations for the hanging.


“The poor ‘actors’ of the scene... are dressed in special, humiliating brown linen trousers and shirts, barefoot, with the hands of some of them (for some mysterious reason) dressed in special white gloves. All of them are labelled with large sheets of paper stating, first of all and in big letters, their religion, then in small letters the reasons why they are hanged.

“ The sight of the nine, their heads twisted and drooping, their bodies dangling from the gallows and swinging high in the air, with all these vengeful mobs, all excited, agitated, cheering, dancing, chanting, singing, cursing the dead, spitting and throwing stones on them, or jumping high to catch their feet or their toes – well, this sight is most humiliating and sad, and most unforgettable. It shakes one to the bones. It shakes even one’s faith in humanity.


“When we tune in to our car radio, the announcer is still howling madly. ‘Great people of Iraq! You great people of Baghdad and Basra! Today is a holy day for all of you! Today is your feast! The day of your joy and happiness! The day on which you have got rid of the first gang of despicable spies! Iraq, your beloved Iraq, has executed, has hanged, has settled the account with those traitors! You great people of Baghdad and Basra, get free, move, go to your Liberation Squares to see with your own eyes how the traitors are hanged!’ then he goes on to read the names of those ‘traitors’, perhaps for the third or the fourth time. “


Morris Abdulezer, an Iraqi Jew now living in Canada, describes the lead-up to the hangings:

“These innocent men were tortured then put through a televised mockery of a military trial, which culminated in nine of them being publicly hanged, one acquitted and two others were sent to Basra to face another trial and then were hanged on August 25, 1969 in Basra.

“I can recall precisely how terrified and confused we were throughout the entire trial and, more precisely, the night of January 26 when the guilty verdict was announced by the military judge. We did not believe that the sentence of death by hanging would be carried out because the whole court process did not make sense, from the defendants who were not allowed to appoint their own lawyers, to the stories and accusations that were outrageous and full of lies, where the defendants were being asked to bear witness against each other.

“We waited in fear, praying and trusting in our Jewish faith and hoping for pressure to come at the last minute from the international community to end this mockery.”


But international pressure did not come - until it was too late.

The reign of terror continued. Iraq’s rulers promised that there would be further hangings. Every citizen was urged to inform against their Jewish neighbours. Scores of Jews disappeared. Linda Menuhin, now a columnist and peace activist in Israel, recalls that her own father was abducted on the eve of Yom Kippur on the way to the synagogue. He was never heard of again. “We don’t know what happened to my father exactly. Until today we have never said Kaddish for him.”

Maurice Shohet, president of the World Organisation of Jews from Iraq (WOJI), believes that the number of Jews who were executed in prison, abducted, or simply vanished without trace exceeds 50. After the American invasion of Iraq in 2003, a young Jewish jeweller, newly-wed to one of the few eligible Jewish women in Baghdad, was abducted in December 2005 and never found again.

The advent of ‘democracy’ in Iraq has left much unfinished business vis-a-vis the Jews. The vast majority of the 3,000 Jews still in Iraq at the time of the hangings had managed to escape, risking their lives, through the Kurdish mountains to Iran in the early 1970s. When the Americans arrived in 2003, there were some 30 Jews still in Baghdad. All but six have since died or fled, and anti-Jewish sentiment is running at such levels that Canon Andrew White, the vicar of Baghdad and ‘de facto’ protector of non-Muslim minorities, feels their lives are at risk as long as they remain in Iraq.

On 28 November 2008 WOJI wrote to the Iraqi Prime Minister Nouri al-Maliki with a list of Jews who were kidnapped off the street, or arrested and disappeared in prison. The organisation asked for any information about them from the thousands of documents retrieved from Iraqi intelligence headquarters. No reply was ever received.

According to Maurice Shohet, WOJI has also written to the Iraqi government following Iraqi media reports that Hebrew inscriptions at Ezekiel’s tomb at al-Kifl and the shrine of Ezra the Scribe at al-Uzair were being removed by the Sh’ia Religious Endowment directorate, which reports to Al-Maliki’s office. None of these letters received answers either.

Another source of friction is the fate of the so-called Jewish archive. The US and Iraqi governments are embroiled in a tug-of-war over priceless documents, books and Torah scrolls seized from the Jewish community and shipped to Washington for restoration. The Iraqis want the archive back, claiming it is part of Iraq’s national heritage. Others argue that the archive should be returned to its rightful owners, the Jewish community, now mainly living in Israel.

To-date, no Jew is known to have received compensation for property seized under the Ba’ath regime in spite of a claims commission set up by the interim US administration in 2003.

In meetings with the Iraqi ambassador to Washington, Samir Sumaidie, members of the World Organisation of Jews from Iraq reminded him that the new Iraqi constitution was founded on a basis of non-discrimination.

“ We applaud the new constitution,” says Maurice Shohet of WOJI. "Our goals are to protect, preserve and promote Iraqi-Jewish heritage – including holy sites, shrines and cemeteries. We will continue to pursue our goals. First among them is to find out any information of the tens of Jews who disappeared in Iraq.”

The spectre of nine bodies swinging from the gallows in Baghdad’s central square on that dreadful January day still haunts Iraqi Jews. Until the corpses and the rest of the missing Jews are returned to their loved ones, the living will not achieve closure.

Forty years since the Baghdad hangings
Posted by bataween at Friday, January 27, 2012

The mob in Baghdad was enthusiastic about the slaughter of Assyrians in 1933. See link:

The enthusiasm over the hanging of the Jews in 1969 was in character for the Baghdad mob. Now they're slaughtering each other. They're less enthusiastic about that.