Jews 'reject' calls to go to Israel - says the BBC 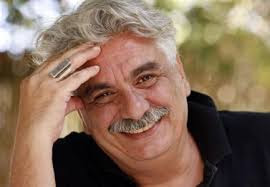 Jacob Lellouche, owner of the last Kosher restaurant in Tunis

What's the story on the Jews of Tunisia? They are defiantly rejecting Israeli calls to leave, says the BBC. (Extended article here).

BBC reporter Wyre Davies says there used to be 300,000 Jews in Tunisia ( there were never more than 120,000, but oriental exaggeration is catchy). Numbers, however, came 'crashing' down with the creation of Israel. Those dastardly Zionists, spoiling centuries of interfaith coexistence.

In other words, the BBC neatly avoids any discussion of antisemitism. Could Tunisian Jews have left to escape their historic second-class and insecure status as 'dhimmis' under Muslim rule? And how do you explain the fact that not every Jew left for Israel? We are not about to find out from Wyre Davies.

Since the revolution, he tells us, Tunisians are 'expressing their beliefs' in an overwhelmingly Islamic country. Pray what beliefs may these be? 'Death to the Jews', screamed supporters of Hamas - the Muslim Brotherhood in Gaza - at Tunis airport recently. But Rashid Ghannouchi of the Islamist Ennahda party (the Tunisian branch of the Muslim Brotherhood) reassures Wyre that Islam is a tolerant religion (although it was he who invited the Hamas leader to visit Tunisia, and his supporters who shouted anti-Jewish slogans). The government posts guards to protect synagogues. So that's all right then. Wyre is not in the mood to ask searching questions.

In contrast to news outlets like Tunisia Live, the BBC acts as a mouthpiece for the 'moderate' Islamists of Tunisia. Two dhimmi Jews are trotted out to give credence to the official line. Look, they even have a Kosher restaurant in Tunis. And a working synagogue. We are not afraid.

boy, am I happy to live in a country where insulting Jews can be punished!!!When was that ever possible when we lived in Egypt????
I complain about the weather, the cold, the snow but what's that confronted to perpetual harassement against Jews?
Thank God for small(great) mercies!
sultana Latifa

I find that some Arabs are more honest about the treatment of Jews in Arab countries than European journalists are. If I thought an Arab were honest, I would trust him more than the BBC. The beeb has an "information" policy or propaganda policy. It's a rather consistent line that has been in effect --off and on-- since at least 1939. Recall that foreign secretary Anthony Eden made a pro-Arab nationalist speech just a couple of days before the Farhud in 1941. Besides suppressing news of the ongoing Holocaust through the BBC, Eden's Foreign Office instructed the British army outside Baghdad at that time, not to enter the city and stop the pogrom/massacre of Jews there, the Farhud. The BBC at that time was clearly under Foreign Office supervision in its reports on foreign affairs. It still is today but the institutional structure has been changed to make this control less obvious.

Outnumber Palestinian refugees 2 to 1 huh? That's nonsense on a very large scale, one whole order of magnitude wrong! Jews lived fine in many Arab countries for centuries until Israel insulted the Middle East and Arab culture by foisting itself as a racist ethnocratic state into their midst. Upheaval at the point can be laid at Israel's doorstep.

No sir, it is you who is the fool. If you took a bit of time to study the material on this site instead of spouting propaganda you might become less of one.

please David change your name to Nasser or Bachir or some other scum.
we know that we can say anything we want (liberty of speeach and so on!) but you are the limit, and I'll keep it polite.
You have no right to have a beautiful Jewish name.
sultana latifa

Suzy & Bataween, many people like "David" are mentally/psychologically incapable of accepting the truth if it contradicts the lies that they have been indoctrinated with. The truth causes them cognitive dissonance, which in "David"'s case and other cases would likely make them angry.

yes, I know that and it is very unfortunate!!!Can we as a small group do anything?
it seems that the world can only listen to screams and insults!
yesterday wathing TV and the riots in Egypt it brought back terrible memories, but are people who are not Jews understand that? When they burned down some Cairo quarters in 1952 (if I remember well)we took refuge "fel settouh" (on the roof) and waited for our death. It was our Bawab who saved us by saying that there were no Jews in that building.
And as an anecdote : my grandfather had taken a kitchen knife and vowed to kill the women before they could be raped!!!
what a scene!!!
Suzy Vidal

No sir, it is you who is the fool. If you took a bit of time to study the material on this site instead of spouting propaganda you might become less of one.