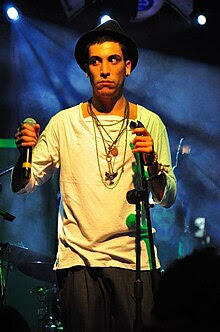 Relations may be icy at the political level between Israel and Turkey, but here's some warming news from the pop world. The Izmir-born Jewish singer and TV personality Can Bonomo will be representing Turkey at the Eurovision Song Contest:
Turkey has announced that the young singer and television personality, Can Bonomo, will represent the country in the upcoming Eurovision Song Contest which will take place in the Azerbaijani capital of Baku in May of this year.

Born into a Jewish family, Bonomo has become famous not only as a musician, but also a TV presenter, writer and radio host.

His selection has provoked a range of reaction. Some have praised the decision, saying it will pave the way for young, alternative artists who truly represent the nation, whereas others are expecting a repetition of last year where singer Yuksek Sadat failed to pass the semi-finals.

if this singer fails to make the semi-finals, it will be easier to blame "a Jew"!!!
sultana Latifa

he is a turkish citizen and we are proud of him. it is not israelis business to comment about turkish jews.

Just because his religion is Jewish does not make him any less Turkish. Turkish Jews are part of this country and we are proud of them.