Why it makes sense to be colour-blind when discussing 'colonialism' in the Middle East: AKUS, writing in CiFWatch, takes Comment is Free contributor Khalid Diab to task for his reflections on Arab and Israeli stereotypes.

His article included the following:

On a lighter note, she [Israeli student Rachael studying Islam] recalls that their group included a couple of fair-complexioned Palestinians, one of whom even had red hair. This apparently threw some of the Israelis who expected all Palestinians to look “Arab”.

The majority of Diab’s article deals with what he believes is Israelis’ surprise at the ability of Arabs to hack Israeli computer systems and stereotypical responses such as the surprise of a West Bank Arab IT professional at discovering that Israelis are human beings just like himself.

But the above reference to Rachael’s friends’ surprise at seeing “fair-complexioned Palestinians” seems to say more about Diab’s prejudices than those of Rachael and her friends.

One of the common charges leveled at Israel by those who wish to challenge its legitimacy is that it is peopled by European colonists (who should pack up and “go back to Poland, Germany America and everywhere else” as Helen Thomas notably recommended). That Diab selected the issue of Israeli attitudes to Arab “complexions” in contrast to Arab accomplishments but without a similar example from an Arab suggests that he has a frame of reference which is roughly this: Israelis are “light complexioned” and therefore are colonials, while Arabs are “ many complexioned” and therefore indigenous. Of course, it also implicitly implies that Israelis are (white) racists without any similar reference to Arab attitudes to “complexion”.

Diab even quotes an Israeli Arab woman from Nazareth who has absorbed the mantra of Jews as colonists:

“It’s not because [Jewish] Israelis don’t encounter Arabs. It’s just more comfortable for them to look down on us – it makes their colonial enterprise easier,” she contends. “If they acknowledge that we are similar, this will raise the uncomfortable question of why they don’t treat us as equals.” [emphasis added]

I would contend that the intifadas and the wedge-politics of Arab MKs and references to colonials with the implication that Jews do not belong in Israel (i.e. – which is really Arab Palestine) have had more to do with Jewish suspicions about their Arab fellow citizens than some imaginary “colonial enterprise”.

Of course, while many Israelis are “light-complexioned”, most are not. Even with the arrival of the Russian Jews in the 1980s the majority are descended from parents who fled from Arab countries in 1948-1951. 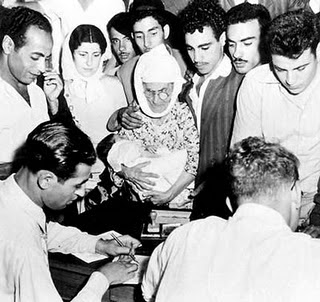 Jews who fled Iraq in 1951 register upon arrival in Israel.

To quote Diab, they “look Arab”. In addition, Ashkenazi and Sephardi Jews frequently inter-marry so most Israelis are “dark-complexioned” to one degree or another. Diab seems to view Rachael and her friends as white, blue-eyed European colonials who expect their neighbors on the West Bank conform to a dark, brown-eyed Arab stereotype.