Indian Jews on 'roots' trip to 'God's own country' 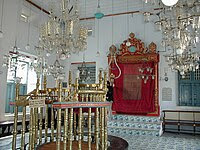 The Paradesi synagogue in Cochin, Kerala

Israeli Jews from the Indian province of Kerala have been on a 'roots' trip, reports the Indian medium NDTV. (In this article 'God's own country' is India, not Israel.)

Thiruvananathapuram: Over five decades after they settled down in Israel, a group of Kerala-born jews are back in God's Own Country on a nostalgic trip.

The 20-member team, which included 16 women, who were at the Santhigiri Ashram near here yesterday, said the long-cherished journey to their birth place was a refreshing and inspiring experience.

Many of them were born at Kochi, which had a centuries old Jewish settlement and often cited as a shining example of Kerala religious harmony.

The forebears of the Cochin Jews had come as spice traders from West Asia and the local ruler gave them permission to build Synagogues for maintaining their faith and religious traditions. But most of the Jewish families shifted to Israel last century.

"Though we have made Israel our home, Kerala has always remained a nostalgia. Now we are here with a great sense of belonging," they said.

"Kerala is not just beautiful but a land pervading with peace and harmony," said Tobia Eliace, a teacher.

Some in the team could still speak Malayalam since they had studied upto 4th class in Kerala. One of them even sang the Indian National Anthem and a couple of lines of an old Malayalam film song.

They said it was with great difficulty that they could obtain visiting visa to come to India. "I feel it like a dream-come-true. How beautiful and calm is Kerala."

Read more at: http://www.ndtv.com/article/kerala/kerala-born-jews-on-nostalgic-trip-to-gods-own-country-170619&cp
Posted by bataween at Sunday, January 29, 2012