If in a tight spot, hold Jewish-Muslim dialogue 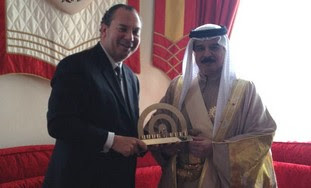 When you're in a tight spot, make nice with the Jews. Sorry to sound cynical, but his Jew-friendly policy has gained brownie points in the past for King Hamad bin Isa al-Khalifa, who rules the giant US aircraft carrier they call Bahrain - despite facing stiff resistance from his disenfranchised Sh'ia majority. And, as the Jerusalem Post reports, Marc Schneier is not one to pass up another chance for interfaith dialogue. (with thanks: Lily)

Iran is a common threat to Bahrain, Israel and the US, the King of Bahrain Hamad bin Isa Al Khalifa was quoted as saying by a Jewish official on Sunday.

Rabbi Marc Schneier, vice president of the World Jewish Congress, said the king told him he was alarmed by the Islamic Republic during a 45- minute meeting held in the capital city of Manama late last month.

“I made a point how it’s ironic how we share a common enemy and he acknowledged that Iran has been a threat,” said Schneier, who gave the king a hanukkia at the end of their conversation.

The oil-rich island nation has a troubled history with its northern neighbor across the Persian Gulf, which once laid claim to its territory.

Schneier said Hamad agreed to his request to host a Jewish-Muslim dialogue in the oil-rich country later this year. The rabbi, who is also president of the Foundation for Interfaith Dialogue, said there was no set date or list of participants yet but that the conference would aim to improve ties between the Abrahamic faiths.

The news comes at a time when the Sunni elite that rules Bahrain has been accused of oppressing the country’s Shi’ite majority.

Schneier said he did not believe Hamad was reaching out to Jews to rebuff charges of religious intolerance against him, saying the ruler had “implemented reforms and reached out to his opponents and tried to help.”

He said it was imperative to hold talks between Jews and Muslims now because the perfect conditions to conduct such a conversation would never arise.

Read article in full
Posted by bataween at Monday, January 09, 2012

While it is true that generally these measure are essentially brownie points, Bahrain ruling family does have a history of being more tolerant (inspite of it's populace attitude) and currently it's US ambassador is a Mizrahi Jewess.

When
israel warned the world of Iran's danger, no one listened.And now we could be facing a war for the Hormouz straights.
suzy vidal

Funny how some Muslims turn to, or depend on Jews when they need it. Guess they regret cleansing their own population.

that's the price they have to pay for kicking out their Jews.
Sometimes I marvel at the intellectual riches of our Egyptian Jews!
But Arabs are so jealous that they apply what Samson cried out "sur moi et mes enemies." Fools!!!
sultana latifa