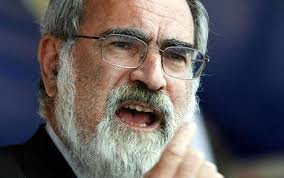 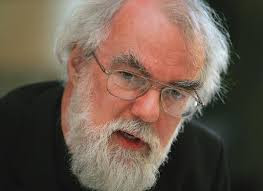 Here's one story I missed earlier: on 9 December 2011, the UK House of Lords agreed a motion noting the situation of Christians in the Middle East. The debate turns up some surprising results: the Archbishop of Canterbury (pictured left) speaks of the historic Jewish communities of the Maghreb and Middle East. Lord Patten, who is not known for his sympathy for Israel, speaks eloquently of the plight of Jews and the pernicious antisemitism of the Middle East. Lord Sacks (pictured right), who as chief rabbi might be expected to mention Jews, says not a word about them. Only Lord Turnberg states clearly that 700,000 Jews were driven from the Middle East - and were it not for Israel they would be dispersed as refugees around the world. (With thanks: Lily)

The Archbishop of Canterbury: My Lords, many people these days have a short and skewed historical memory. It is all too easy to go along with the assumption that Christianity is an import to the Middle East rather than an export from it. Because the truth is that for two millennia the Christian presence in the Middle East has been an integral part of successive civilisations- a dominant presence in the Byzantine era, a culturally very active partner in the early Muslim centuries, a patient and long-suffering element, like the historic Jewish communities of the Maghreb and the Middle East, in the complex mosaic of ethnic jurisdictions within the Ottoman Empire and, more recently, a political catalyst and nursery of radical thinking in the dawn of Arab nationalism. To be ignorant of this is to risk misunderstanding a whole world of political and religious interaction and interdependence and to yield to the damaging myth that, on the far side of the Mediterranean or the Bosphorus, there is a homogeneous Arab and Muslim world, a parallel universe. I do not need to elaborate for your Lordships the dangers we invite in accepting any such assumption. The Middle East is not a homogeneous region, and the presence of Christians there is a deep-rooted reality. We are not talking about a foreign body, but about people who would see their history and their destiny alike bound up with the countries where they live, and bound up in local conversations with a dominant Muslim culture, which they are likely to see in terms very different from those that might be used by western observers.

Yet at the present moment, the position of Christians in the region is more vulnerable than it has been for centuries.

Lord Patten: My Lords, I am a bit gloomier than the most reverend Primate about things to come in the Middle East, which will be reflected in the three points that I have to make.

First, I stress my belief that we are facing religious cleansing in parts of the Middle East and may be entering what might be thought of as an Arab winter for Christians, Jews and other minority groups alike on a scale that we have not hitherto seen. We have heard about what is going on in Iraq, and I reflect that if some of the movements that are already happening were addressed not at faith groups but at ethnic groups, or those of this or that personal preference, the whole bang-shooting match of outrage in the United Nations-with Secretary of State Clinton flying in to try to deal with the issue-would have been released. Yet we do not seem to see that with religious freedoms. Secondly, in our religious comfort zone in the West we have to recognise that we have much to learn from those who are threatened in the Middle East. Thirdly, we must persuade our rulers to treat religious freedoms as being just as basic as other, much vaunted human rights. Religious freedoms belong in the premier league of human rights; in that context, I entirely agree with what the right reverend prelate the Bishop of Exeter has just said.

On my first point, to exemplify the Arab winter, it seems clear that all non-Islamic faith groups in the Middle East are in it together. It means facing up openly to the fact that some Islamic groups, however many good and moderate adherents there may be, are self-professed militants against Christians and Jews alike. We evidence this in their own words and actions. One sad manifestation of this in the western world today is not just to brush this issue under the carpet but to feel that it is not possible or polite even to talk about it in decent society. Yet the fate of Christians in the Middle East is indivisible from the fate of Jews there, for example, and indeed from other minority Muslim groups such as the Alevi adherents of Shia Islam who are so discriminated against, even in Turkey today with its increasingly authoritarian Government.

There can be no walking on the other side of the faith road in the Middle East in the face of a self-declared agenda by some of religious cleansing in some parts of the region. We must not do that any more than we can, even in the Palace of Westminster, ignore the manifestly Newspeak anti-Zionism, which concentrates as a surrogate on the Jew as a nation-I borrow from the noble Lord, Lord Sacks, on this-rather than on the Jew as a person, as it was in the old-style and now wholly non-PC anti-Semitism. At least in the Middle East, people are honest about it; we should be honest about it here.

However threatening this may be perceived to be in this country it is nothing like the threats facing the last Jews in Baghdad, nor the last few Jews in Iran. But then, it cannot be very nice for the last remaining 13,000 of my co-religionists left in Iran either. The pace of religious cleansing is gathering. Only this week, the organisation Minority Rights Group International introduced figures to show that while in 2003 there were between 800,000 and 1 million Christians of different brands and classifications in Iraq, the few years since have seen the numbers leach away to fewer than half a million. In his own words, not my suppositions, we heard it again earlier this week when Archbishop Sako, the leader of the highly threatened Chaldean Catholics in Kirkuk and the surrounding regions, despairingly said: "It is a haemorrhage. Iraq could be emptied of Christians".

Lord Turnberg: There are now barely 50,000 Christians in the whole of the West Bank. Of course, Christians are not alone in being chased out. The Baha'i faith has been eliminated from Iran and other Middle East countries, and the Jews have a long history of persecution in the region. No fewer than 700,000 Jews have been driven out in the past 50 or so years; were it not for the existence of Israel, they would be refugees and dispersed around the world. It is also the case that I as a Jew would be very unwelcome in many of these countries; in fact, I would find it very hard to visit Saudi Arabia as I would not be given permission.

This is troubling indeed at a time when we in the UK and the largely Christian western societies are quite rightly leaning over backwards to accommodate people of every race, creed and religion. You have only to look around your Lordships' House to see our tolerance of diversity. At the same time, fundamentalism is increasing in the Middle East along with a dangerous anti-Christian intolerance.

There are two exceptions-possibly more-to this general pattern: Jordan and Israel.


Lord Sacks: First, on the Arab spring, which has heightened the fear of Christians in many of the countries affected, we make a great intellectual mistake in the West when we assume that democracy is, in and of itself, a step towards freedom. Usually, that is the case, but sometimes it is not. As Alexis de Tocqueville and John Stuart Mill pointed out in the 19th century, it may merely mean the "tyranny of the majority". That is why the most salient words in the current situation are those of Lord Acton, in his great essay on the history of freedom, who said:

"The most certain test by which we judge whether a country is really free is the amount of security enjoyed by minorities".

That is why the fate of Christians in the Middle East today is the litmus test of the Arab spring. Freedom is indivisible, and those who deny it to others will never gain it for themselves.

May God protect Christians of the Middle East and people of faith who suffer for their faith, whoever and wherever they are.

Looking at them and their lack of action, God will surely have to save them as these vapid fools will not!!

It's hard to take Rowan Williams seriously. He's said he welcomes Sharia in the UK and that Anglicanism is interchangeable with any of the other Protestant faiths, well the ones that are tolerant of gay marriage at any rate. And truth be told, so what. It's what most Brits believe anyway but it's hardly a position for the leader of a Church to take and say aloud. If Williams could find a mainstream branch of Islam that's gay friendly he'd convert to it.