Being an 'Arab Jew' could be good for business 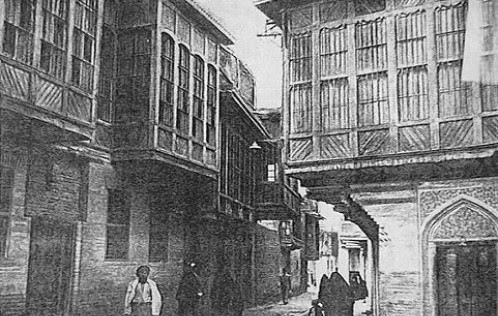 Na'ava Mashiah has written a gushing article pitching herself as an 'Arab Jew'. In fact very few Jews would described themselves thus, unless they are far-leftists. Her account of why Jews like her grandfather left Iraq is only partially correct: what about the rise of pro-Nazi feeling and the Farhud of 1941? Regrettably her motivation for ingratiating herself with the Arab world seems to be purely economic (with thanks: Andrew):

The growing rift between Israel and the Arab world makes it hard to imagine that Jews and Arabs once coexisted across the Middle East. At one point these identities could be found not only in the same neighborhood, but even in the same person.

Is it an oxymoron to be an Arab Jew? An Arab Jew refers either to a Jew living in the Arab world or whose ancestors came from Arab countries. This term flourished once in the Middle East but is not widely known today. Not long ago there were Jews living in the cities of the Middle East who were integrated into their societies and held influential roles in their communities and economies.

My grandfather, Baba Yona Mashiah, was such a figure in Baghdad. He was, I would say, an Arab Jew. My childhood was sprinkled with stories of his grand personality, power and business acumen. He was a prominent land and real-estate developer and in the 1940s contributed to building “Baghdad el Jedidah”, a chic neighbourhood in the Baghdad suburbs. His partners were mostly Muslim and some were prominent government officials.

Over the years I have accumulated stories about Baba Yona like pearls on a string and play with these beads, just as he played with the beads on hismisbaha,the traditional Muslim prayer beads. My father recalled how he used to accompany my grandfather, who was also known by the Arabic name Abu Fuad, to meetings in cafés and the respect that people showed him.

Baba Yona was an integrated member of Baghdad society and its business world, yet he was a Jew.

In the 1950s the Jews of Baghdad experienced an exodus from Iraq. A reluctant exodus, I would claim, which was brought about by a combination of increasing Zionism, anti-Semitic propaganda, envy of the privileged life Jews had when Iraq was under British control and the creation of Israel. The displacement of thousands of Palestinians and the humiliating defeat of the Arab armies were the final blow.

Life had become unbearable for the Jews and even those who had wanted to stay were compelled to leave. Jews were assumed to be a fifth column and turned into scapegoats following the defeat of Arab armies by the Israeli Defense Forces. Baba Yona watched his empire crumble. His peer and neighbour, Mr. Addas, another influential Jew, was hung in the square. He himself was imprisoned for three months, accused of having Zionist connections.

At a certain point the Iraqi government offered a deal for Jews, inviting them to escape to Israel if they would renounce their citizenship and relinquish their property. Baba Yona was forced to leave Baghdad with over 100,000 other Jews to the one country that would accept them at the time – Israel. Ironically, the Zionists, whose movement played a part in alienating Muslims from their Jewish compatriots, were there to save them.

So as they were airlifted out of Baghdad, did my nine year-old father know where he was headed? Was it en route to Cyprus and during the eventually landing in Israel that he stopped being an Arab Jew?

In Israel the younger generations became embarrassed by their Arabic-speaking parents. My father, Sabah, was given a Hebrew name, Shaul; but his brother who had arrived in his late teens, too late for a name change, is called Jamil until this very day.

In fact, my father’s Arab identity was totally effaced in Israel. It was a combination of external pressures and self denial. Thus he became successfully integrated into the dominant culture in Israel of that period.

My interest in my Arab roots began about 10 years ago when I established my business, which focuses on economic cooperation between Israel and the Middle East and North Africa (MENA) region. Many Israelis asked me why I had chosen to do so. The notion that Israel should forge economic ties with other countries in the MENA region is not self-evident within Israeli society. (It is even less so within Arab society - ed).

Pathetic. She's just as, if not worse then, the Jews nowadays who long for the days of the Diaspora. She ignores the history of persecution and humiliation (actual humiliation, not anger at having incompetent soldiers and leaders). She ignores the rise of Arab nationalism/pan-Arabism, which consisted entirely of Christians and Muslims, and which led to genocide, persecution, and more 'humiliation' inflicted on non-Arabs. And hell, she seems to think that Israel just 'made' the Iraqis turn against their neighbors; they seemed to be awfully quick to turn against them.

It must be fun living in the delusional world that places Israel as the cause of Jewish suffering and hatred in the world.

... and if
i tell you that I want nothing to do with Arabs, would you believe me??????
That is explicite enough!
sultana Larifa

Couldn't bring myself to click the link to read more... I have a good friend who is in a way a similar case, i.e. her father was also in real estate, and of course they lost everything (not from Iraq) - it would never dawn on her to call herself an "Arab" Jew. She's now an old lady, and boy, she could use a bit of compensation for the prime real estate that is now a fancy downtown area in a big Arab city.