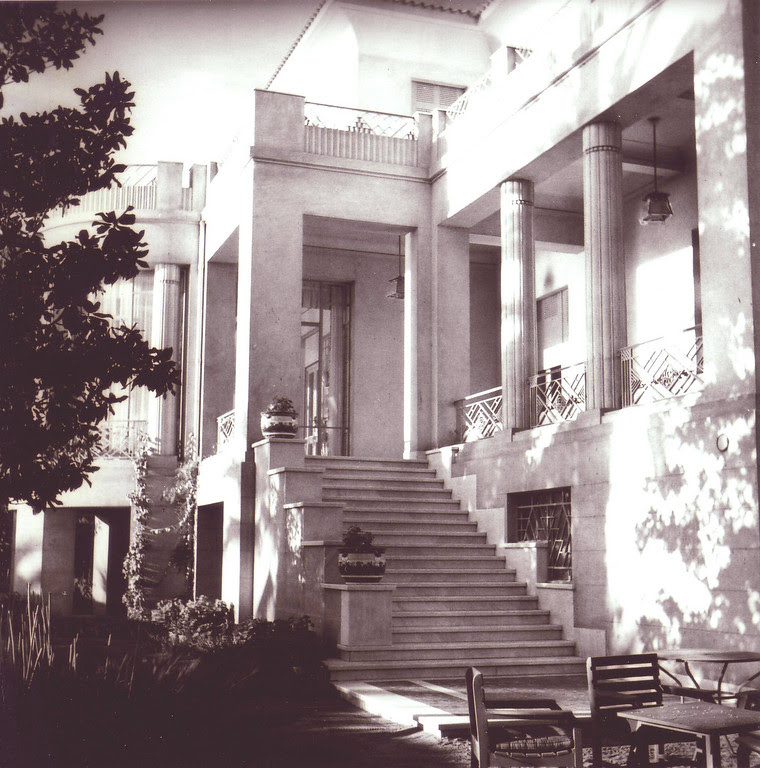 House at Giza, Egypt, belonging to the Castro family

Update: in a likely response to the Israeli drive for compensation for seized Jewish property in Arab lands detailed below, Egyptians are demanding $500 billion for alleged 'damage' by Israel to the Sinai. Via Elder of Ziyon.

If the Israeli government decides to pursue compensation claims on behalf of Jews who lost property in Arab countries, it is safe to assume that our Arab friends will be somewhat alarmed at the prospect. How else to explain a flurry of articles in the Arabic press?

According to the pro-Hamas/Muslim Brotherhood Middle East Monitor :

The Director of Property Management at Israel's Foreign Ministry is preparing a draft bill which, if passed into law, will see the Zionist state sending claims for compensation for Jewish property in a number of Arab countries. It is believed that the bill will be held back to be used during any negotiations discussing the situation of Palestinian refugees and their right of return.

The bill is divided into two: the first will demand that Egypt, Mauritania, Morocco, Algeria, Tunisia, Libya, Sudan, Syria, Iraq, Lebanon, Jordan and Bahrain pay compensation for the properties of 850,000 Jews, with an estimated value of $300 billion. The figures are based on the 1948 census of Jews from each country.

There is no such person as the Director of Property Management at the Israeli Foreign Ministry, unless it is the person who looks after foreign embassies and consulates. Secondly, it is not up to the Israeli Foreign ministry to draft bills. Thirdly, I know of no Jews who ever lived in Mauritania. Fourthly, there was no 1948 census carried out.


It gets more bizarre:

At a second stage, Saudi Arabia will be landed with a compensation bill of more than $100 billion for Jewish properties in the kingdom since the time of Prophet Mohammed (peace be upon him). Apparently, Israeli experts in international law, history and geography in the universities of Bar-Ilan, Beer Sheva, Tel Aviv, Jerusalem and Haifa are working on this part of the claim. The budget for their work has been taken from the Foreign Ministry and is claimed to be in the region of $100m for 2012.

An Israeli Foreign Ministry spokesman denies there is any truth to this report.

"This article is so full of ridiculous assertions, I wouldn't know where to begin," he said.

And try this for size:

Compensation for the alleged hundreds of dead and missing Iranian Jews in Iran whose fates are unknown will be set at $100m.

The numbers of dead and missing Iranian Jews do not run to 100s, and Israel has never made any compensation claim for $100 m.


All in all, this article appears to be another product of the over-active Arab imagination - or perhaps guilt for ill-treating their Jews?

Thankfully, nobody has thought to bring up this Arab claim for compensation dating back to the time of the Exodus from Egypt. (It makes claims for property seized at the time of the Prophet Mohammed look quite reasonable...)

There is no better deterrent than your enemy's own imagination.

We are the only country in the world who can bring our foes' brain to the frying point without even lifting a finger.

They are worried, very worried....

Even though its a joke, I am personally content with monotary compensation from the time the founder of islam slaughtered the Jews in Arabia to today and I am sure other surviving non-muslim groups will be looking for restitution as well, after all its not like the muslims arabs cannot afford it or anything what with the oil money and all.

Perhaps also include a posthumous memorial to the victims of Islamic aggression at Yahrib or somewhere less likely to be desecrated.

The claims of Jews from Arab lands seem proposturous to me, and not because they are false but becuase of the lack of proof. The Nazis had consigned everythin in their books and so it was easier for the German Jews to claim . My cousins from Austria got back what they claimed...

How will my grandfather and uncle rise from their tombs to claim damages for their shop in El Muski?
It will take another lifetime or even two and end up like a hole in water.Yaani, nothing.
But it's true that This is a way of getting Arabs mad at us.I would most of all like to see that Nawas director of antiquities eat his words and admit that Jews built their lousy Pyramids. He is so full of himself!!!
Sultana LAtifa
!