Afghan scrolls could be most significant find yet 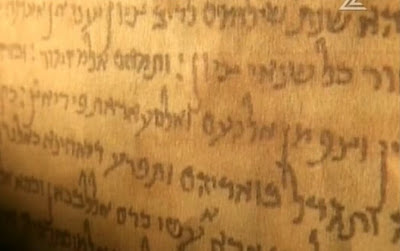 Screenshot from the Channel 2 report

The Jewish scholarly world is abuzz over the discovery of ancient Jewish scrolls in a cave in Afghanistan’s Samangan province, Israel's Channel 2 reported last week. From the Jerusalem Post, via Elder of Ziyon.

According to Arab Affairs correspondent Ehud Ye'ari, if validated the scrolls may be the most significant historical finding in the Jewish world since that of the Cairo Geniza in the 19th century.

“We know today about a couple of findings,” Haggai Ben-Shammai, Professor Emeritus of Arabic Language and Literature at Hebrew University was quoted as saying. “In all, in my opinion, there are about 150 fragments. It may be the tip of the iceberg.”

The scrolls, which were part of a geniza, a burial site for sacred Jewish texts, date from around 1,000 years ago and are in Arabic, Judeo-Arabic and ancient Persian.

One scroll, whose replica was shown to the cameras, is apparently a dirge written for an important person whose identity has not been determined.

Other texts said to be found include an unknown history of the ancient kingdom of Judea, passages from the book of Isaiah and some of the works of Rabbi Saadia Gaon, a medieval sage.

In addition, rings with Jewish names like Shmuel Bar Yosef inscribed in Hebrew on them have surfaced.

The area in which the findings were discovered is on the so-called Silk Road, a trade route that connected Eastern Asia with the Middle East and Europe which Jewish merchants often traveled.

Ye'ari quoted sources as saying the scrolls were first moved to Peshawar province in Pakistan and from there had been sold to antiquities dealers around the world in Geneva, London, Dubai and Jerusalem.

Read post in full
Posted by bataween at Thursday, January 05, 2012

that is just great!
Suzy

can someone tell me how the bukharan jews of Peshawar managed to come to Israel? via Afghanistan after 1951?

4,000 out of the 5,000 Afghan Jews left for Israel in 1951. Until that date they were forbidden to emigrate.I should imagine that the Jews of Peshawar left alonside the Jewish of Kabul and Herat. You will find more information in 'The demise of the Jewish community of Afghanistan' by Sarah Beth Koplik.


According to a comment left in September 2011 there are still two Jewish families in Peshawar.
http://jewishrefugees.blogspot.com/2008/03/untold-story-of-jews-of-pakistan.html