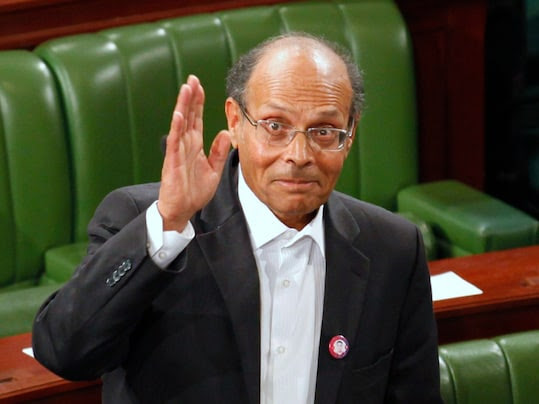 Now don't all rush back at once, will you? Tunisia's newly elected president called Monday for the country's Jewish population to return, in statements carried by the state news agency.

(Associated Press): During a meeting with the country's Grand Rabbi Haim Bittan, President Moncef Marzouki said that Tunisia's Jews are full citizens and those that had left were welcome to return. His comments come almost two weeks after Israeli deputy Prime Minister Silvan Shalom called on the country's remaining Jews to emigrate to Israel.

Tunisia presently has a Jewish population of 1,500, but in the 1960s there were 100,000. Most left following the 1967 war* between Israel and Arab countries, and Socialist economic policies adopted by the government in the late 1960s also drove many Jewish business owners out of the country.

The rise of Islamists prompted Shalom — during a Dec. 6 memorial ceremony for Tunisian Jews who died in the Holocaust— to call on Tunisia's Jews to flee the country for the safety of Israel.

The Islamist Ennahda Party has stated that Jews in Tunisia are full citizens with full rights. A number of prominent Jews in the country have rejected Shalom's call.

Posted by bataween at Wednesday, December 21, 2011

That would be insane. Tunisia will be an Islamist cesspit straight out of the Dark Ages in a few years. And even if Jews were foolish to go, where are their reparations?

No worries, Trudy. If Jews are going anywhere, it will be out of Tunisia

That's awesome! I'm not even Tunisian - I'm of Egyptian origin - but I think I'll accept Mr. Marzuki's invitation too.
It still amazes me how these guys have no shame or even a tiny notion of how ridiculous they are.

Reparations? That's a good question. They always talk about "full rights" and all this crap, but not even in their shameless propaganda they dare to mention anything about reparations.

Moncef Marzouki is an intellectual human rights activist, a socialist who has lived most of his adult life in the West, who knows how to talk to it, and it is for that reason that he is President as part of an Islamist majority coalition.


But make no mistake: Marzouki is no Israel lover, and whoever now pulls the strings in Tunisia is the Prime Minister, who is a member of Annahda party. Indeed, a mini-constitution was voted recently (some say it was hijacked) that gave greater powers to the Prime Minister.

Having said that, it is not impossible that he realizes that the treatment of Jews in Arabo-Muslim countries in the period of the independences has only strengthened Israel.

Would Jews go back? Some will. The owner of the "Mizrahi" radical leftist website "Kedma" has retaken the Moroccan nationality a year or so ago. I don't know what he is doing with it since I don't believe he lives there. Perhaps there is a connection there to the fact that recently the 10 year old website announced it was ceasing activity (although the archives are still there and visible).

This appears to be a trap!

smart speech! Get them (Jews )back, make them work and add to the riches of the ocuntry and then one day all of a sudden they will be kicked out like stray animals with nothing in their hands.As for indemnities: INCHALLAH
Smart Alecki!
sultana vidal