A tale of two Arab poets - one bigoted, one not

I was struck by two contrasting stories in the news recently. On the one hand, the Palestinian participants at a literary fest in Marseilles, France, only agreed to attend if they did not have to sit with Israelis (this view was not shared by other participants, like Tahar Ben Jelloun of Morocco). The mere presence of an Israeli in the hall was too much for Najwan Darwish, a Palestinian poet.

On the other hand, I found an example of a brave Iraqi poet not afraid to stretch out a hand of friendship towards his fellow poets in Israel.

In the first case, the Israeli writer Moshe Sakal was excluded from a panel discussing the Arab Spring at the Marseilles literary festival. But even Sakal's entrance into the hall caused an ugly scene.

"Sakal, who entered the hall after the discussion had begun so he could listen to it, was somewhat surprised when his entrance caused a stir.

"I entered the hall just as [Moroccan poet] Tahar Ben Jelloun was speaking forcefully against this type of boycott," Sakal said. "He said that there are many Israeli authors who are supportive [of the Palestinian cause] and one should speak to them even if one doesn't approve of current Israeli politics."

"There were hundreds of people there and there were a lot of hecklers," Sakal said. "People were very upset."

"Darwish, said Sakal, accused him of expelling him from his home, and said "the Jewish-Arabs [Jews from Arab lands] particularly hate the Palestinians."

"Sakal, who is of Syrian and Egyptian origin, said he told the crowd "I understand them but I also understand my situation, and the one thing that distressed me was that he didn't try to find out who I am or what my views are."(My emphasis)

Sakal is frustrated that no-one in these rarified literary circles is prepared to hear his views, his story or where he is coming from. Jews from Arab countries are branded as Arab-haters but their narrative of being driven out of their homes is ignored and despised.

Compare and contrast the bigoted Najwan Darwish with Dr Jabbar Jamal al-Din, a poet and lecturer at Al-Kuffa university in Iraq. From Ynet News (Hebrew):

Dr Jamal al-Din wrote to Balfour and Herzl Hakkak, Israeli poets of Iraqi origin born in 1948, seven years after the Farhud. He was aware that the Hakkak twins had lost two uncles in the 1941 pogrom.

"Their birth showed that the Jewish people engenders compensation for grief, spiritual giants are born and rise like a volcano, a landmark in building the most splendid cultures. Herzl and Balfour are now messengers of friendship and love between peoples," he wrote.

Dr Jamal al-Din also wrote a poem for Gilad Shalit which was translated into Hebrew and posted online. 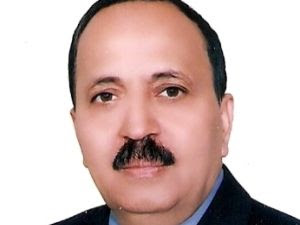 Shmuel Moreh, emeritus professor of Arabic Studies at the Hebrew University, praises Dr Jamal al-Din for founding an important group of professors in Iraq, an Iraq-Jewish friendship Association. "They dare to break the wall of hostility and hatred toward the Jews and spread the love of Israel among their students and encourage them to write their master's and doctoral work on the Jewish contribution to the building of Iraq, " he writes.