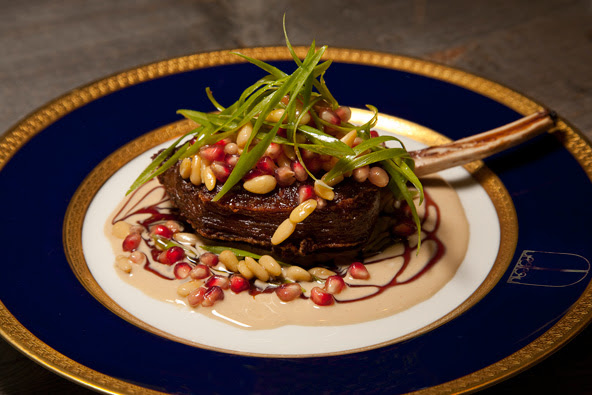 Venison served up on plates once belonging to the Iraqi royal family and bought on Ebay. The date syrup, pine nuts and pomegrates recall Iraq (Photo: Battman studios)


With thanks Maurice; Elsie

This bizarre story brings together the New York art world, the Iraqi government and a collection of dinner plates that once belonged to Saddam Hussein and the King of Iraq, Faisal ll. Absent in the press coverage, however, is any hint that the return of the plates to Iraq sets a dangerous precedent:

From the New York Times:

(...) "on Tuesday a marshal and a marshal’s assistant arrived at the organization’s offices in the East Village to take custody of an even more unusual trove of cultural booty: Saddam Hussein’s dinner plates, or at least some of those that were believed to be in use in his palaces when the United States invaded Iraq in 2003.

"The plates were taken out of the country illegally, according to Iraqi officials. Creative Time, which bought them on eBay for Michael Rakowitz, an artist whose Iraqi-Jewish grandparents fled Iraq in 1946, said it believed that an American soldier and an Iraqi citizen first bought them from Iraqis who had looted and carried on a brisk trade in such palace wares some time after the invasion.

"The 20 or so plates include a mix of Wedgwood and other china, some that appear to be from Hussein’s personal collection and others from the reign of the last Iraqi monarch, Faisal II, who ruled until 1958."

Rakowitz used the dinner plates for an art project at a New York restaurant illustrating the discomfiture diners feel when they discover where their plates come from. He personally could not bring himself to eat off Saddam's plates.

Rakowitz's reaction to the arrival of the federal marshals was : a 'profound and beautiful' end to the project.

Evidently Rakowitz is unaware that the return of property claimed by the Iraqi government sets a dangerous precedent for the books, documents and artefacts - known as the Jewish archive - currently being restored in Washington. On several occasions, the Iraqi government has asked for these items to be returned.

The return of the plates gives credibility to the Iraqi government's efforts.

It would be a tragic irony if US federal marshals became accomplices in Iraq's campaign to have Jewish items returned to the country which were themselves looted from their Jewish owners by previous Iraqi regimes.

Iraq museum pays smugglers for looted treasures (with thanks: Maurice)

now that is strange:
I did not know that Sadam ate out of a plate!!!!
suzy vidal

now why use cutlery when we have fingers?