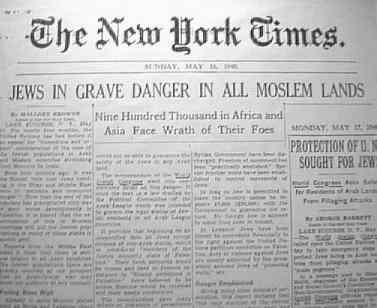 The Guardian's Comment is Free website signed off 2011 with a warning from Rachel Shabi that minority rights are the litmus test of Arab Spring democracy. True - but what about state-sanctioned antisemitism resulting in the ethnic cleansing of the Arab world's Jews ? The monitoring blog CifWatch picked Shabi up for a grave moral inversion. Its response began with a nice plug for this weblog (thank you, Adam Levick):

Yes, in a mere fifty years roughly one million Jews were expelled from Arab lands for the sole crime of sharing the religious identity of the resurrected Jewish state. Thousands of communities were wiped out of existence, as well as the world’s collective imagination – those for whom nobody (and no UN agency) will speak. And, in less than fifty words ‘Comment is Free’ contributor Rachel Shabi morally absolved Arab rulers who initiated the ethnic cleansing of Jews of the guilt typically assigned to those who commit such reprehensible acts.
Shabi’s latest CiF essay, “Equality must be the legacy of the Arab Spring“, included this moral obfuscation:

the main reason Arab countries were all but emptied of Jewish communities during the 1940s and 1950s [was that] the ideologies of Zionism and Arab nationalism…yanked at opposing ends of hyphenated Arab-Jewish identities and forced them to fall apart.

It’s vitally important that you read, and re-read, this passage to fully appreciate the art of Shabi’s moral inversion.

In a remarkably thrifty polemic apologia for antisemtism, Rachel Shabi distributes guilt for the expulsion of one million innocent Jews evenly between two abstractions: Jewish and Arab “nationalism”.

However, it is simply undeniable that Jews were expelled from their homes by quite particular Arab rulers – those who cynically exploited prevailing antisemitic mores to justify freezing Jews’ bank accounts, confiscating their assets and expropriating their property, revoking their national citizenship, and inciting murderous riots.

It is not an overstatement to compare such measures which stripped Jews of their citizenship to the Reich Citizenship Law of 1935 (Nuremberg laws), and Arabs’ theft of Jewish assets (estimated to be valued at over $100 billion) are similarly analogous to Nazi measures against Jews initiated in the late 1930s.

Actually, it was Stan Urman of JJAC who wrote these words, but thanks for the compliment- ed

Read article in full
Posted by bataween at Monday, January 02, 2012

This is "the good news" of the day.
It has brightened a shabby day!
And who is she anyway: as my mom used to say!
suzy vidal

I am certain I am going to say something most of you will reject:
You are giving too much attention to Ms. Shabbi.
Otherwise she would be totally unknown! By doing so, you promote whatever she is doing whether speech or ..
that's my opinion.
sultana